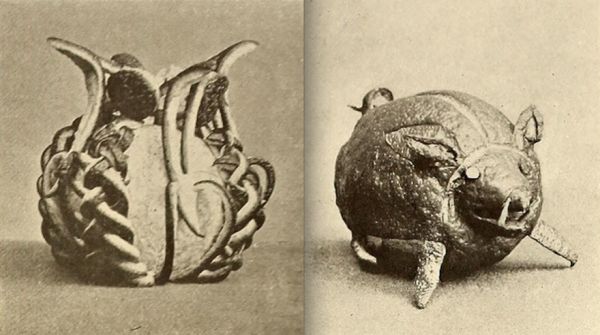 The most creative thing I ever did with an orange is cover it in whole cloves to make a pomander, like my Grandma did. Some folks were a little more creative, as shown in a 1905 article in the magazine American Homes and Gardens. It had instructions for ornamental orange sculpture, using the semi-detached peel to make intricate designs, as illustrated on the left, or representative objects, like the pig on the right. The photos progress into ridiculously pretentious Christmas party centerpieces that you can see at The Public Domain Review. This was probably one of those magazine tips that readers may have admired, but few ever attempted, because oranges were an expensive treat outside of states that grew them.  -via Digg