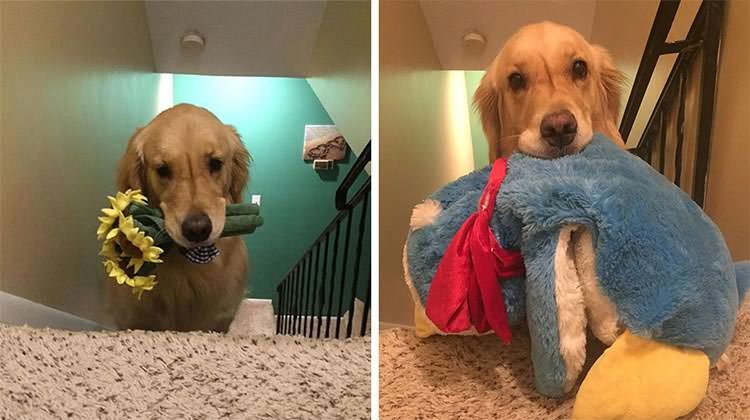 It’s adorable, and shoutout to the owner for having a lot of toys for their beloved pupper-- because that’s love right there!

Meet Mojito, a one-year-old therapy dog that has a very unique night routine. Before she goes to bed, Mojito goes through her pile of toys to choose a toy to accompany her in her sleep. If you’re worried that the dog does not have enough toys for variation, worry not because Mojito gets new toys every month in a new BarkBox.

According to Kim Downie, her mom, “she is very specific about what she chooses to take to bed. She will search the house and empty her toy boxes until she finds whatever one she is looking for. If we move them back downstairs, she will carry them right back up.” 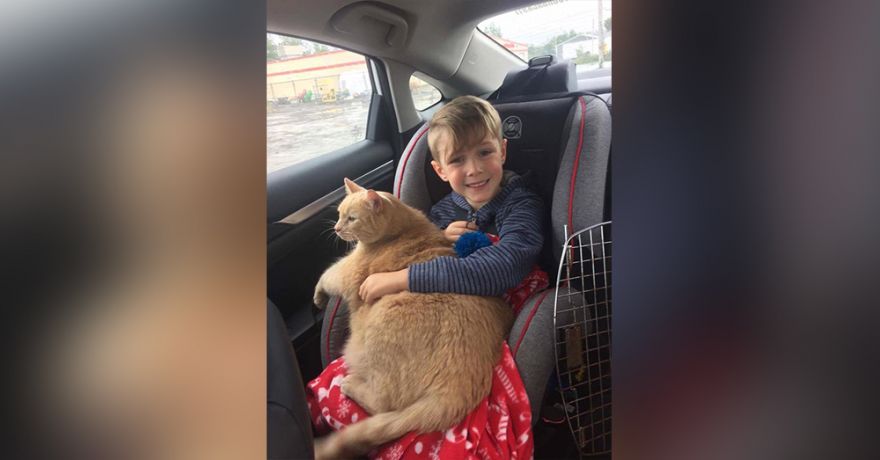 Easton, a young boy from Canada, picked a 10-year-old cat named Tiny from a long list of animals at the Exploits Valley SPCA Adoptables Facebook page. Tiny is a ginger cat that is “weight-challenged” as well as “shy.” However, that did not stop Easton from taking the big chonk home. 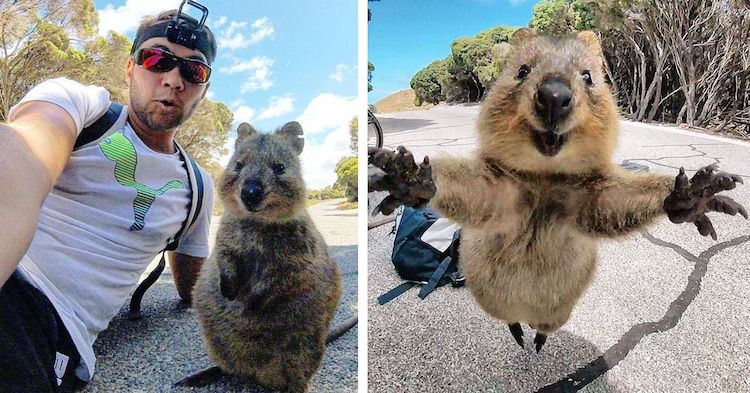 The quokka has chosen thee!

While on a bike ride on Rottnest Island in Western Australia, Campbell Jones and his girlfriend met a quokka on the bike trail. Upon spotting the creature, Jones got off his cycle and snapped some selfies with the curious animal. The quokka, known as  “the happiest animal on Earth,” posed for the pictures with a smile. What a sport!

A surprising development in this story is that the quokka actually chased after the two bikers when they were done taking photos.  “As I walked back to my bike, the quokka chased after me,” he told Western Australia's newspaper, Perth Now. “I put down the GoPro and it jumped at me as if to say come ‘come back.’” 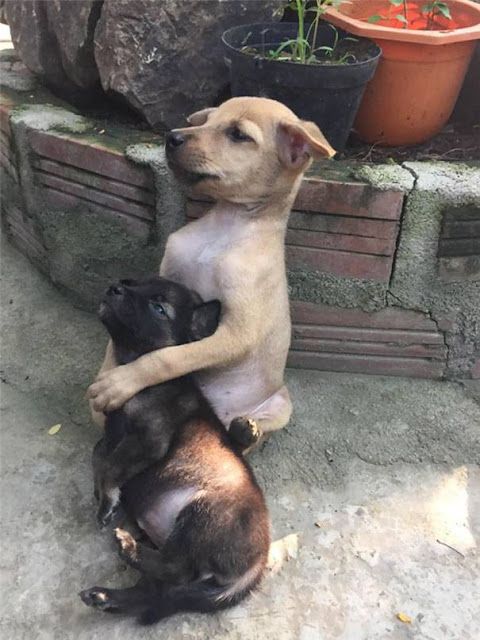 Two stray dogs wandering the streets of Ho Chi Minh City, Vietnam, went viral for hugging each other. The photos of the two puppers providing safety and comfort to each other from the harsh streets were loved by the Internet. Don’t worry, as these two dogs are now safe and sound in a Buddhist temple, as Buddhist nuns took them there to provide shelter. 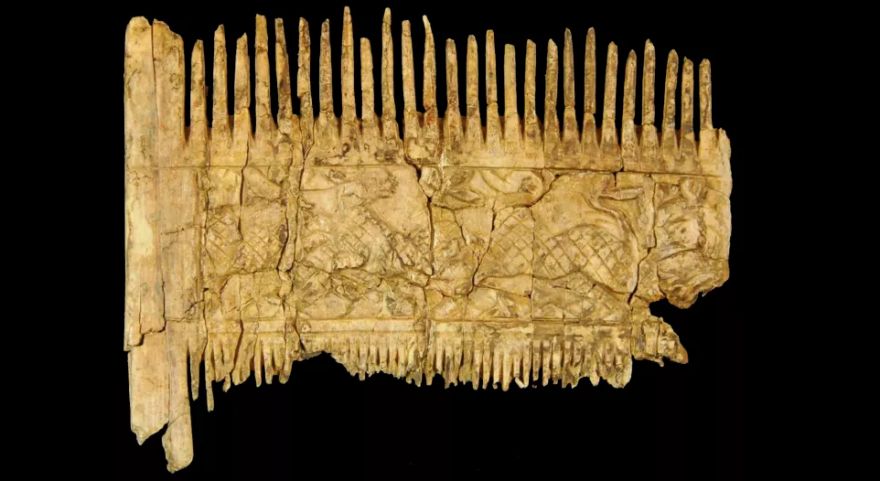 A grave of a wealthy medieval man in Bavaria, Germany, was discovered by the Bavarian State Office for Monument Protection (BLfD). The man, estimated to have been around 40 to 50 years old when he died, was buried with weapons, a horse, and a set of luxurious toiletries-- such as an intricately carved ivory comb that may have been used to style his hair and beard. Experts believe that he may have been a fierce warrior who also cared deeply about his personal appearance. 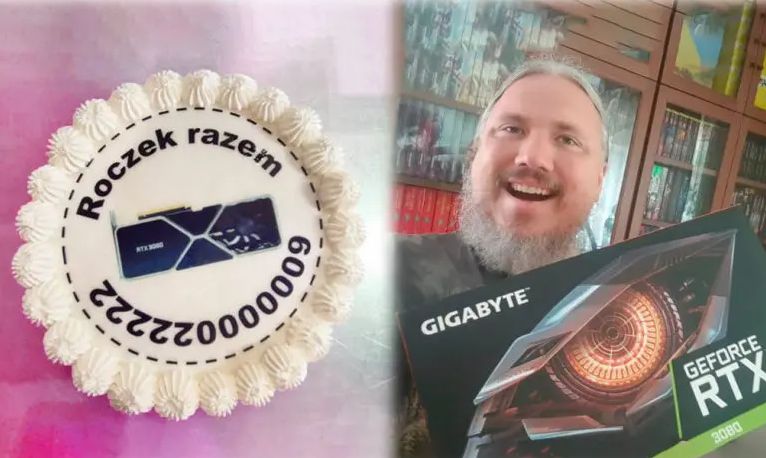 Don’t worry, he was able to receive his order afterward!

A Polish bakery was commissioned to make a cake that has a RTX 3080 FE print with the message, “one year together” in Polish with the pre-order number. The cake was sent to X-kom, a store that sells NVIDIA RTX 30s, as a light-hearted jab by a customer who preordered the graphics card and has been waiting for it for a year.

Maybe next time you just have to send a special cake to the store you preordered from in order to get the item you reserved! 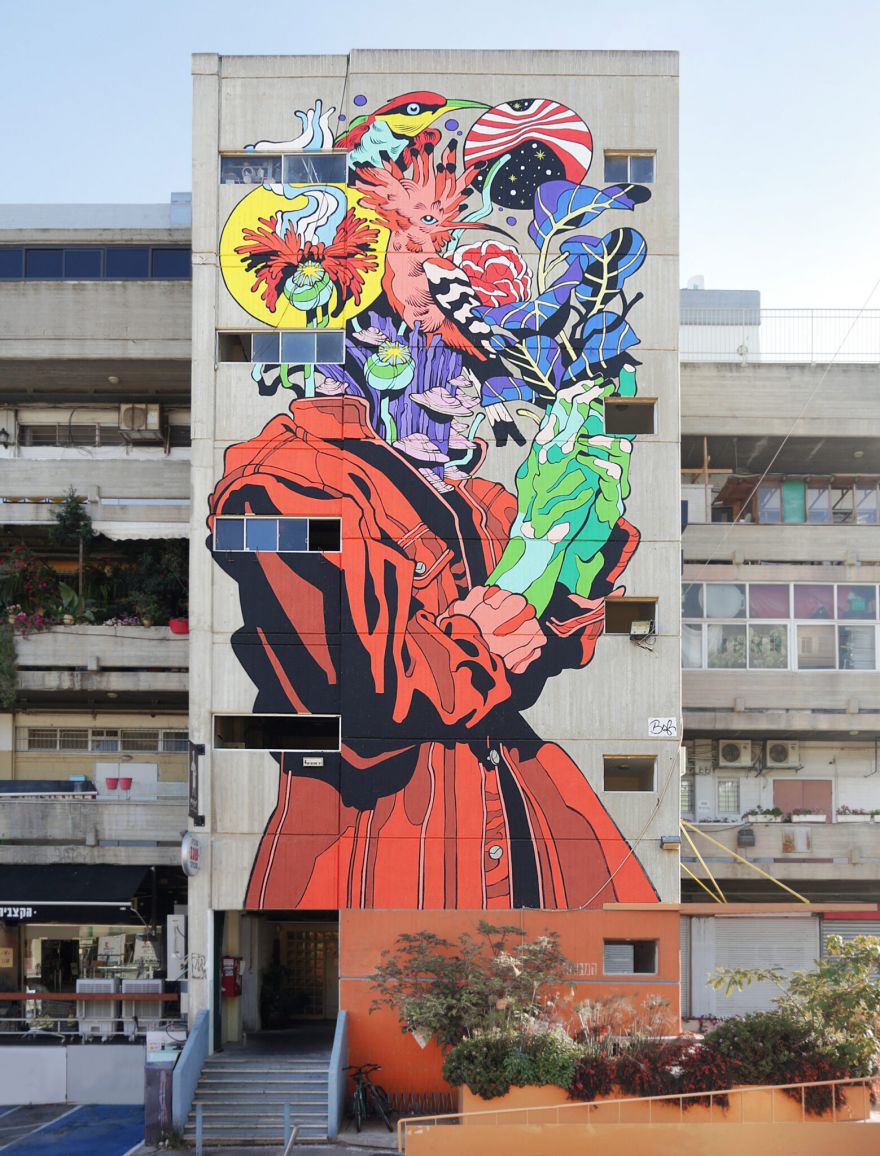 Bicicleta Sem Freio is a duo that paints large-scale murals that feature colorful plants and animals, alongside different cartoon characters. Their artworks can be found all over the globe, from New Delhi to Jerusalem to Fortaleza.

Brazilian artists Douglas de Castro and Renato Reno, the people behind the brand, were influenced by the ‘80s and ‘90s global and Brazilian pop culture. Both artists enjoyed watching cartoons and television shows when they were younger. The artists immerse themselves in a community’s contemporary and historical aspects in order to create a custom mural for the area. Check more photos on their projects on Instagram!

Watching this footage is like taking a relaxing ride over Newark Pond in Vermont. Since I can’t really go outside and explore the different tourist spots around the world, living vicariously through content posted online will have to do. For now.

Photographer John Rowe captured the different trees near the water through his drone, showing the different colors of foliage due to the changing of the season. Check the full video here!

The huppû is a term used to refer to professional acrobats in the Middle East, specifically, in Syria around 4,000 years ago. According to accounting records and letters unveiled from a royal archive, the troupes of huppû usually performed several times per month for special events, such as the arrival of visitors, religious festivals, and the celebrations made when the king safely returned to the city. The productions pulled together by these acrobats included music, dancing, and feats of acrobatic prowess, and they were admired enough to accompany the king during his diplomatic journeys to other kingdoms.

Learn more about the huppû here! 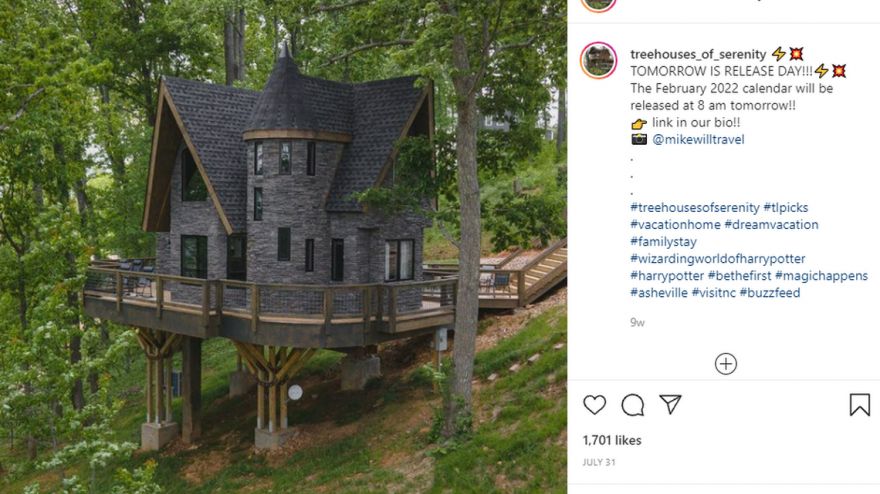 The “Wizards Hollow” is a Harry Potter-inspired treehouse that serves as an Airbnb. Located in the North Carolina Blue Ridge Mountains, the treehouse is close to 600 square feet, and has one bedroom with “a spiral staircase that leads to a loft with an additional bed”.

The treehouse, which resembles a magical castle from the outside, has velvet wall hangings, colorful flags, Hogwarts-style pillows, and other Harry Potter decorations that will completely capture the senses of every fan. Wizards Hollow is unfortunately booked until October 2024, so if you want to get a chance to stay in the Airbnb, you need to wait for quite some time. 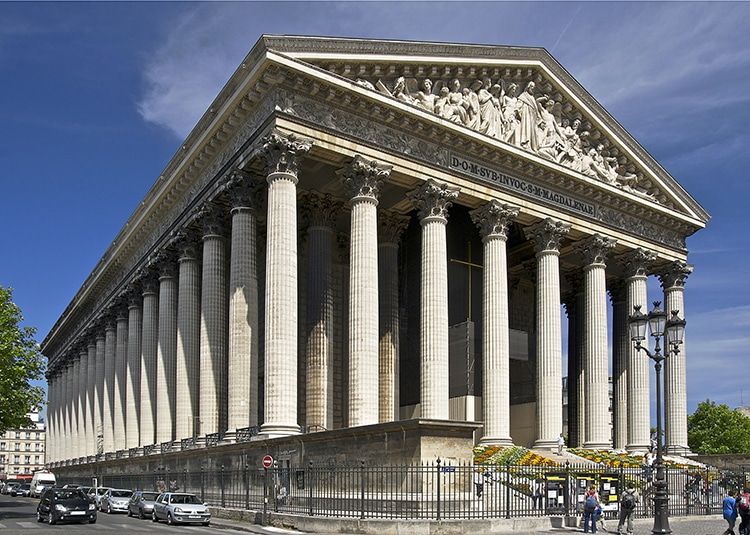 La Madeleine is a landmark of the French capital. The structure, also known as  L'église Sainte-Marie-Madeleine (the Church of Saint Mary Magdalene) is a Neo-Classical masterpiece that was finished during the 19th century after being delayed by the French revolution. The building features majestic sculptures all around, along with magnificent columns. 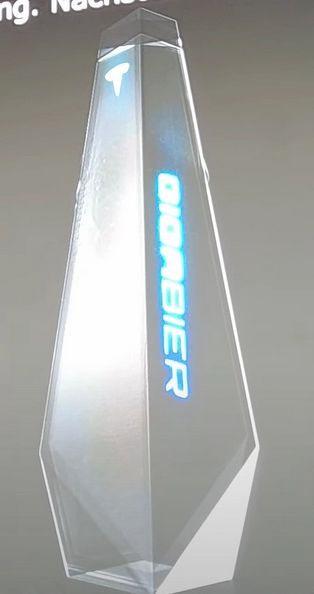 Tesla now has a beer. It also comes in a futuristic-style bottle.

This isn’t a new venture for the company, as it released its own tequila last year. However, this is the first time that Tesla has produced beer. Their beer, called ‘Gigabeer,’ comes with a Cybertruck-inspired bottle. Check electrek’s full coverage on the announcement here!

Space weather is associated with solar flares and solar wind that can affect our planet’s ionosphere. This specific part of our atmosphere is a layer of charged particles, which has an impact on long-distance radio communications, and orbits of some satellites. In addition, the layer can create fluctuations in the electromagnetic field that can wreak havoc with electronics in space and down to the ground.

In order to take precautions against any interruptions from the changing weather in space, the Australian-made space weather satellite CUAVA-1 was deployed into orbit from the International Space Station in order to help experts forecast space weather easier. 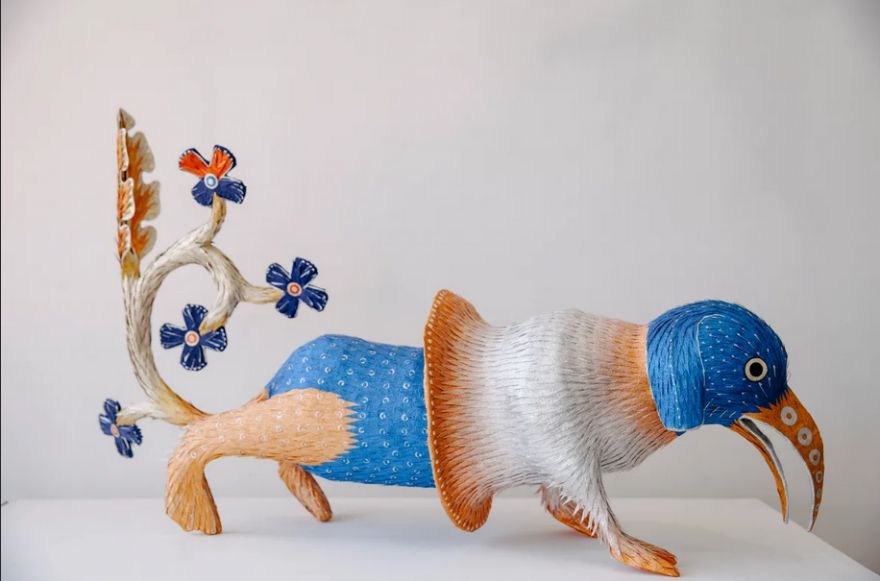 We’re familiar with piñatas-- the bright and colorful sculptures made from paper used in celebrations. However, piñatas can now be used to tackle different world issues today. Take, for example, Giovanni Valderas’ work. The artist uses colorful sad-face piñatas in order to comment on the gentrification and the displacement of Latinx communities.

Hyperallergic dives deep into the craft and politics behind the bright artform. Read their full piece here. 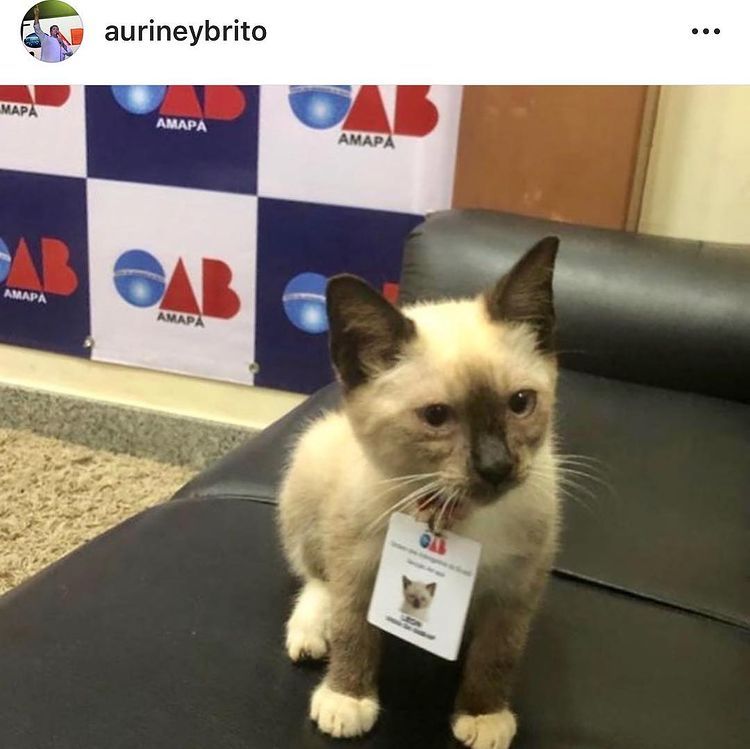 The Order of Attorneys of Brazil (OAB) found a stray cat near their building. Instead of shooing the poor kitten away, they decided to ‘hire’ the animal as a ‘watchcat.’

The people at the Brazilian Bar Association fell in love with the cat and dubbed him Dr Leon, O Advogato. He is now the OAB’s official watchman and is in charge of welcoming newcomers and those who are visiting the office.