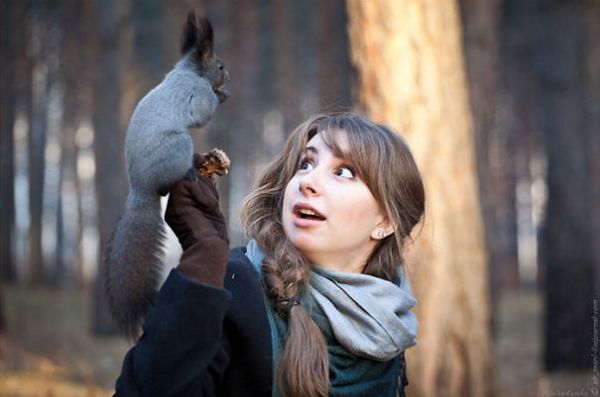 People think you need to be cursed, possess some sort of magical ability or have some evil a-hole who wants you dead to be a Disney princess, but all you really need is a good rapport with animals and a well timed photo to give you that fairy tale hero vibe. 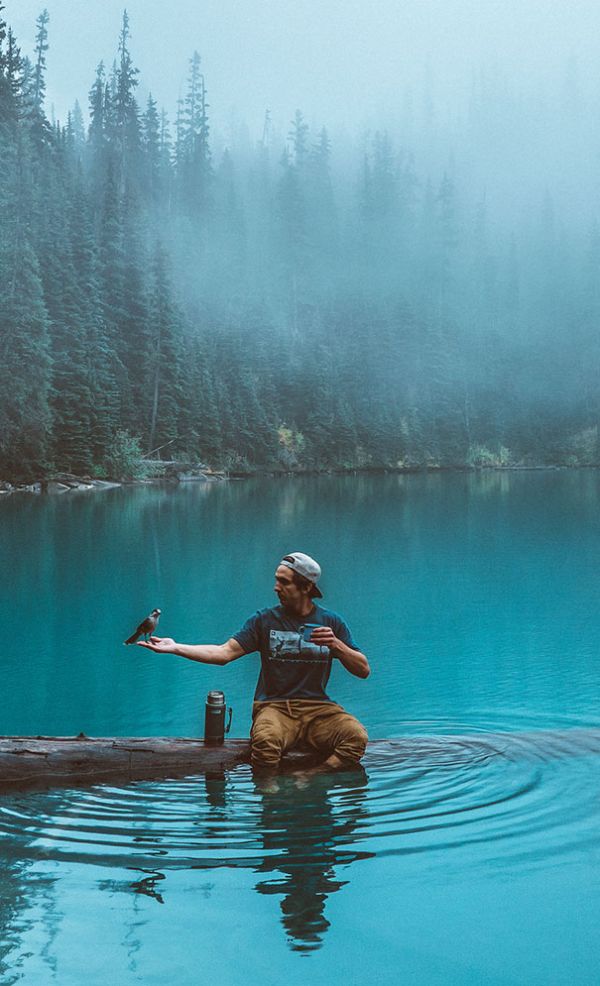 Friendly woodland critters are a big reason why people are mistaken for real life Disney princesses, and since they seem to be getting friendlier by the day the world is becoming one big Disney princess parade. 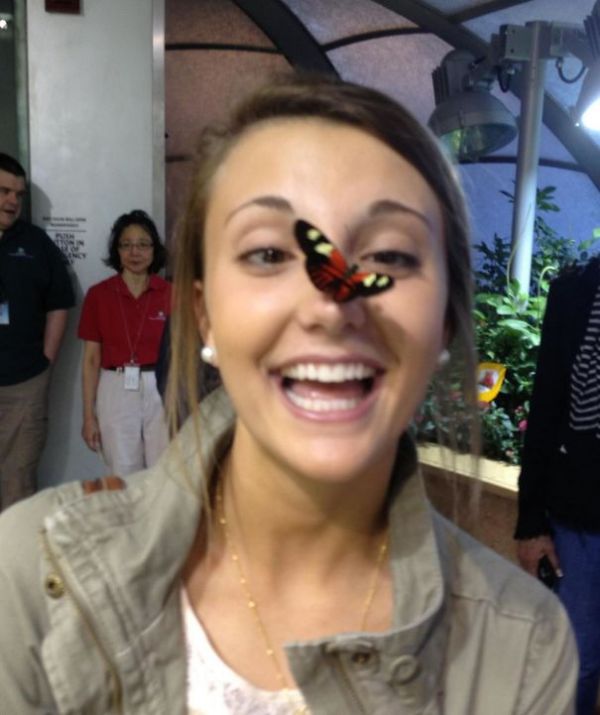 Just look at this kid who seems to have a strange power over parrots- can't you just hear him belting out a princess-style song as his parrot friends help him get dressed for the ball? 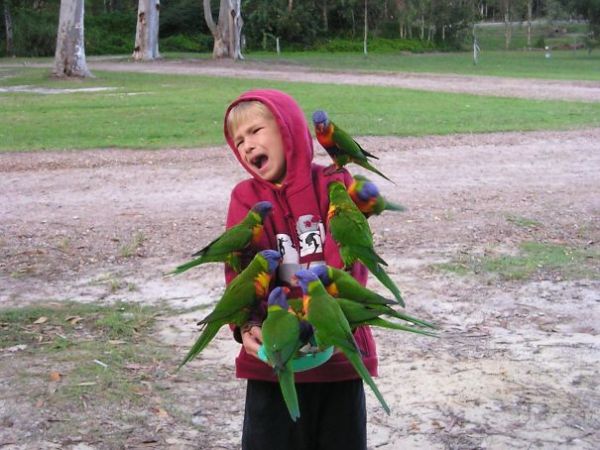 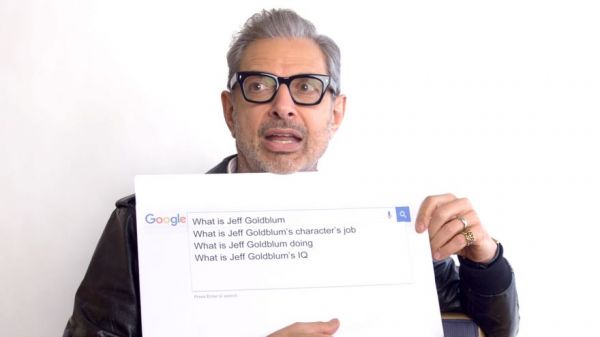 Jeff Goldblum is one of the least afraid actors in Hollywood, and his effortlessly cool demeanor makes me think he must be a descendant of Fonzi and therefore quite magical to hang out with.

But since I'll probably never get to meet the guy, much less hang out with him, I'll have to get to know him by watching this fun Autocomplete Interview video by WIRED instead.

That way I can find out fun facts about Jeff, like the fact that he has two sons and does not in fact have a stutter, and the video also answers one of the most important questions of all time- does Jeff Goldblum song? Why yes, he does song! 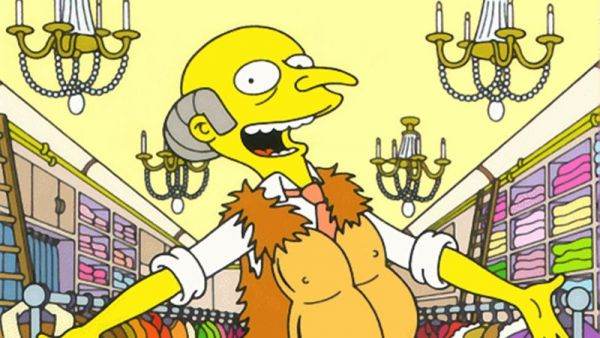 The Simpsons isn't a musical show per se, since not every episode features a musical number, but over the last three decades the show's creators have treated us to some great original songs that really get stuck in your head.

Songs like "Baby on Board", "Who Needs The Kwik-E-Mart?" and "See My Vest" stick with you seemingly for the rest of your life, lying dormant in your brain until you hear a few verses sung or read about them on a list such as this.

And let's face it- as far as earworms go I'd rather have "Baby on Board" bouncing around inside my head than some cheesy modern pop song created using the same algorithms that gave the Bieber-bot sentience.

See the 7 Greatest Songs from 'The Simpsons' here 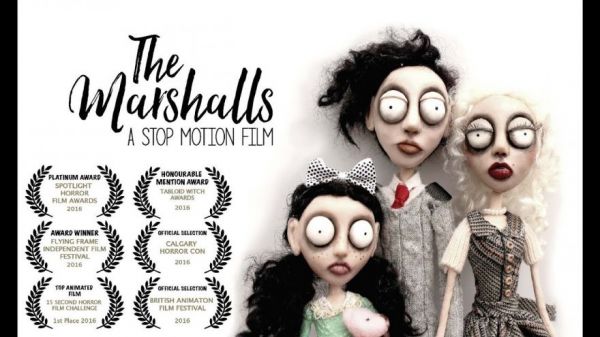 The Marshalls have an ordinary last name but they are far from an ordinary family, but it's not their big bug eyes, unusual fashion sense or lack of conversation that makes them strange- it's the dark secret they have locked away in the basement.

The Marshalls is a stop motion animation short created by Adeena Grubb, with music by Daniel Beja, and what it lacks in depth of story it makes up for with some super creepy vibes! 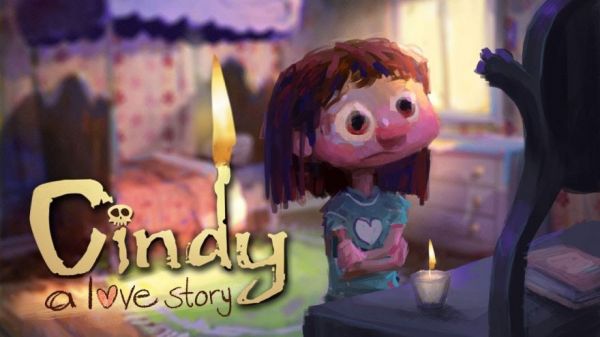 Love is supposed to be a good thing in our lives, a positive force that brings out the best in two people and makes them grow in ways no other force of nature can, but more often than not love just hurts the ones who dare to love.

Some people take the pain in stride, others let it twist them up inside, but Cindy's mom took the pain of love lost and turned it into a curse- which she passed down to her poor little daughter. Can Cindy move past the black cloud her mom cast down upon her head and let the light of love shine down upon her?

CINDY- A Love Story is a twisted animated short with amazing looking art created by Marco Bucci and Bryce Sage, a fairy tale for those who feel like every romantic relationship they ever have is doomed. 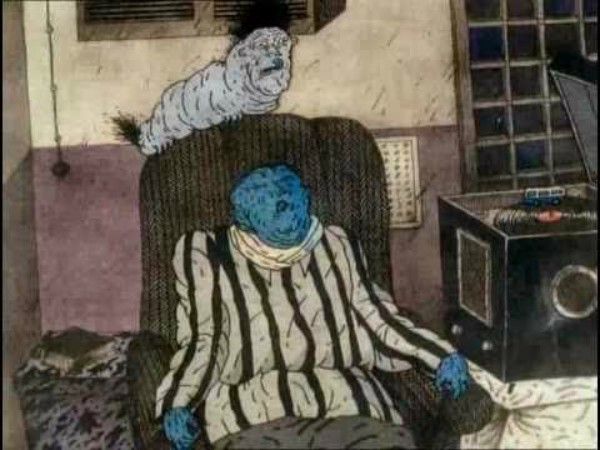 Surreal animated shorts are often too bizarre and too obscure for most viewers to sink their teeth into, but Hen, His Wife is easily accessible to all- even if not everyone understands the symbolist subtexts.

Hen, His Wife is a bizarre short created by Pilot animation studio back in 1989 about a guy who ignores his wife, who is an anthropomorphic chicken, but there's a lot more going on beneath the absurdist surface story:

Igor Kovalyov, one of the studio’s founders, directed a tale so densely symbolic that it's tough to interpret. In terms of narrative, the film is about a family couple in which the husband, dressed in prison-like garments, ignores his dutiful wife – an anthropomorphic hen – until a stranger arrives and jolts them from their absurd coexistence. The plot itself, however, makes little sense without interpreting the abundant symbols of impotence, autoeroticism, and sexuality. Kovalyov’s wordless, surreal drama easily captures one’s attention, leaving a lingering unease in its wake, even without Freudian analysis. 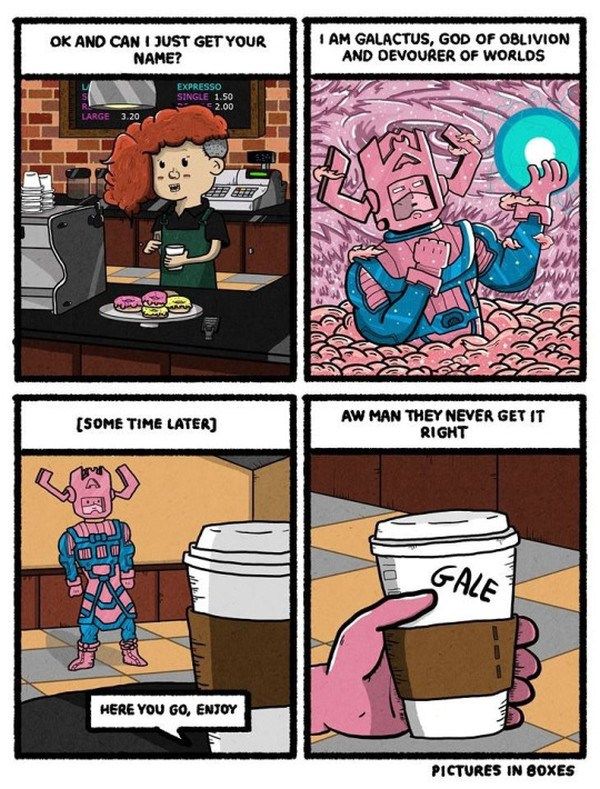 Galactus is a massive dude with an even bigger appetite, and throughout the universe people live in fear of Galactus setting his sights on their planet when he's feeling a bit peckish.

But there's one place where they not only don't know his name they refuse to get it right even if he spells it out for them- his local Starbucks.

There he's often known as Gale, Cactus, Garfield, Garakkus or simply G, and as this Pictures In Boxes comic shows their baristas are the only people in the universe who can make Galactus feel small! 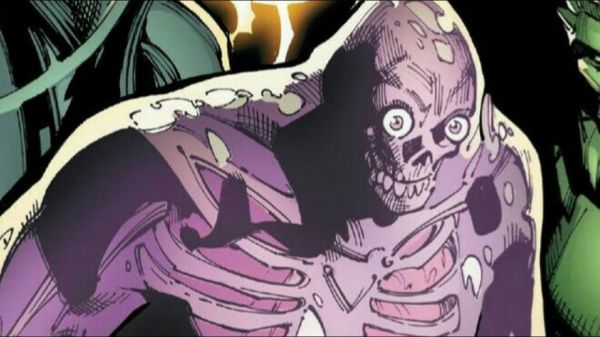 You don't have to be a comic reader to think it would be cool to have superpowers, as humans have dreamt of having the power of flight, indestructibility and super strength long before comic books even existed.

But with so many superheroes populating the pages of comic books some characters are bound to get stuck with some incredibly useless powers.

Glob Herman is a mutant with see-thru skin made of a paraffin-wax-like substance, which makes him useless unless you're looking for a giant living candle who will also scream in pain while he melts away.

Kite Man has the astounding ability to be an "excellent hang-glider pilot", and if that weren't enough his name is Charlie Brown, named after the Peanuts character who had absolutely no luck with kites.

This Looper video counts down some of the most useless superpowers in comic book history, and makes you wonder what the creators were inhaling when they came up with such ridiculous characters. Maybe the fumes given off by a melting Glob Herman? 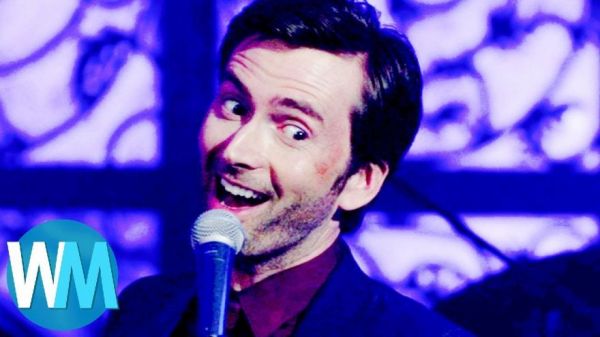 Netflix is killing it when it comes to creating cool original content and backing projects worth backing, and their original series' like Stranger Things, Jessica Jones and Orange Is The New Black became fan favorites as soon as they were released.

These series feature compelling storylines, complex characters and exciting Mature-rated content the networks would never touch, and at the core of each story are heroes and villains who keep fans hungry to see more.

This WatchMojo video focuses on the villains from Netflix's most popular series, featuring my favorite of the bunch at #2- David Tennant as Kilgrave in Jessica Jones.

However, the little thing in this animated short Little Thing presented by DUST made me happy for some strange reason, and it definitely wanted its existence to count even though the world seemed unaware of its existence. Anyway, enjoy this strange little sci-fi show! 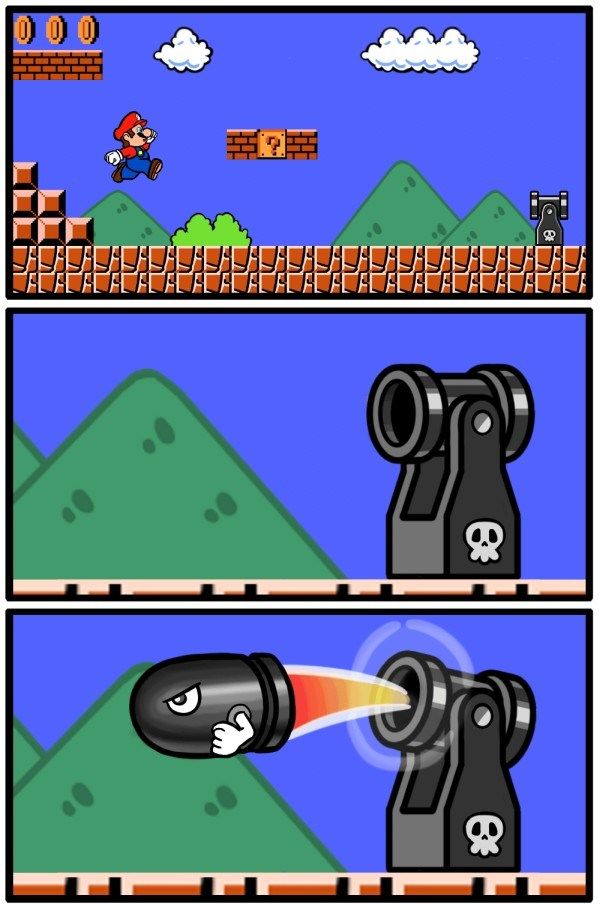 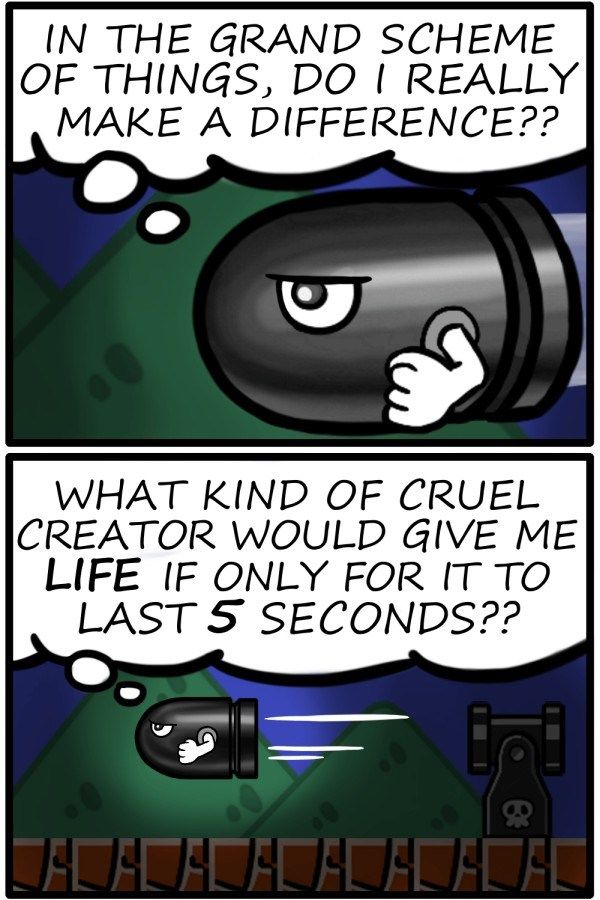 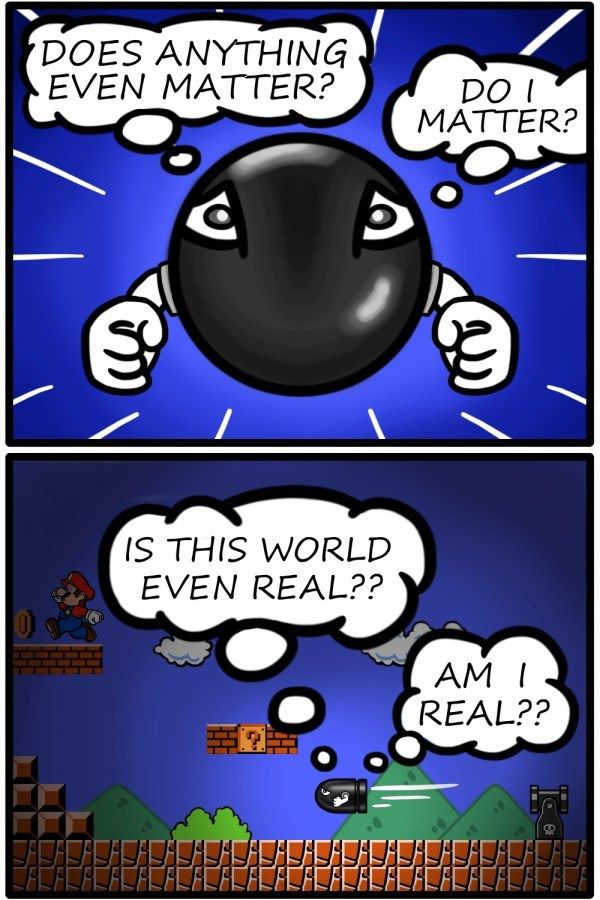 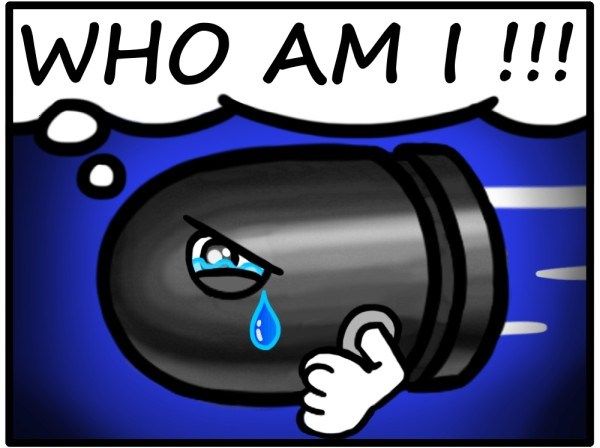 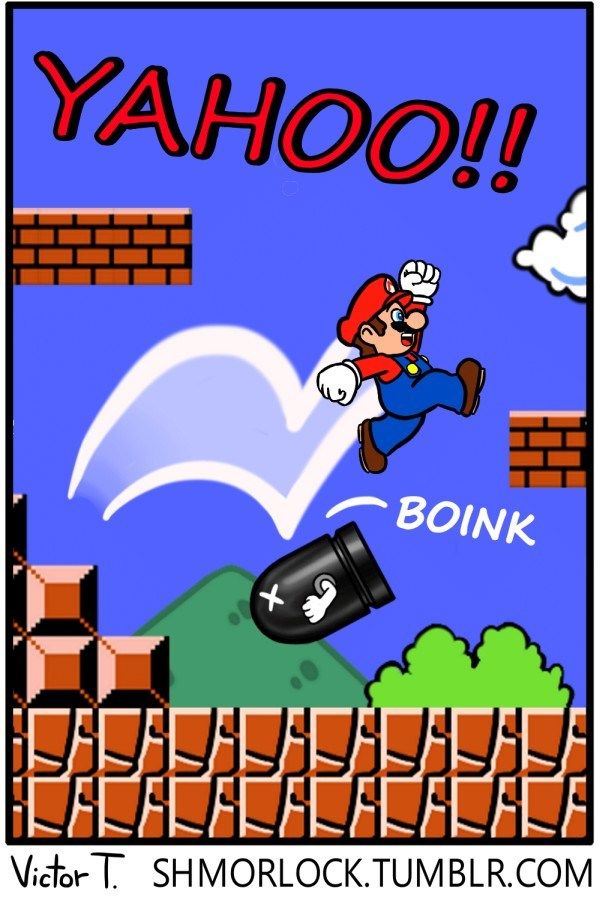 Bullet Bill ain't necessarily a bad bloke, but like all bullets he was made to kill, maim and destroy- so love will remain forever out of reach of his stubbly little arms.

So Bill launches himself into his work, flying back and forth across the level in hopes of making a connection and feeling that certain spark that will lead to explosive revelation.

But, as this Shmorlock Comics strip shows, Bill will never find true love, nor will he ever discover his true reason for being, because he's just an extra in a video game about Mario's life. 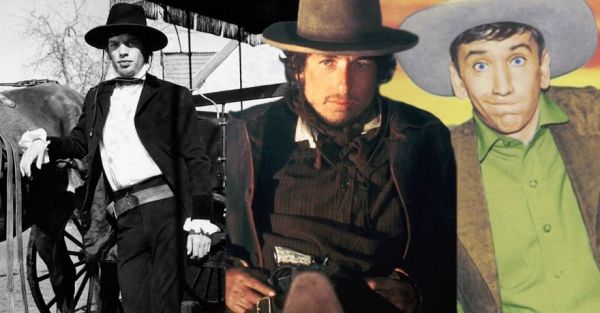 When you think about classic TV and movie cowboys do you think Clint Eastwood, John Wayne and Charles Bronson instead of Bob Dylan, Bob Denver and Sammy Davis Jr.?

Yeah, so does everybody else, but both Bobs and Sammy were in old school westerns too, they're just not as well known for their portrayals of cowpokes as those gritty Western icons.

Sammy Davis Jr. was absolutely great as the gunslinger Tip Corey in the 1962 episode of The Gunslinger entitled Two Ounces Of Tin, playing a character with personality, depth and true grit. 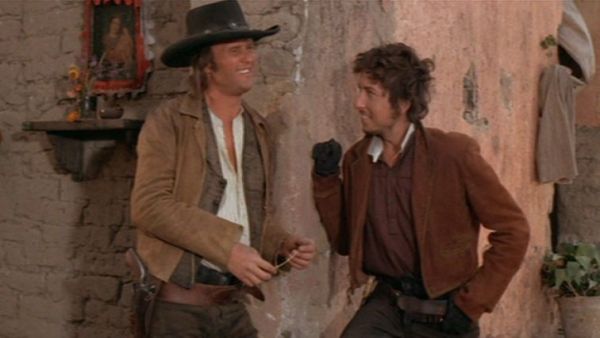 Bob Dylan made in appearance in the 1973 film Pat Garrett & Billy The Kid as Alias, a badass stranger who helps Billy escape from three thugs. Dylan also composed the score for the film, which earned him a Grammy nomination. 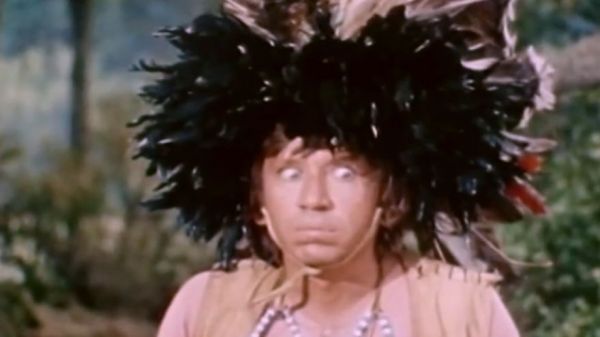 But of the three, Bob Denver got to play cowboy the longest, since he starred alongside Forrest Tucker in the Sherwood and Elroy Schwartz series Dusty's Trail for 26 episodes back in 1973-74.

See The Unlikely Dozen: 12 Stars You Forgot Were Cast As Cowboys In TV And Movies here

Story is the main focus of all RPGs, and the characters who star in the story make each RPG different and interesting in their own way, but for some reason video game designers use the same old bosses over and over again.

They still feel the need to include a Pathetically Early Boss who's somehow supposed to help us defeat the next boss who is often a Weirdly Hard Boss That You Aren't Prepared For, so you get spanked and feel low.

Later you end up facing a Filler Repeat Boss who looks strangely like the Weirdly Hard Boss, so your confidence is boosted before you dare to tackle the Unbelievably Hard Optional Boss, who usually sends me looking for a new game to play...looks like it's time for an RPG revolution! (Comic by Andy Kluthe and Tristan Cooper) 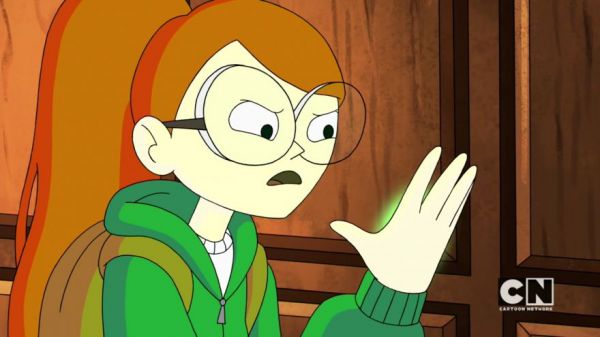 If you met the King of all Corgis would you do his bidding?

Of course you would, because he'd use his royal cuteness to convince you to become his loyal servant, and when you find out your mission is to save the dogs of Corgiana you'd be raring to go!

Infinity Train is a mysterious and captivating animated short that will soon be turned into a series on Cartoon Network, so get in on the mystery before the show debuts in 2019!