While many people were heading the their family's house for Easter or Passover last weekend, plenty of nerds, including myself, skipped the holidays and instead celebrated pop culture at WonderCon, the smaller cousin of the San Diego ComicCon. While there was plenty to see and do at the convention, as usual, one of the highlights was the cosplay. Here are some of the highlights from this year's event. 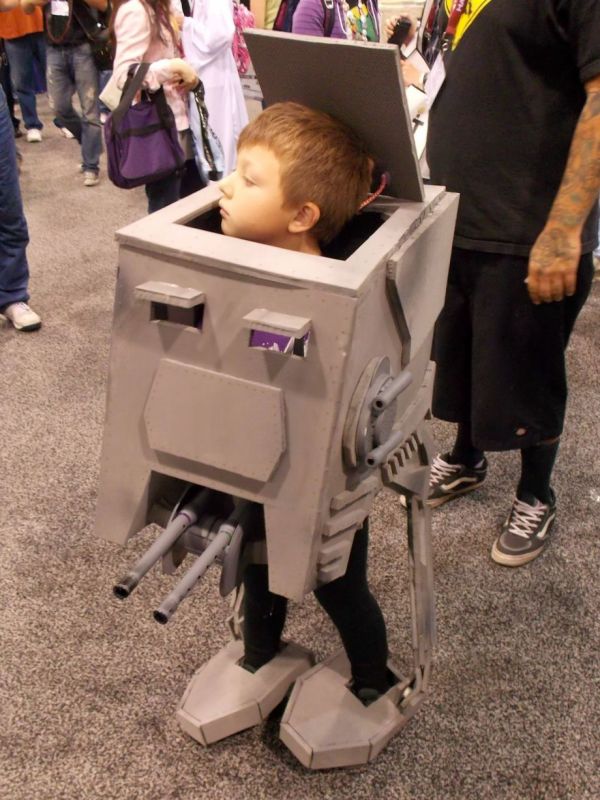 As the convention was right next door to Disneyland, there was an even bigger proportion of kids compared to the average convention, which also meant even more adorable kids cosplaying. This little one was an AT-ST complete with a built-in sound effect from the film that played every time he took a step. 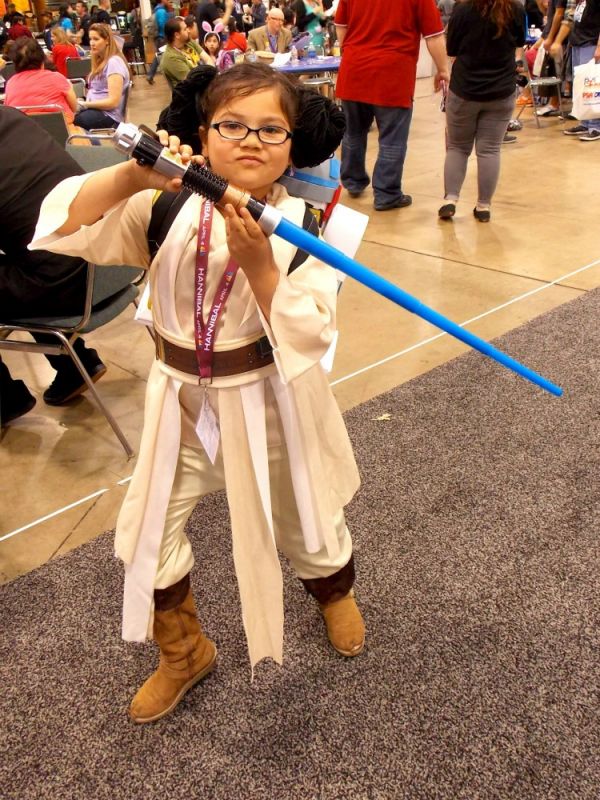 This youngster made quite an impressive Princess Leia, complete with a plush R2-D2 backpack and yarn braids. 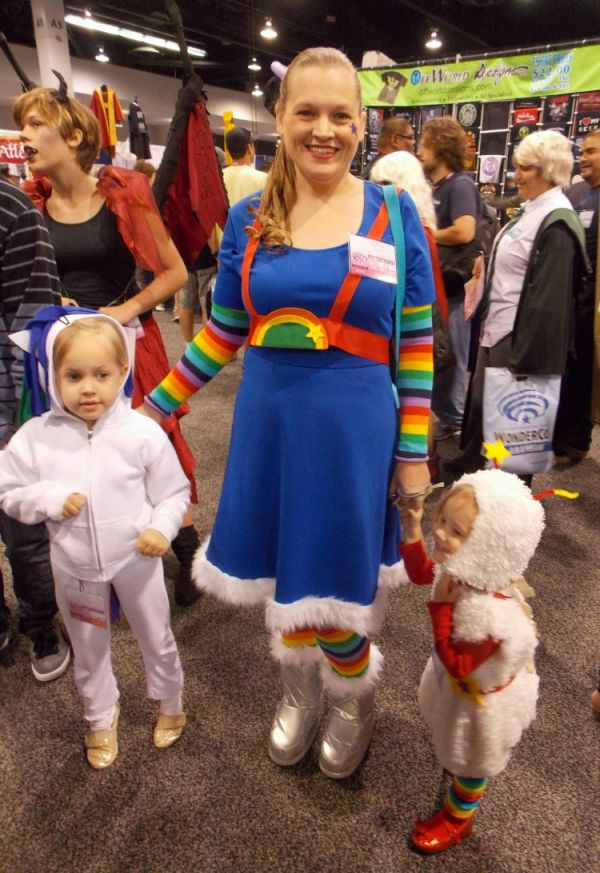 Rainbow Brite was quite cute, but it was her friends Twink and Starlite that really took center stage. Twink was especially adorable as she was just so darn proud of those sparkly shoes. 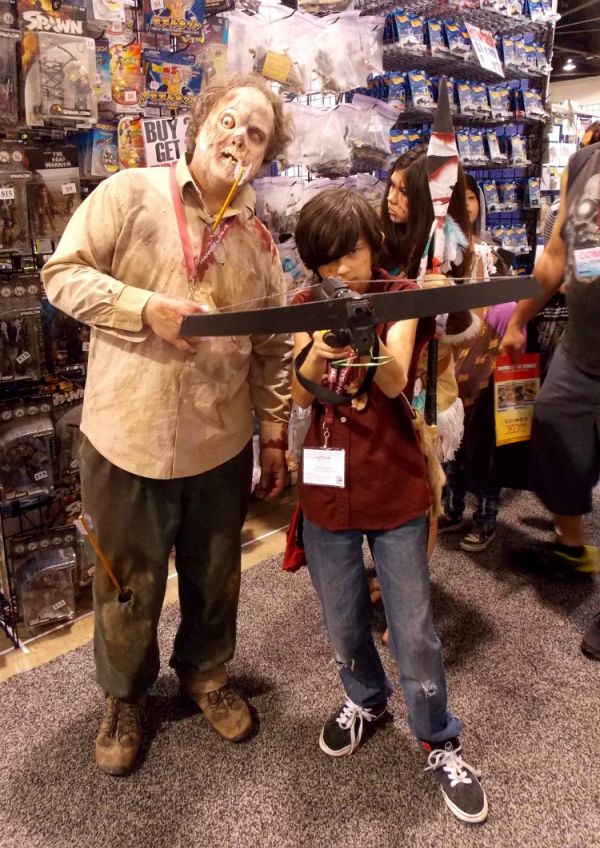 Tiny Daryl was there, ready to take care of any roving zombies, including those in his own family. 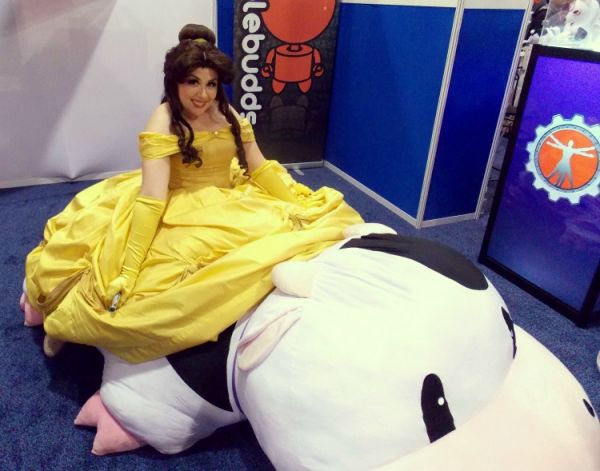 Just like there are more kids than usual because Disneyland is next door, there are also more Disney character cosplays. This Belle was particularly adorable because she was so excited about everything going on at the event -especially her sonic screwdriver and the giant cow at one of the booths. 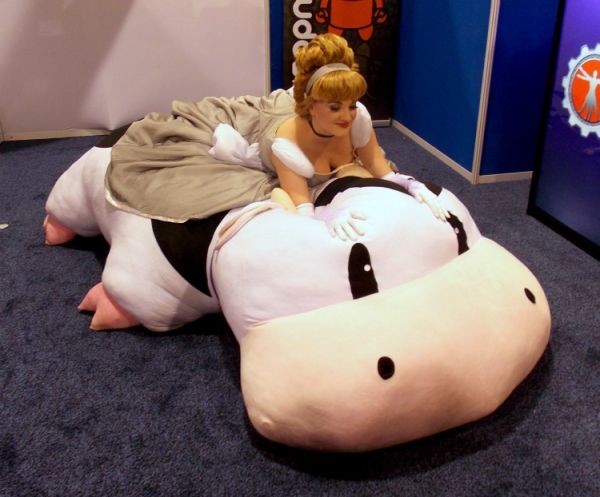 Cinderella was much more reserved than Belle, but she still seemed to be having a great time and she too enjoyed the giant cow plush. 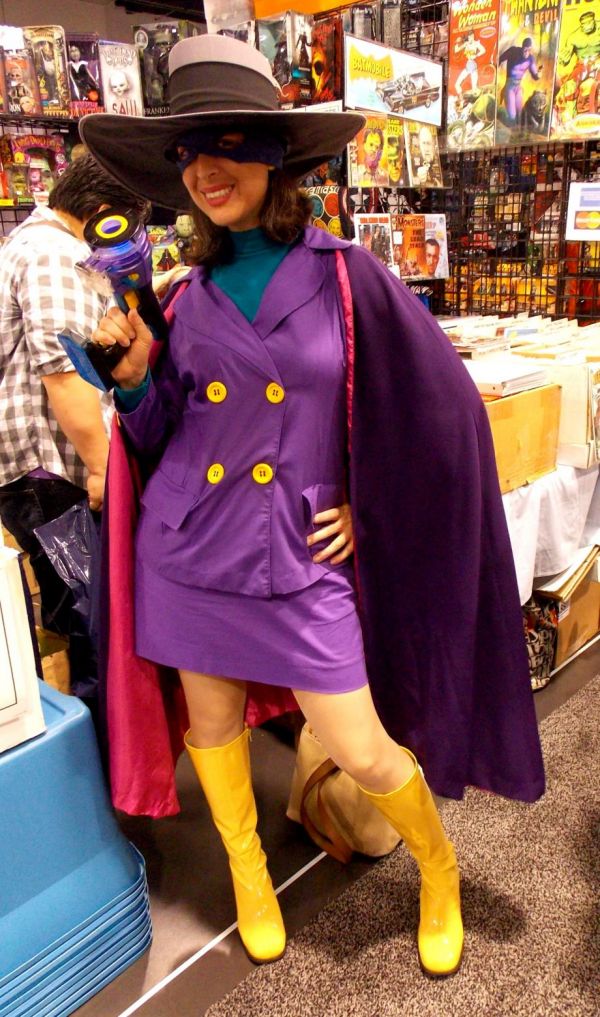 Darkwing Duck was ready to stop any evil-doers in their tracks, and with great style as well. 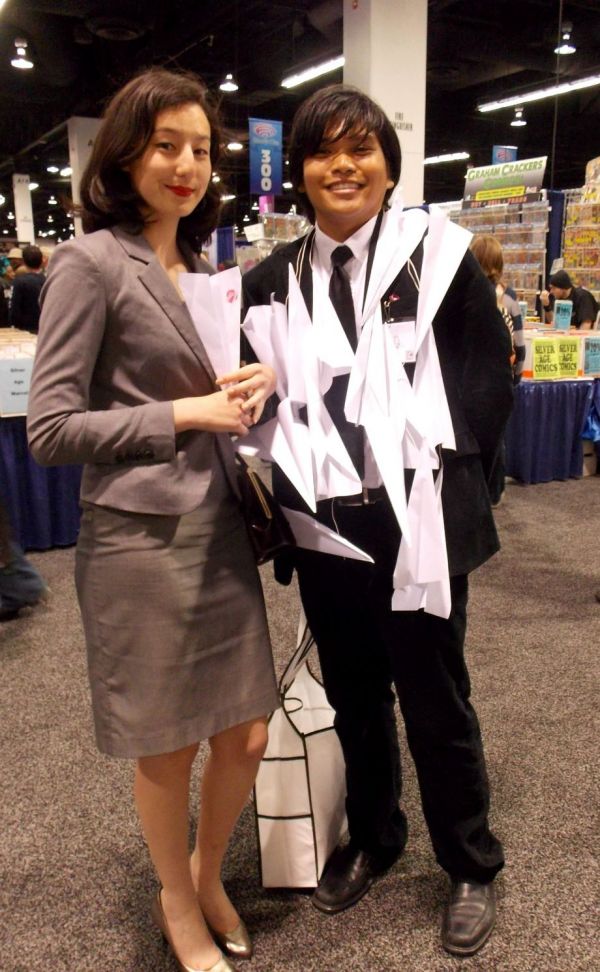 There were even new Disney characters in the mix, including the characters from their new Paperman film. 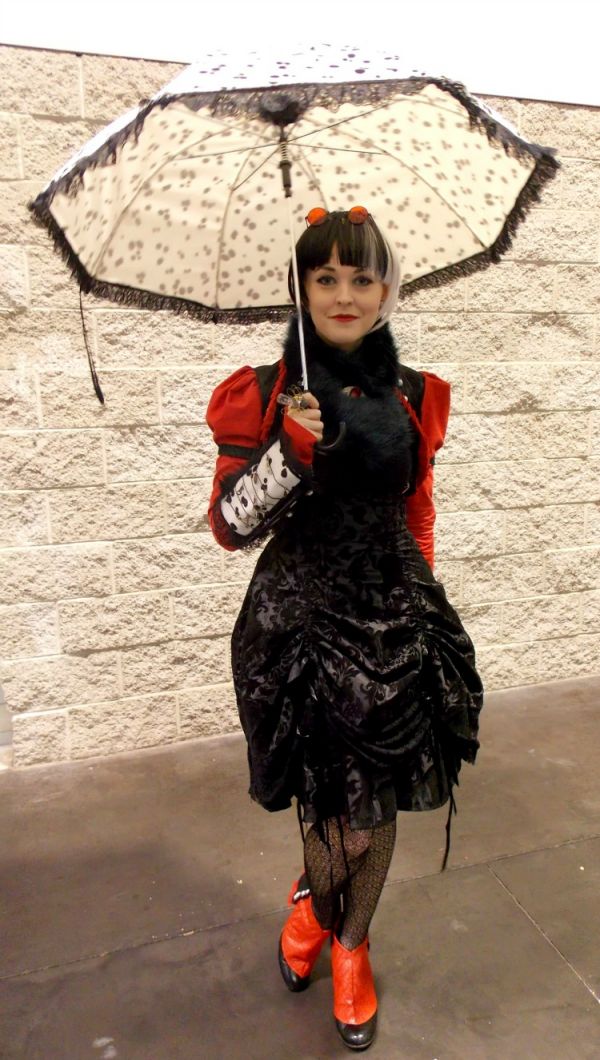 Not all of the Disney cosplay is so traditional. This Cruella de Vil was a delightfully fresh take on the classic villain. 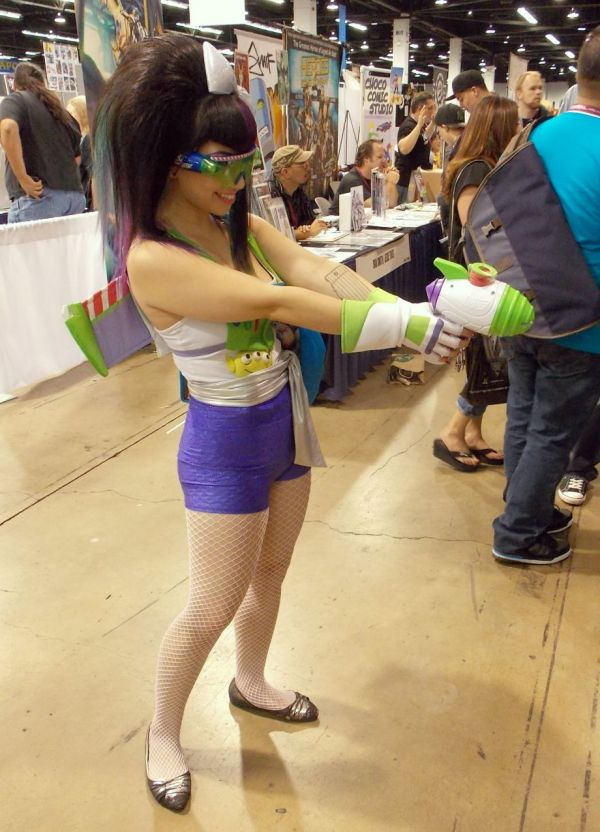 This Buzz Lightyear costume took a lot less material than the original and was certainly a lot more comfortable and funky. 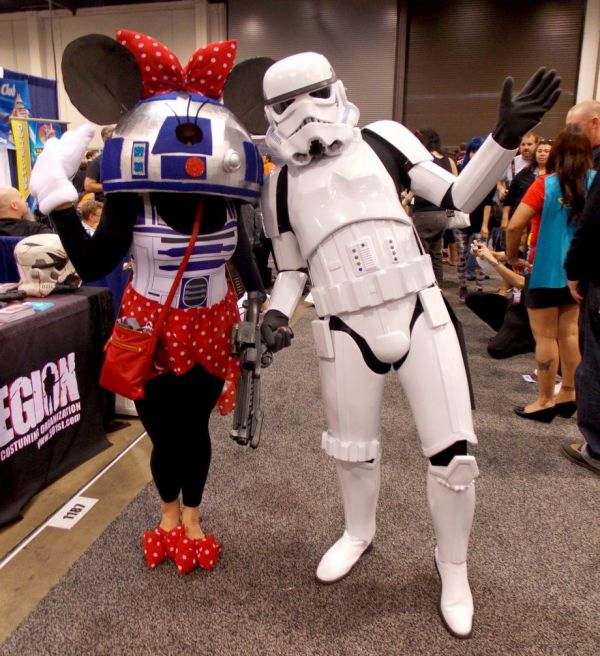 There are always tons of Star Wars costumes at conventions, but in this setting, it was only fitting for R2 to take on a little more of the Disney spirit. 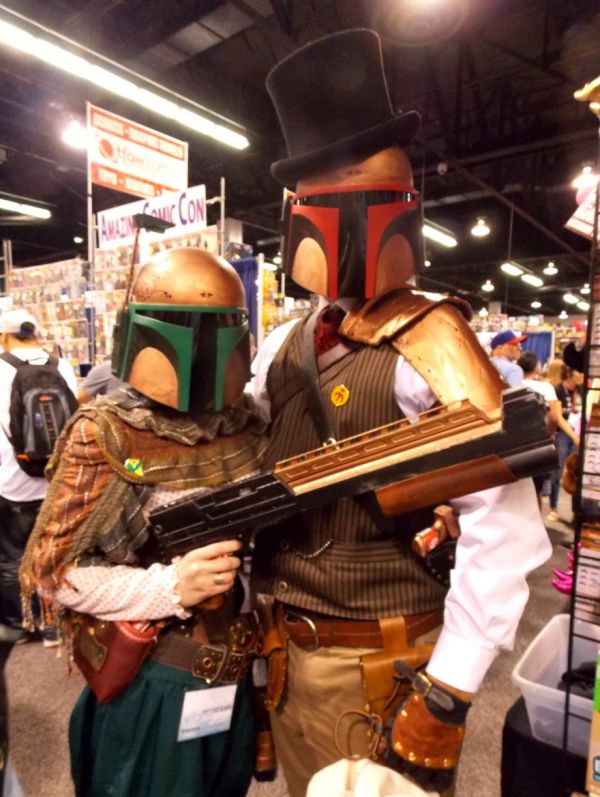 Naturally, there were plenty of other Star Wars mash up costumes as well. Including this rather nice set of steampunk Boba Fetts. 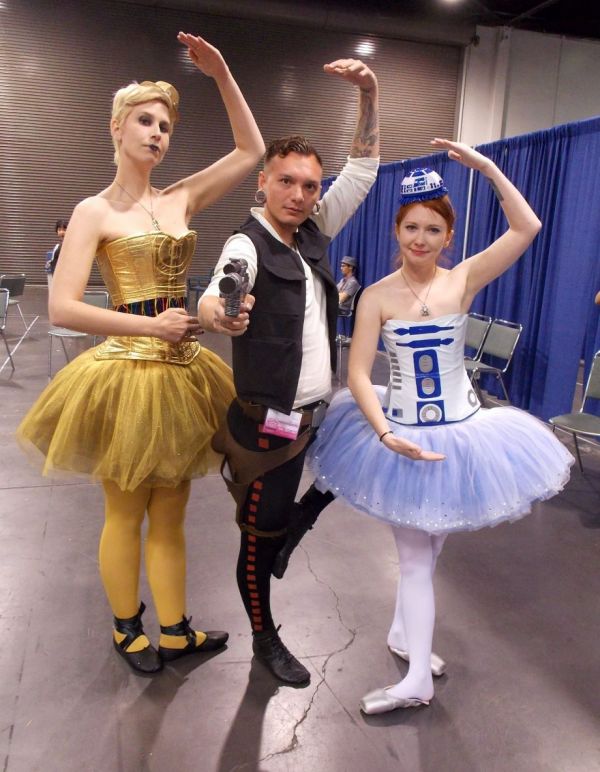 The famous R2-D2 Ballerina was also there, along with fellow dancers Han and C-3PO. Cosplayers include Oracle Applesniffer and Samantha and Johnny of Double Monocle Cosplay. 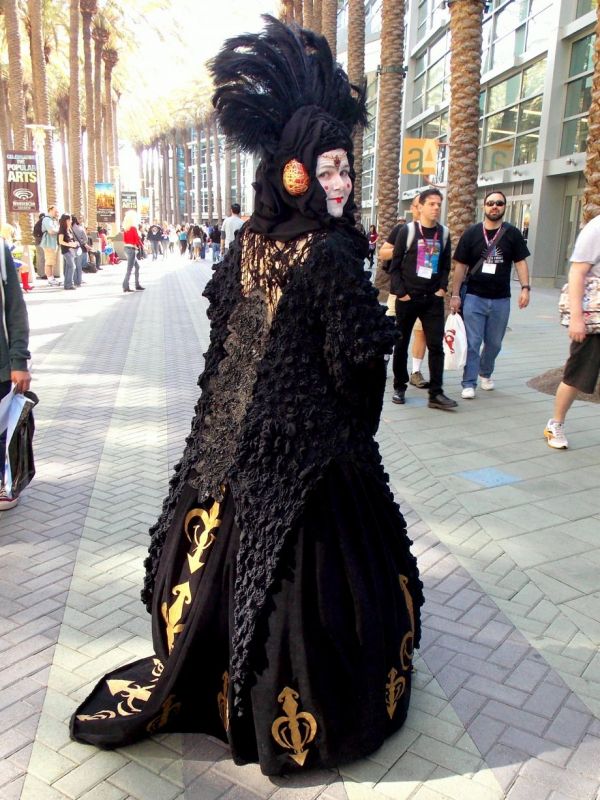 While there were plenty of fantastic costumes there, this beautiful Queen Amidala dress might have been one of the most elaborate outfits at the convention. 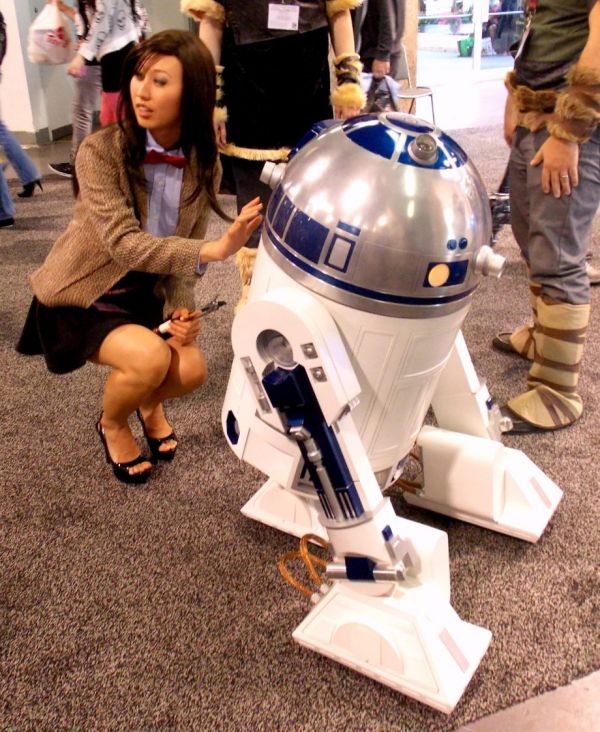 Enjoy a little cross-series fun? Then you would have loved seeing the female version of The Doctor playing with R2-D2. 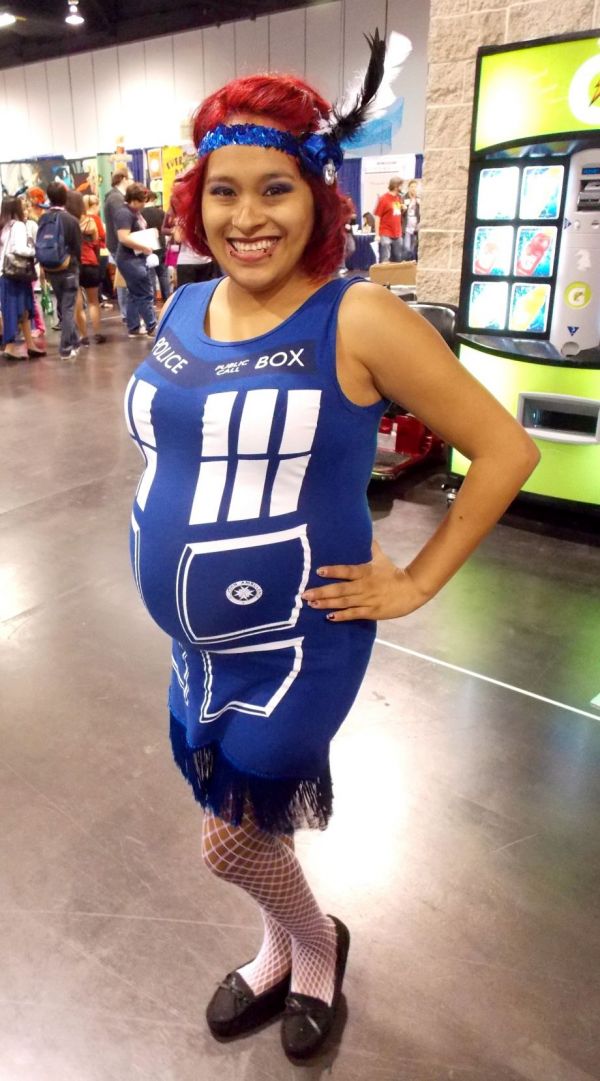 You see all kinds of TARDIS dresses these days, but this was certainly the first flapper TARDIS I've seen and also the first pregnant TARDIS as well. 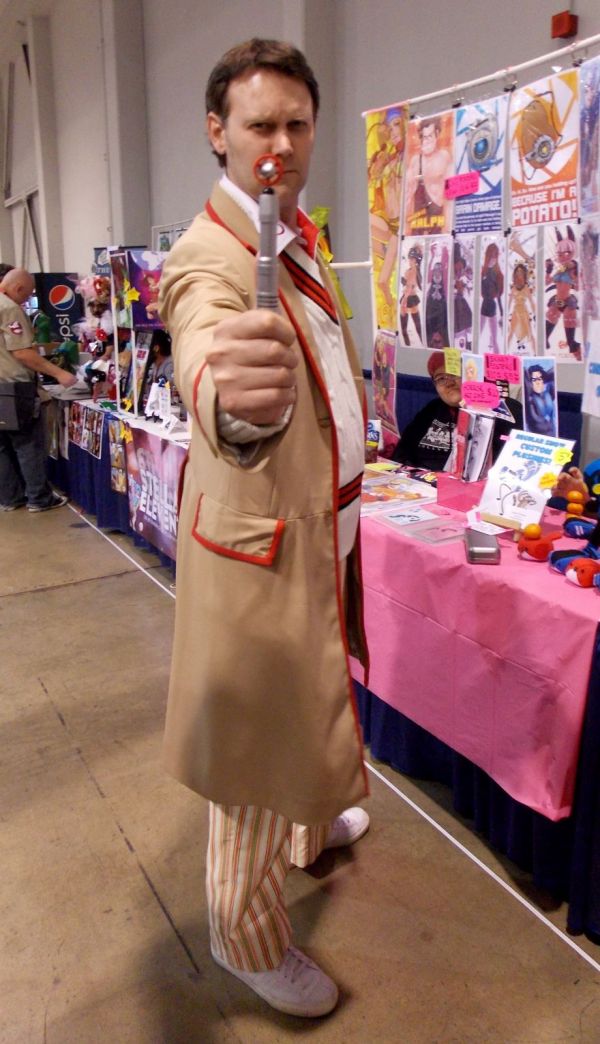 Speaking of rare Doctor Who costumes, you see plenty of Tens, Elevens and Fours, but seeing someone go as Number Five was a refreshing change. 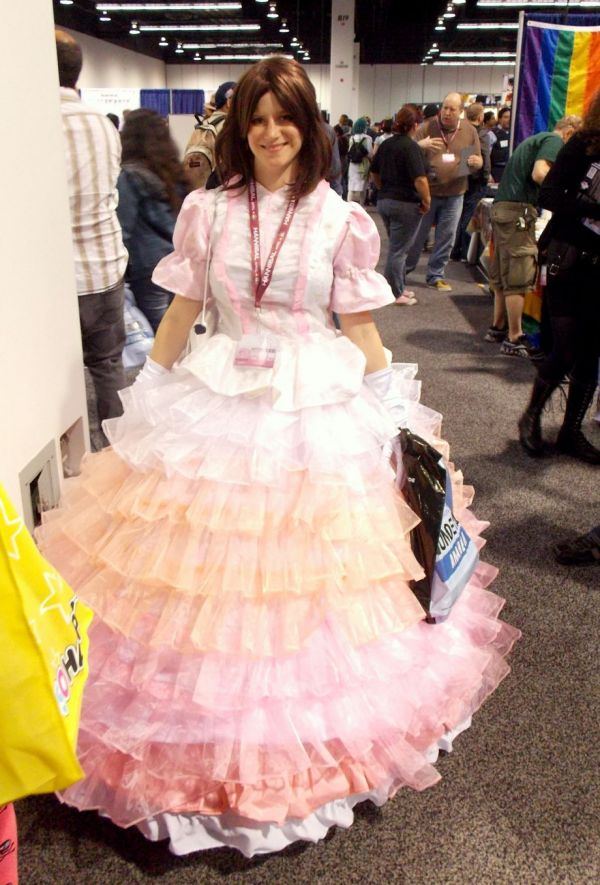 I've always wanted to wear the poofy dress Kaylee wore to the fancy ball and I can't say how thrilled I was to actually see someone else wearing this great dress. 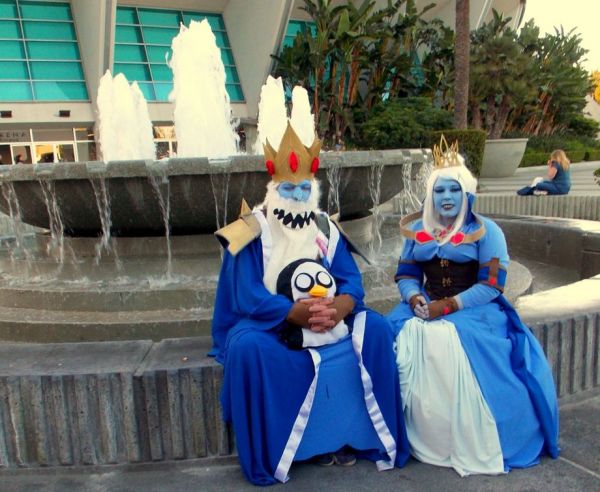 This year, Adventure Time was really popular amongst cosplayers, especially the Ice King. Here are two of them hanging out with Gunter outside of the convention. 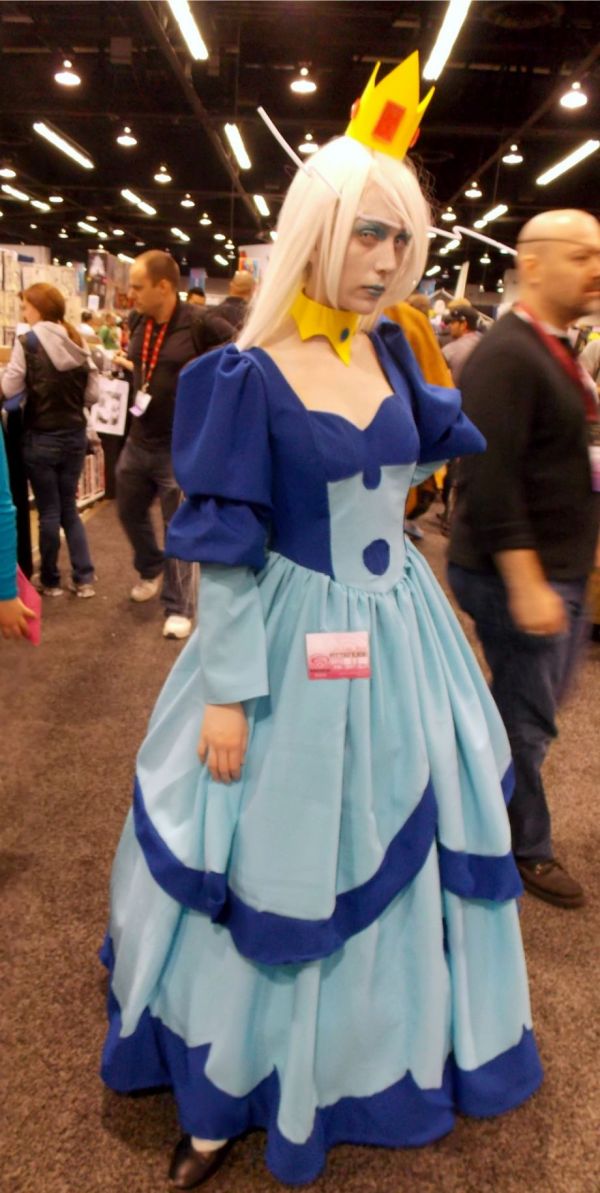 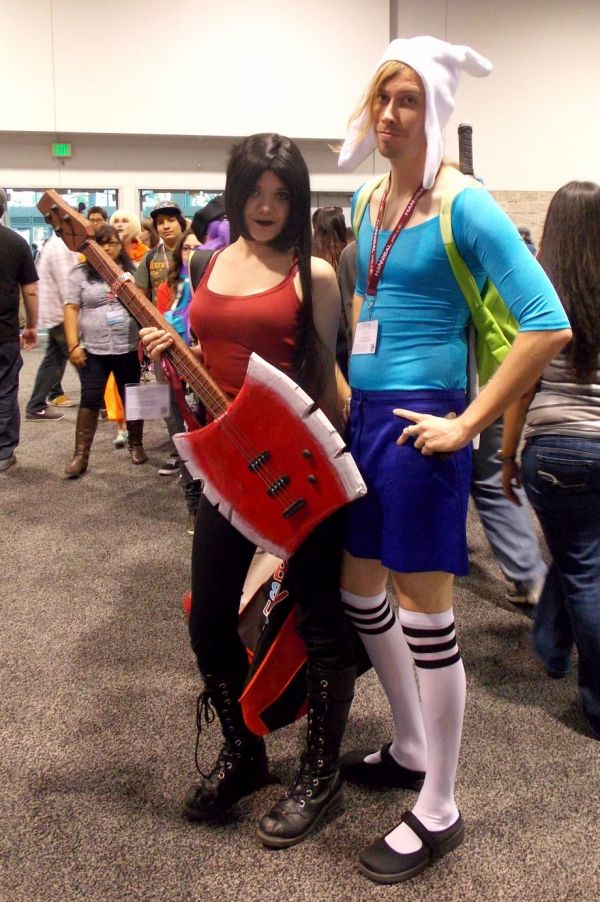 Not all the Adventure Time costumes were the Ice King...here is Marceline with a gender swapped Fionna. 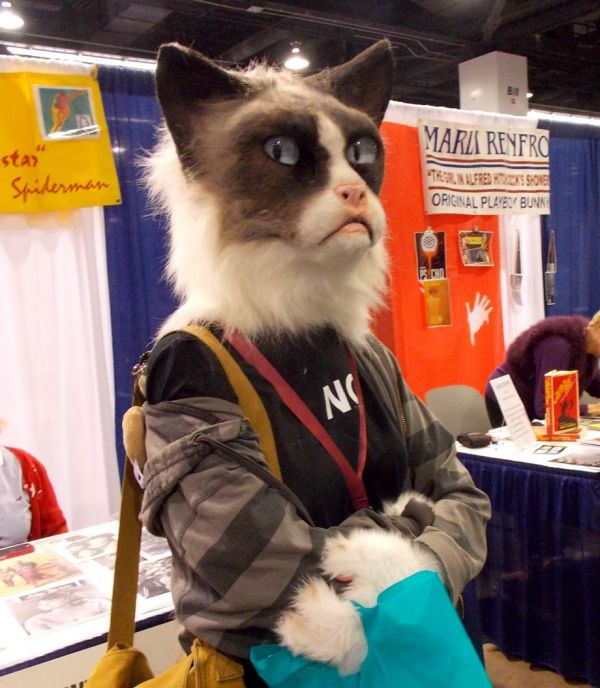 This Grumpy Cat was the only meme-related costume I saw, but even if there were others, this would still be the best. 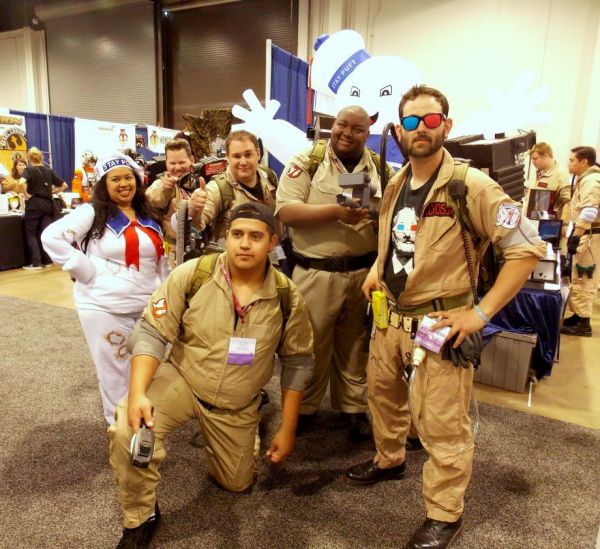 There were tons of Ghostbusters and a few Stay Pufts, best of all, they were all hanging out together at one point. 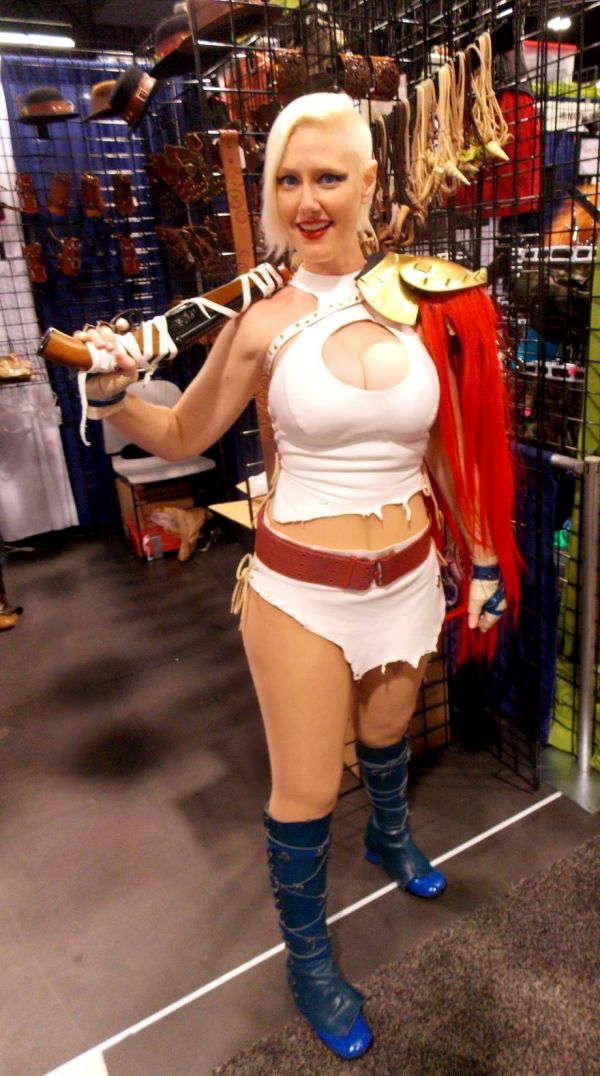 Like most conventions, there were plenty of comic book costumes, including this great Power Girl warrior costume. 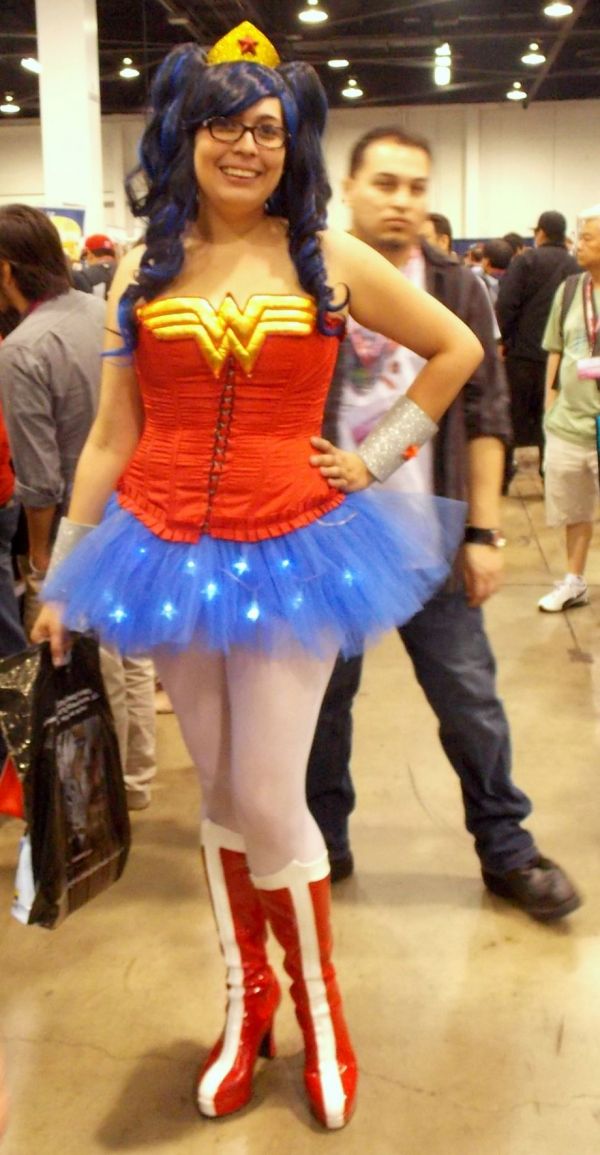 There was also this great Wonder Woman ballerina, although I can't imagine her dancing well with those boots. 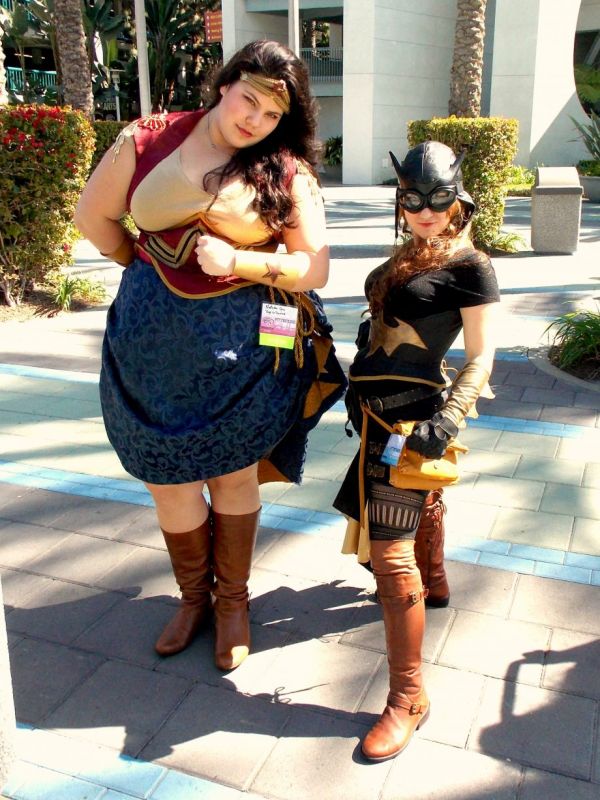 These two had a unique take on Wonder Woman and Cat Woman as well. 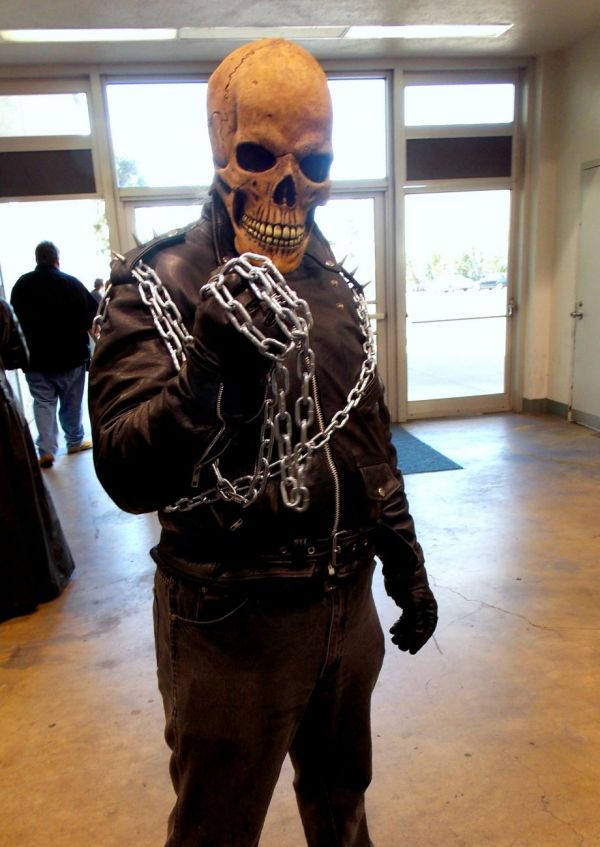 While Ghost Rider went in a more standard costume style, the result was still impressive.

Overall, the convention was a blast and the costumes were certainly up to par and impressive, even if the event is relatively small compared to many others out there. For more great photos, check out my post over at Rue The Day.