The following is an article from the book Uncle John's Bathroom Reader Salutes the Armed Forces. 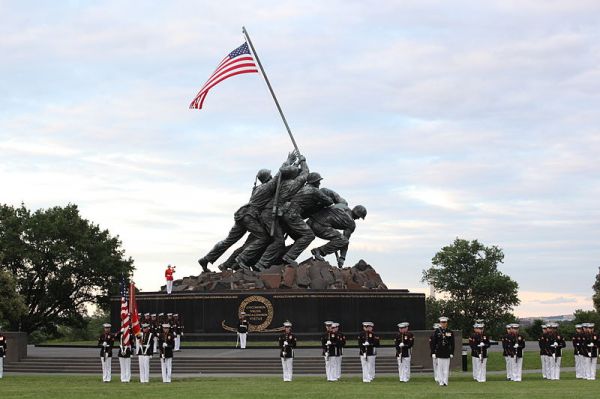 By February 1945, U.S. troops had recovered most of the territory taken by the Japanese in 1941-42 except for the small island of Iwo Jima, 660 miles from Tokyo. Recapturing Iwo Jima would bring America's Pacific campaign to a successful conclusion. 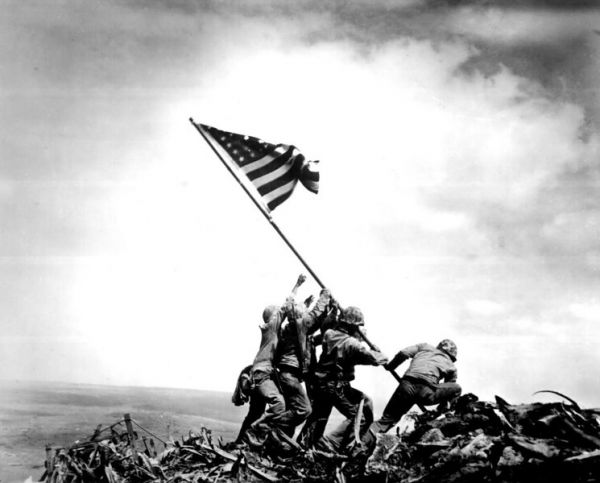 The Marines landed on Iwo Jima on February 19 and made their way toward Mount Suribachi, the island's highest point. They reached and surrounded their destination on the 21st, but it took them until the afternoon of the 23rd to capture the summit. When five Marines and a Navy corpsman raised the American flag at the summit of Mount Suribachi, Joe Rosenthal was lucky and quick-witted enough to capture an iconic image. Rosenthal's photograph was splashed onto the front pages of newspapers everywhere. By the end of March 1945, Time magazine had called it "the most widely printed photograph of World War II," it was the centerpiece of the seventh war bond drive, and had earned Rosenthal a Pulitzer Prize.

BRINGING A PICTURE TO LIFE

The Iwo Jima monument was the brainchild of Felix de Weldon, an Austrian immigrant who came to America in 1937. An internationally known sculptor and artist, Weldon had joined the Navy and had been assigned to the Construction Corps. Like most Americans, he was enthralled by Rosenthal's photograph, and submitted a small wax model of the photograph to his superiors. The Navy Department immediately ordered him to make a life-size plaster cast. The first likeness was presented to Harry S. Truman on the 170th birthday of the Marine Corps, November 10, 1945; its duplicate was sent on a national tour as part of the Victory Bond drive. 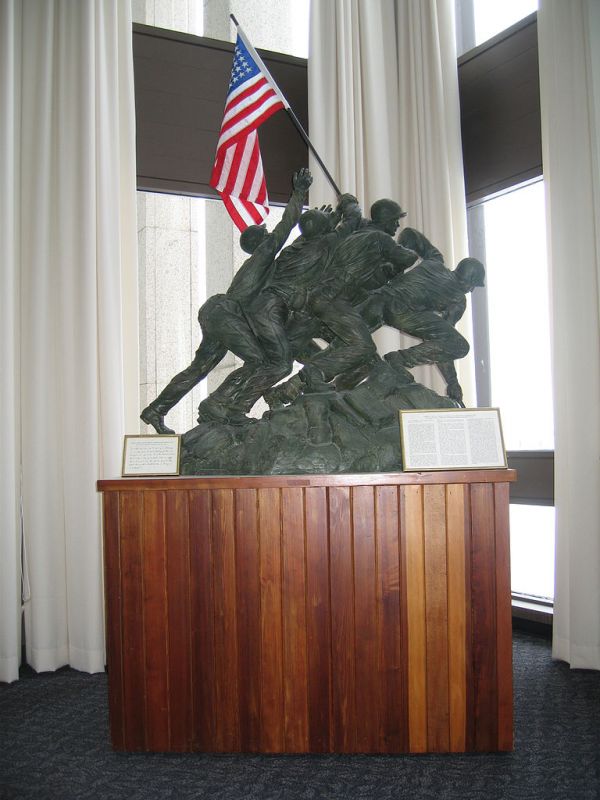 Weldon was hired to build a bronze casting of Rosenthal's photograph at four times life size. With Marines now fighting in the snow and bitter cold of Korea, Marine commandant General Clifton Cates made the ceremonial first donation, then appealed to his fellow Marines for contributions to build their monument. 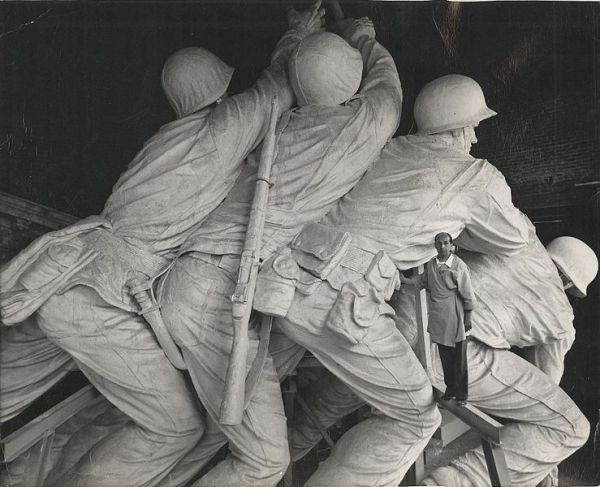 Weldon's plan was to cast the entire monument in plaster, cut it into sections, cast it in bronze, and then reassemble the monument on-site. The estimated cost was $350,000. First he cast the heads, which were five feet tall from the neck to the tops of their helmets. He sculpted the likenesses of the three surviving flag raisers in clay prior to casting them in plaster. The survivors were Private First Class Ira Hayes, Private First Class Rene Gagnon, and U.S. Navy Pharmacist's Mate Second Class John Bradley. Sergeant Michael Strank, Corporal Harlon Block, and Private First Class Franklin Sousley all died on Iwo Jima -killed in later phases of the battle within days after the Mount Suribachi flag raising. In order to model their faces accurately, Weldon used physical statistics and photographs of the three Marines who gave their lives.

Next, he modeled the six bodies in the nude so that he could realistically depict their straining muscles as they lifted the flagpole. He studied combat fatigues under a microscope in order to capture any details and re-create the effects of wind and combat wear. Weldon used exacting methods to cast their equipment and weapons in order to ensure that his depiction was completely accurate.

When the full-size plaster monument was finished, Weldon cut it into 108 parts, which he shipped to a New York foundry that created huge molds from the plaster pieces. Molten bronze was poured into the molds to make the castings, which took nearly three years, after which a dozen pieces -the largest weighing 20 tons- were shipped to Washington for assembly.

As the statue was being cast, the Arlington site was being prepared. The base was poured and the Marine Corps placed a time capsule inside with two vials of Iwo Jima's coarse sand, the Rosenthal photograph, the "Marine's Hymn," and other memorabilia.

General Lemuel Shepherd, then the commandant, approved a list of battles to be carved into the polished Swedish granite used to face the concrete base. Every substantial battle in which the Marine Corps has fought in has been engraved in four-inch gold letters around the base, which also bears the inscriptions "In honor and in memory of the men of the United States Marine Corps who have given their lives to their country since November 10, 1775," and "Uncommon valor was a common virtue," Admiral Chester W. Nimitz's tribute to the Iwo Jima soldiers. 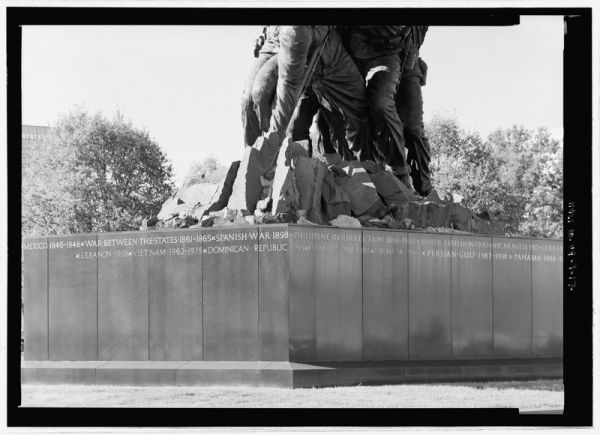 The completed memorial stands 78 feet high, and the bronze statue weighs 200,000 pounds. The final cost of $850,000 was paid entirely by donations. By order of a 1961 presidential proclamation, a flag flies 24 hours a day from a 60-foot bronze flagpole that the 32-foot high figures are shown erecting. The actual flag from Mount Suribachi is on display at the National Museum of the Marine Corps located in Quantico, Virginia.

The Marine Corps War Memorial was dedicated on November 10, 1954, the 179th anniversary of the Marine Corps. President Dwight D. Eisenhower gave the keynote address to a crowd that included the three surviving Marines in the photograph -Hayes, Bradley, and Gagnon- along with photographer Joe Rosenthal.

The memorial is a living heritage. Fresh inscriptions for Marine battles in Korea, Vietnam, Lebanon, and the Persian Gulf have been added. Frequent Marine-related events, such as veteran's reenlistment or retirement ceremonies, take place there. The annual Marine Corps Marathon begins and ends in its shadow. The largest number of visitors are Marine Corps veterans who come and stand in front of the memorial to the battles in which they fought, bow their heads, and silently remember the Marines with whom they served. 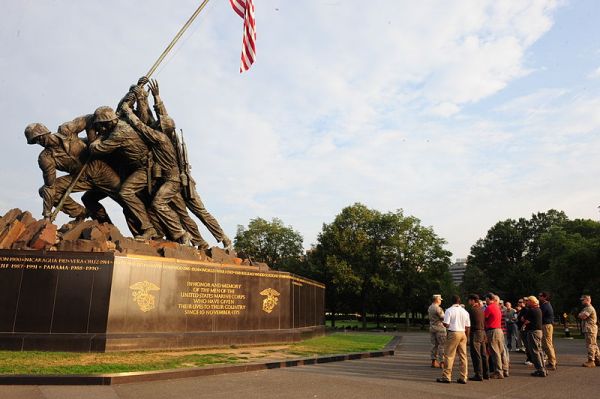 To clarify, the iconic picture is from the second flag raising on Iwo Jima, which was also captured on motion-picture film by William Genaust. This detail is important because the Marines who raised the first flag were sometimes called liars for saying they first raised the flag. You see them overlooked again here with "but it took them until the afternoon of the 23rd to capture the summit". The first Marines captured the summit and planted the flag on the morning of the 23rd.
Abusive comment hidden. (Show it anyway.)
Login to comment.