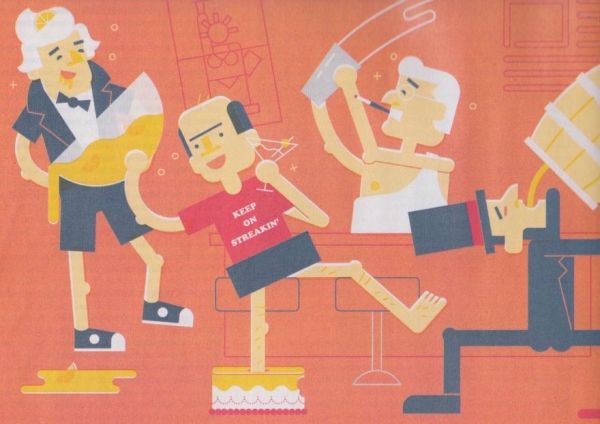 Sometimes the leader of the western world just needs to let off a little steam. 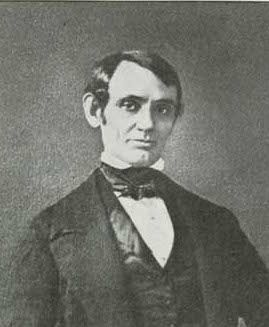 Aptly named Lincoln and Berry, the emporium sold bacon, guns, and beeswax—essentials for any homemaker—plus rum, whiskey, and brandy. That stockpile of tipple came in handy on the day Lincoln had to settle a financial dispute between an employee and a local gambler. According to biographer Carl Sandburg, Lincoln bet the gambler that he could “lift a barrel of whiskey from the floor and hold it while he took a drink out of the bunghole.” If he failed, he’d give the gambler a fur hat. If he succeeded, the gambler got nothing. Abe then dropped to a tactical squat position, lifted the barrel to his mouth, and basically performed a reverse keg-stand with superhuman strength.

Of course, the stunt came back to haunt Lincoln during his 1858 run for Senate. In a series of debates, incumbent Stephen A. Douglas exposed Abe’s past life as a “flourishing grocery-keeper in the town of [New] Salem” who could down “more liquor than all the boys of the town together.” Setting a precedent for eons to come, Lincoln refuted the claim. 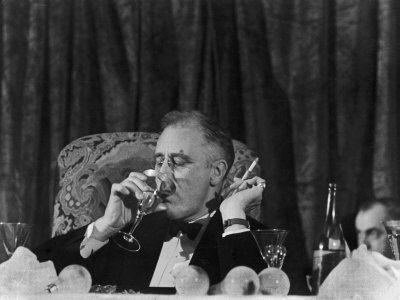 Franklin D. Roosevelt was a man of many talents. Making martinis was not one of them. Most weekends, the president retreated to his Hyde Park mansion in New York, where Hollywood luminaries and lefty warriors had to endure Roosevelt’s atrocious bartending skills. Garnished with olives, lemon peels, and drops of absinthe, FDR’s martinis were so notoriously bad that New York Supreme Court Justice Samuel Rosenman regularly dumped them in a nearby flowerpot.

“Many people—and this is recorded—say ‘the president made the worst martinis I’ve ever tasted,’” Roosevelt’s grandson Curtis told the History Channel in 2005. And plenty of people had a chance to try them; during the war, Roosevelt opened his liquor cabinet for guests nearly every night. But his booziest affair probably occurred when he pulled out all the stops and threw a toga party for his 52nd birthday. Responding to conservatives who called him a dictator, Roosevelt wore a laurel crown. Afterward, a speechwriter lightheartedly addressed Roosevelt as “Dear Caesar” in his letters. The president eventually asked him to stop, according to historian Conrad Black, “fearing the press might get hold of such a letter and misconstrue it.” 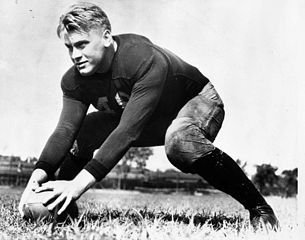 Sure, Gerald Ford was an all-star college football player, but there’s a reason people think he’s a klutz.

He once famously tumbled down the stairs of Air Force One. While golfing in Palm Springs, California, he smacked an electric cart into a shack. During ski trips, TV cameramen would station themselves by the toughest slopes, anticipating a pratfall. So what happened on December 30, 1974, when members of the press corps invited the president to a cocktail party in Vail, Colorado, should have been no surprise. Ford, who was on his Christmas break, walked into the party and “made a beeline for the kitchen,” according to reporter Thomas DeFrank’s memoir Write It When I’m Gone, “asking, 'Who needs a drink?'”

Martini in hand, Ford puffed a pipe and collapsed onto a couch. The president was so off his guard, DeFrank observed, that he set his “loafer dead in the center of a two-pound wheel of Brie on the coffee table ... as he stood up, the cheese stuck to the bottom of his shoe for a heart-stopping instant—before quietly plopping back onto the plate. He never knew.” In the president’s defense, the snack did look like a tiny ottoman. 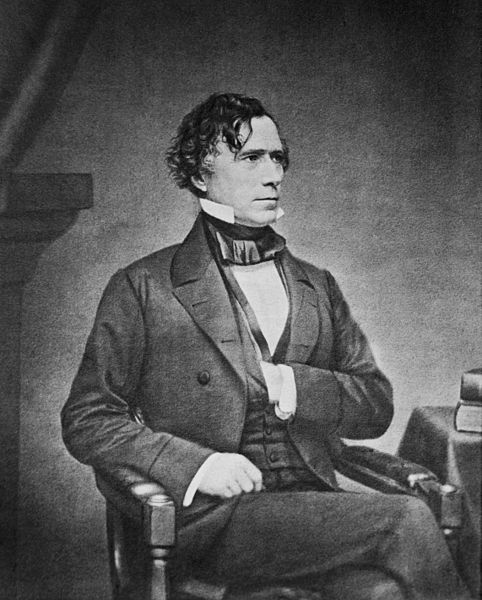 Franklin Pierce loved a stiff drink and was known for his marathon carousing sessions. But the one that occurred on Friday, October 23, 1857, takes the cake. Pierce’s friend Clement March recounts in his diary: “[The general] and I dined at the Tremont at one o’clock, a glass of brandy and water before, a pint of champagne at dinner, went to the Fair Grounds and returned to the Tremont at 5, drank brandy and water till 71⁄2, supped at Parker’s on broiled oysters, beefsteak, and Pomy’s Claret, went to the Theatre, and saw Fanny Kemble and her daughter in a private box by mistake, returned to Parker’s and drank some very old brandy in his private room, went back to the Theatre and took possession of our ‘proscenium box,’ then again to Parker’s and had raw oysters and a bottle of Stein Wine, then to the General’s room, drank two pint bottles of champagne, took a stroll about the streets, and made a call in Fruit Street, where we disbursed some thirty dollars, and at 4 o’clock repaired.”

That’s all, no big deal. 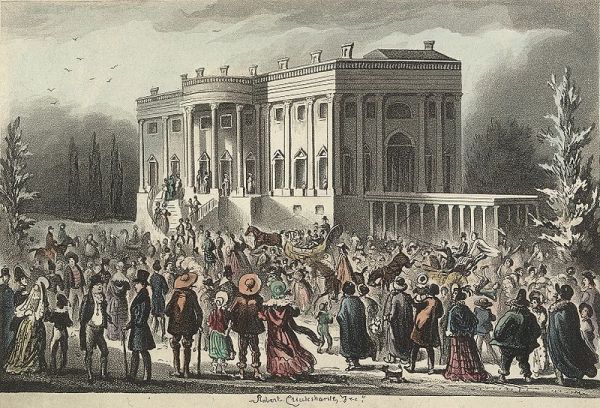 When Andrew Jackson walked into 1600 Pennsylvania Avenue after his inauguration on March 4, 1829, he brought some unwanted company.

His staff had planned a post-inauguration White House reception, but they’d mistakenly opened it to the public, and a thirsty mob quickly besieged the party. According to mortified Congressman James Hamilton Jr., “thousands ... poured in one uninterrupted stream of mud and filth, among the throngs many fit subjects for the penitentiary.” The riffraff darted for the kitchen with a collective eye on the waiters pushing barrels of boozy orange punch. A few barrels tipped over and spilled onto White House carpets and floors. Thousands of dollars worth of crystal and china were flung off serving trays. Fights broke out, and the president was nearly suffocated by a barrage of drunken constituents. That’s when Jackson’s distressed kitchen staff came up with a brilliant idea: Take the hooch outside. According to biographer Robert Remini, “all the windows were thrown open to provide additional exits for those anxious to keep up with the refreshments.” The swarm followed the booze out the window—Mr. President included. 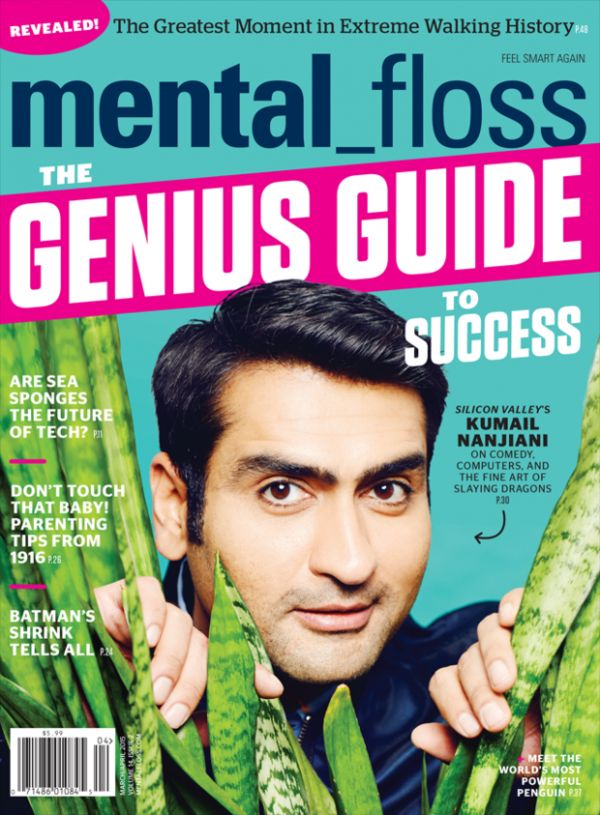 The article above by Brian Abrams is reprinted with permission from the March-April 2015 issue of mental_floss magazine. Get a subscription to mental_floss and never miss an issue!