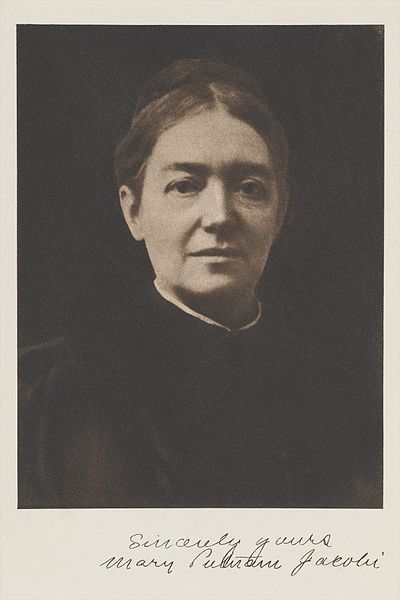 In 1873, Harvard professor Edward Clarke published a book entitled Sex in Education; or, A Fair Chance For Girls. Despite a promising title, what he meant by “a fair chance” was to discourage higher education for women because,

"There have been instances, and I have seen such, of females... graduated from school or college excellent scholars, but with undeveloped ovaries. Later they married, and were sterile."

Clarke’s rationale was that a woman couldn’t menstruate and think at the same time, and trying to do so was dangerous. That was a wonderful way of keeping women out of colleges and universities because, see, it was for their own good. Then as now, a Harvard professor was considered an expert and few took exception to his opinions. One of those who did was Mary Putnam Jacobi, a medical doctor and an extraordinary woman of her time. Jacobi earned a medical degree at Woman’s Medical College of Pennsylvania in the 1860s, then went on to study at France’s École de Médecine, where she was the first woman ever admitted. Jacobi objected to Clarke’s views, but knew that her opinion wouldn’t matter a bit. Instead, she used research.

Jacobi challenged Clarke’s thinly veiled justification for discrimination with 232 pages of hard numbers, charts, and analysis. She gathered survey results covering a woman’s monthly pain, cycle length, daily exercise, and education along with physiological indicators like pulse, rectal temperature, and ounces of urine. To really bring her argument home, Jacobi had test subjects undergo muscle strength tests before, during, and after menstruation. The paper was almost painfully evenhanded. Her scientific method-supported mic drop: “There is nothing in the nature of menstruation to imply the necessity, or even the desirability, of rest.” If women suffered from consumption, scrofula, anemia, and neuralgia, it wasn’t, as Clarke claimed, because they studied too hard.

Jacobi’s work won awards and helped to break down barriers in women’s education. She also led a fascinating life, which you can read about at the Atlantic.