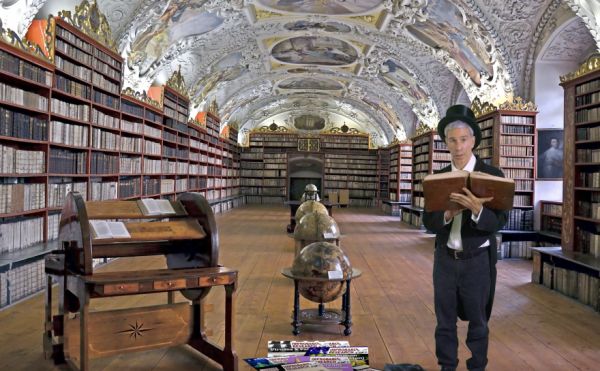 The 32nd First Annual Ig Nobel Prize Ceremony was held last night. These are prizes awarded by the Annals of Improbable Research for scientific and other breakthroughs that make people laugh, and then make them think. For example, a study on how eating ice cream helps a side effect of cancer treatment may seem odd, but it may well improve the lives of some folks. The development of a moose crash test dummy is funny but useful. A study of enemas depicted on ancient pottery is just plain fun. And while the idea that random luck has more to do with success than talent may be obvious to some of us, it's good to have a research paper handy in an argument.

Continue reading to see the complete 2022 winners list, with links to the research papers.

Eliska Prochazkova, Elio Sjak-Shie, Friederike Behrens, Daniel Lindh, and Mariska Kret, for seeking and finding evidence that when new romantic partners meet for the first time, and feel attracted to each other, their heart rates synchronize.

Solimary García-Hernández and Glauco Machado, for studying whether and how constipation affects the mating prospects of scorpions.

REFERENCE: “Short- and Long-Term Effects of an Extreme Case of Autotomy: Does ‘Tail’ Loss and Subsequent Constipation Decrease the Locomotor Performance of Male and Female Scorpions?” Solimary García-Hernández and Glauco Machado, Integrative Zoology.

Gen Matsuzaki, Kazuo Ohuchi, Masaru Uehara, Yoshiyuki Ueno, and Goro Imura, for trying to discover the most efficient way for people to use their fingers when turning a knob.

REFERENCE: “How to Use Fingers during Rotary Control of Columnar Knobs,” Gen Matsuzaki, Kazuo Ohuchi, Masaru Uehara, Yoshiyuki Ueno, and Goro Imura, Bulletin of Japanese Society for the Science of Design.

Peter de Smet and Nicholas Hellmuth, for their study “A Multidisciplinary Approach to Ritual Enema Scenes on Ancient Maya Pottery.”

Very happy to share that our team has received the Ig Nobel Peace Prize for our research on honest and dishonest gossip!#IgNobel @improbresearch pic.twitter.com/GmpZdxSh3O

Alessandro Pluchino, Alessio Emanuele Biondo, and Andrea Rapisarda, for explaining, mathematically, why success most often goes not to the most talented people, but instead to the luckiest.

Very honored to have received a second Ig Nobel prize, this year for Economics, together with Alessandro Pluchino and Alessio Emanuele Biondo for our work on Talent vs Luck ! #DFA #Unict #IgNobel pic.twitter.com/1WaAfLBBs0

You can see the entire awards ceremony at YouTube. The winners for 2022 and previous years are at the Improbable Research website.