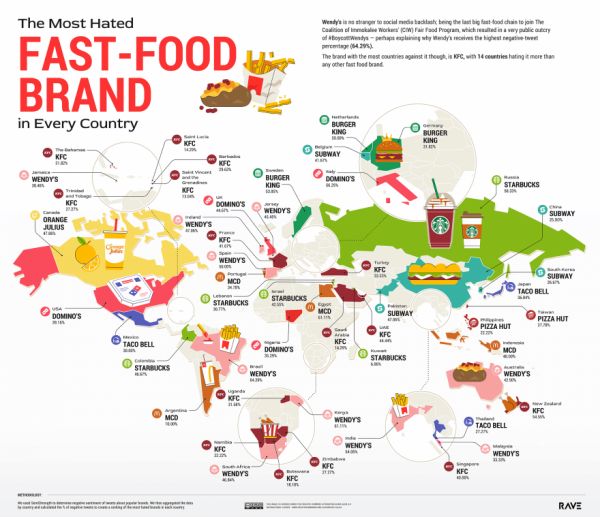 The map above comes from Rave Reviews, who crunched the numbers and ranked the most-hated brands in each nation. They have world maps of overall brands, game companies, and big tech companies, but what we all have in common are our feelings about major fast food companies, because we all eat, we are all occasionally in hurry, and the biggest brands are global. They got their data from Twitter, where it's easy for people to vent their frustrations and register their opinions.

As you can see, the most hated fast food company in the US is Domino's. It look like a lot of people are a Noid with the pizza outlet. It makes sense that Mexico hates Taco Bell the most, but I had no idea that Japan and Thailand also have Taco Bell, where they don't like it. Starbucks and Wendy's have a lot of enemies around the world, but the fast food brand that tops more nations hate list than any other is KFC, according to negative Tweets. Maybe it's because it sounds so good when you decide to go, but afterward you regret spending so much to ingest so much salt and grease.

Check out the complete article at Rave Reviews, where you can see a brand breakdown by each of the United States as well, enlargeable maps, and learn about their methodology. -via The Takeout