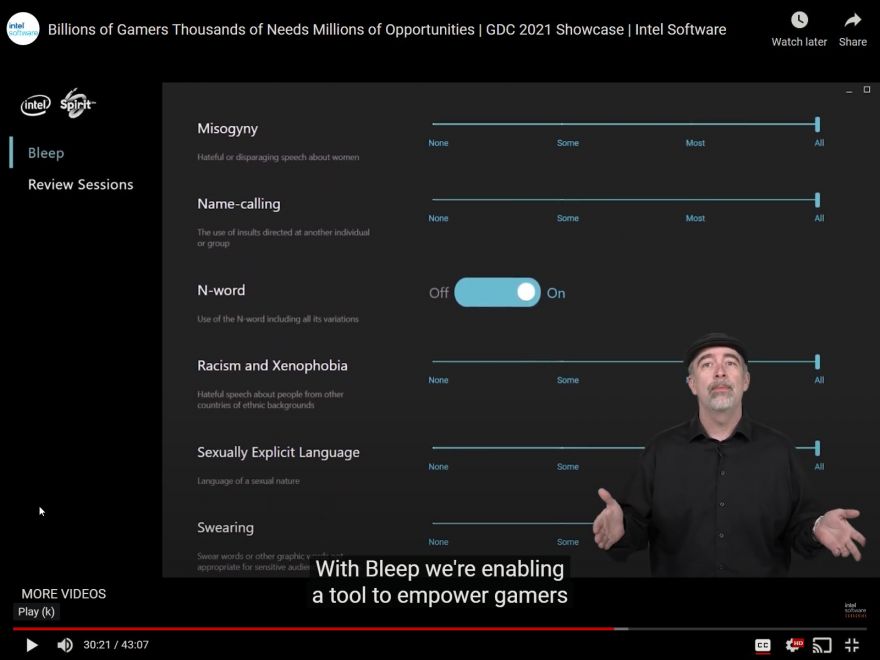 Intel has released a presentation on its newest tool to combat hate speech. The software, called Bleep, was developed in partnership with Spirit AI. Bleep uses AI to censor hate speech in real time during gameplay. True to its name, the tool ‘bleeps’ out offending language, much to the Internet’s amusement, mostly thanks to how users can toggle on and off specific ‘hate speech categories’, as Polygon details:

The screenshot depicts the user settings for the software and shows a sliding scale where people can choose between “none, some, most, or all” of categories of hate speech like “racism and xenophobia” or “misogyny.” There’s also a toggle for the N-word.

“The intent of this has always been to put that that nuanced control in the hands in the users,” Marcus Kennedy, general manager of Intel’s gaming division, told Polygon over video chat. As Kennedy explained it to Polygon, Intel intended for those sliders to give players options, depending on the situation. Certain kinds of shit talk might be acceptable, even playful, when shared between friends, but might not be acceptable when it’s a stranger shouting at you.

Intel also clarified that the technology was not final, and could change between now and release. Still, the idea that people would be OK with some, but not a lot of hate speech came off as absurd to people online. So, as a result, people are now making a ton of memes and jokes that belittle the menu settings. One tweet jokes, “computer, today i feel like being a little bit misogynistic.”

Honestly, it’s certainly a step in the right direction, regardless whether the toggle options are kinda funny.