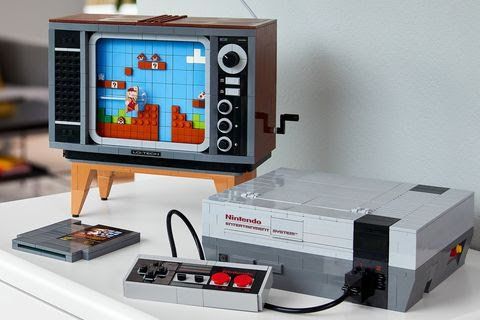 Lego is launching a new Lego set based on Nintendo’s gaming console, the Nintendo Entertainment System (NES). The NES Lego set is a collaboration between Nintendo and Lego, along with the interactive Super Mario-themed sets that were previously launched. The new set contains a whopping 2,646 pieces, as The Verge details:

Designed for adult builders, this new set contains 2,646 pieces that combine to create Nintendo’s first home console as well as an NES controller, a game cartridge that can fit into the console, and a miniature retro TV. The TV displays Mario traversing through a stage from the 1985 classic, and a crank located on the left side of the TV lets you move the mustached plumber up and down between platforms.

Like the earlier Super Mario sets, the Nintendo Entertainment System kit will combine traditional building with digital technology. Placing the Bluetooth-enabled Mario figurine from the Adventures with Mario Starter Course set on top of the TV will produce sounds as if you were actually playing the original 1985 classic.

The Nintendo Entertainment System Lego set will launch on August 1st — the same day as the Super Mario Lego sets — for $230. The Super Mario kits incorporate different characters and obstacles for Mario to tackle, including an expansion that lets him square off against his arch-nemesis, Bowser.

image via The Verge