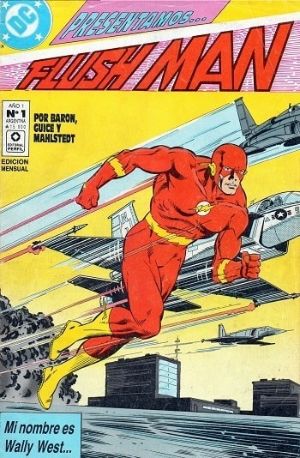 Think you know your comic book superheroes? In a different country, in another language, you might not even recognize your favorites. Over the last few decades, there have been some major changes depending on future, copyright, and various other reasons. For example, in the 1990s, the Argentinian version of the Flash was named Flushman. Really. And it wasn't a matter of being lost in translation.

Flushman sounds like someone you'd call when your toilet tank is overflowing, not the fastest man alive. And yet, that's how Latin American readers knew the character in the '90s, after a publisher called Perfil scored the license to print DC comics in Argentina and neighboring countries. Among those comics was The Flash, but unfortunately, there was already an Argentinian gossip magazine called Flash. To avoid being sued (or simply having hurtful rumors printed about their persons), Perfil's editors decided to come up with a new name. After considering options like El Rayo ("The Ray") or El Relampago ("The Lightning"), they settled for Flashman, only to decide at the last moment that it was still too close to Flash. Hence: Flushman. The most logical solution.

Note that toilets make the same sound all over the world, so even in Argentina, "Flushman" still sounded like a poo-related superhero. Everyone hated it, including many of the people working on the comic. The translator claims he refused to type that stupid name in the scripts, to the editor's annoyance, which explains why the character was accidentally called "Flash" about once per issue.

Read the rest of that story and four others about how comic book superheroes were changed in other countries at Cracked.