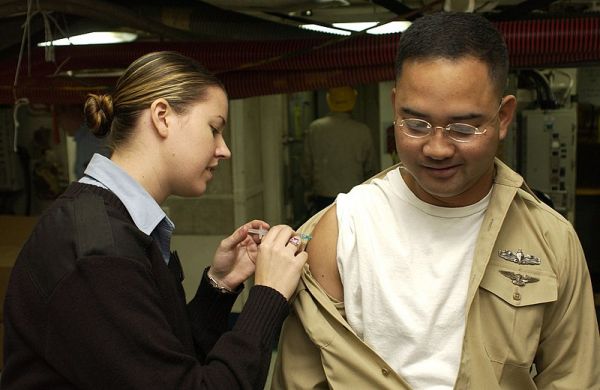 Even thought measles was considered eradicated in the US in 2000, there have been 695 cases reported this year. How immune are you? If you received a measles vaccination many years ago, you might need a booster shot. Children who received the vaccine between 1963 (when it was first available) and 1989 got one measles shot. After 1989, two shots were recommended to confer maximum immunity.

CDC guidelines for measles vaccines haven't changed since the current outbreak began. The department says that anyone born after 1957 should have received at least one dose of the vaccine, which is 93 percent effective against the disease. But if Gen Xers want to be extra cautious, they can ask their doctor to test their antibody levels to see if they're immune. If they're still vulnerable to measles, they can get a second booster shot, which together with the initial vaccination is about 97 percent effective.

But the CDC's current priority is children who haven't been vaccinated at all. Thanks to the misinformation around vaccines, a growing number of parents have opted not to get their kids vaccinated, which has fueled the current health crisis in the U.S. According to a 2016 review of measles studies, out of 970 measles cases, almost 42 percent of patients had skipped the vaccine for non-medical reasons.

And that's why we have a nationwide measles outbreak now. If you don't have vaccination records or a way to get them, you can have your antibodies tested. But if you've actually had measles, your immunity is considered to be high. Read more about the CDC guidelines at Mental Floss.

I'm a big believer in vaccinations and (usually) get the flu vaccines every year but I wasn't aware of Prevnar and Shingrex - thank you for the tip, nubwaxer!
Abusive comment hidden. (Show it anyway.)
Old people, get the pneumococcal vaccinations, Prevnar 13 and 23 and if you've had chicken pox get the shingles vaccination, preferably the newest more effective Shingrex. And of course, get your flu shot as soon as that vaccine is available each Fall.
Abusive comment hidden. (Show it anyway.)
Login to comment.