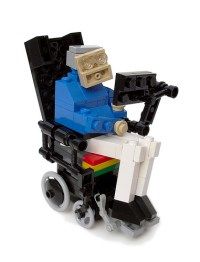 Ten years ago, Stephen Hawking went for a ride on the Vomit Comet and experienced the loss of gravity. Ochre Jelly (Iain Heath) was impressed by the story and paid tribute by building a LEGO version of Hawking, which went viral. Of course it did. The LEGO sculpture has just a few simple shapes, but everyone who saw it instantly knew who it was. Hawking started Ochre Jelly on a new career of sculpting familiar pop culture figures in LEGO with a minimalist goal: make them recognizable with the fewest bricks possible. We've been getting a kick out of his creations ever since. Heath tells the story of how Hawking inspired him at the Brothers Brick.

To celebrate the tenth anniversary of Hawking's zero-G flight (and his own 50th birthday), Heath took the original Hawking sculpture on its own ride in the Vomit Comet! Oh yeah, he also got some footage of himself on the flight.  -Thanks, Iain!