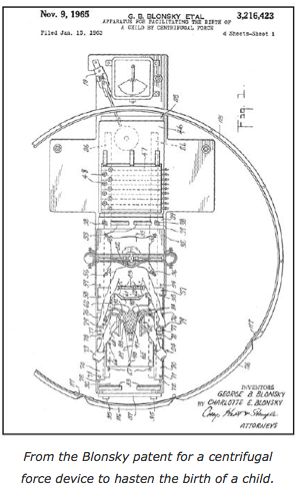 The following is an article from The Annals of Improbable Research.

The Blonsky centrifugal-force birthing device has proved an inspiration for many people for many purposes. This is a brief, partial survey of some of their ideas.

In 1999, an Ig Nobel Prize in the field of managed health care was awarded posthumously to George and Charlotte Blonsky of New York City, N.Y., and San Jose, Calif., for inventing a device (U.S. Patent #3,216,423, for an “apparatus for facilitating the birth of a child by centrifugal force”) to aid women in giving birth. The woman is strapped onto a circular table, and the table is then rotated at high speed. The Blonskys’ niece, Gale Sturtevant, came to the Ig Nobel ceremony and accepted the prize on behalf of George and Charlotte (for details, see the January–February 2000 issue of AIR). In 2013, the Ig Nobel ceremony again honored the Blonskys, this time by creating and performing an opera about them and their invention (for details, see this post). 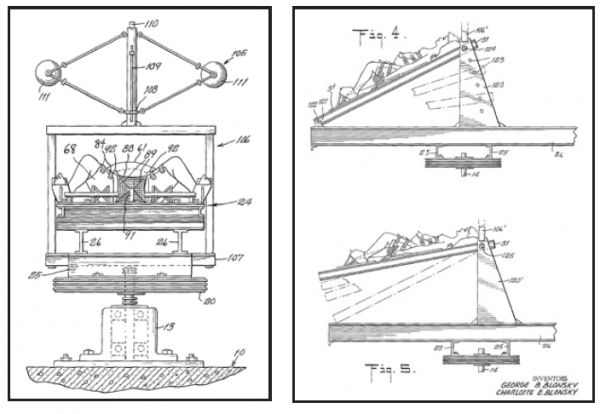 Additional details from the Blonsky patent.

The Blonsky device was never used in an actual human birth, so far as we have been able to determine. But it has not gone unnoticed.

Several patents explicitly cite the Blonsky patent as one of the pillars upon which their innovation is built. Some adapt aspects of or notions from the Blonsky device for different purposes. Other aim to improve on one or another aspect of the Blonsky achievement. And at least one earlier invention seems, in a way, to hint at the coming of the Blonsky idea.

A general-purpose centrifugal machine appears to foreshadow the Blonsky device, though Amilio speaks only of non-birthing uses. 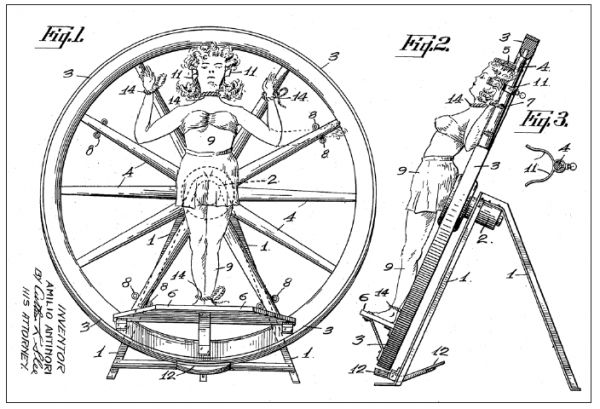 Detail From the patent for Antinori’s device to spin a person or other entity. Preceding the Blonsky invention by 20 years, it seems to be intended for use in ornamental, rather than childbirth, situations.

A display device wherein a preferably slightly inclined and rotatably mounted wheel, having spokes, is provided with a lateral shelf or support adjacent the periphery and parallel with the axis of said wheel to support a display, such as a performer of an illusion... [a] second support being also provided to engage the head and support a performer while inverted. Braking means are also provided to prevent rotation of the wheel while a display is being secured, or to stop said wheel after the same has been rotated.

Several birthing inventions are inspired by the Blonsky patent, yet are, ironically, not intended for use during a birth in which the mother and child are spun. Here are two inventions for conventional birthing situations. 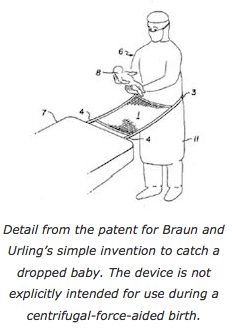 A neo-natal safety net for selective connection between a delivery table and an attending obstetrician, or between a delivery table and a neo-natal table, thereby providing a safety net for the space there between for catching a newborn infant in the event that the baby accidentally slips from the hands of the obstetrician after delivery, or from the hands of an attending nurse during the post-natal care of the baby.

a device to render protection to a newborn infant against being injured due to an accident in which the infant is dropped onto the floor or other solid object at or following the moment of birth in a delivery room or in a birthing room. The invention is a safety net to catch a falling newborn at or immediately after the moment of birth, in combination with a collection system for the waste body fluids incident to the birthing process whereby these fluids are collected in a disposal receptacle that is a part of the invention. 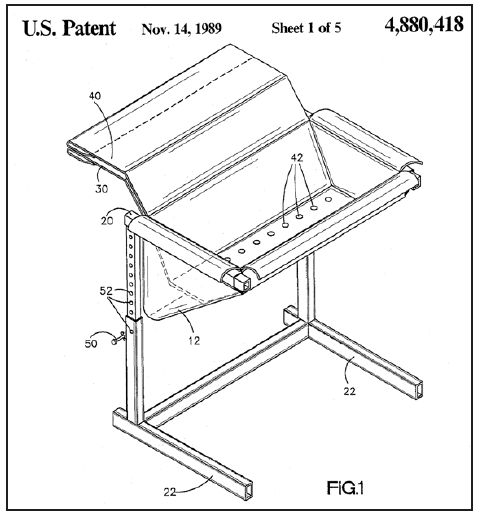 Detail from the patent for the Tramont baby-catching device, to catch a baby should it fall or be dropped after exiting the mother during the birthing process. Like the Braun/Urling invention, this device is not explicitly intended for use during a centrifugal-forceaided birth.

The Blonsky patent explicitly affected the subsequent invention of other centrifugal-force devices that are, in the main or entirely, intended for use other than the delivery of a child. Here are three examples.

A centrifugation machine for medical treatment of humans includes a plurality of support arms whereon a patient is restrained by straps, railings and footrests with his head adjacent the center of rotation. The patient is restrained in a supine position, or by means of a truncated pyramid shaped accessory mounted at the center of rotation, the patient may be restrained in a half-seat position. Twenty g forces can be applied. 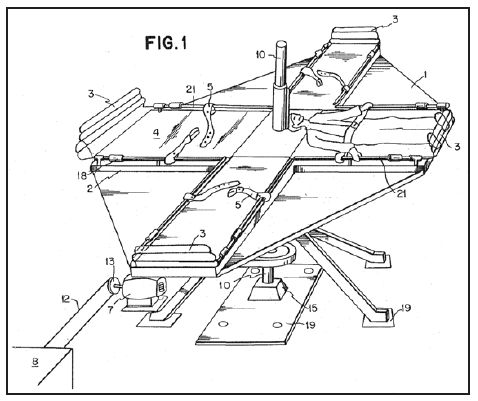 Detail from the patent for Capelo’s device to spin persons. 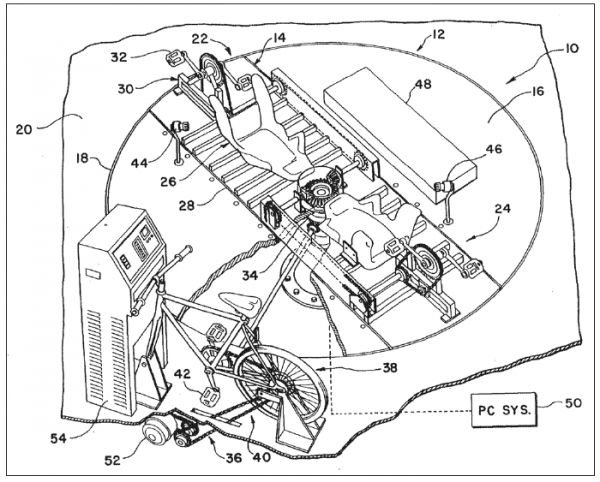 Detail from the patent for Muhlenburg and Vernikos’s device to use human pedaling power to spin a person or persons. This device is not explicitly intended for use during childbirth.

The turntable 12 carries two rider stations 22 and 24. Station 22 includes a recumbent rider seat 26 mounted by brackets (not shown) on plural parallel slats 28, and a pedal mechanism 30 mounted adjacent the rider seat 26. The pedal mechanism is a bicycle-type which includes pedals 32 mounted on opposed pedal cranks.

When rotated by human power, the pedals 32 impart rotation to a central hub 34 through a drive train that includes sprockets and chain driving a pinion meshing with a bevelled crown gear for a 4:1 reduction, for example. 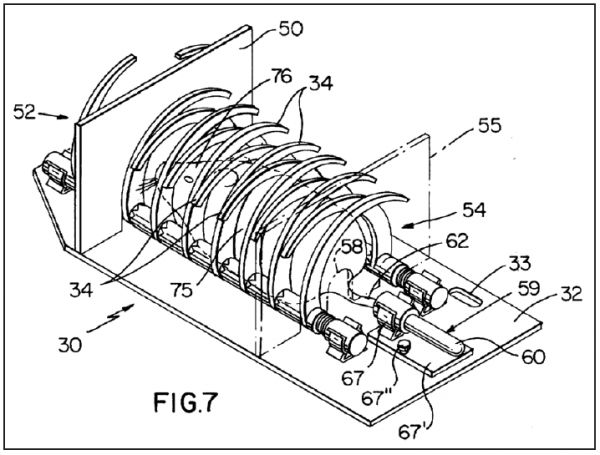 Detail from the patent for Locsei’s invention to draw test sample blood from one or more animals.

A method and apparatus for bleeding a test animal to provide a blood sample therefrom by centrifuging the test animal while being held in a predetermined position....

it is believed that not only does this or described. invention provide a more humane and less traumatic method for bleeding live test animals, but also this invention provides an improved method and apparatus for bleeding a test animal to provide a blood sample that has intact cellular constitution, freshness of sample and absence of contaminants as will be readily apparent to those skilled in the pathological art, and particularly those skilled in the clinical pathological testing of blood samples from test animals...

While the various features of this invention are hereinafter described and illustrated as being particularly adapted to provide a method of bleeding a live test animal from the tail thereof, it is to be understood that the various features of this invention can be utilized singly or in any combination thereof to provide a means for extracting a blood sample from other parts of the live test animal as desired. 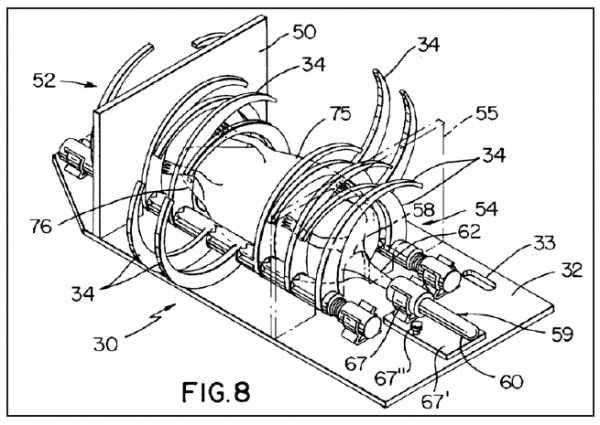 Further details from the patent for Locsei’s invention to draw test sample blood from one or more animals.

Devices Not Necessarily Inspired by Blonsky

Some inventions offer alternatives to the central Blonsky idea of applying centrifugal force. Here are two such.

Apparatus for controlling the childbirth labour comprising: an electromyographic unit (4) with sensors (3) associated therewith for detecting the electrical signals of a parturient’s uterus and means (6) for analysing and processing said electrical signals, and a pneumatic belt (1) to be fixed around the parturient’s abdomen and having sensors (15) associated therewith to detect the variation of the internal pressure due to uterine contractions, and means (2) for inflating said belt to provide a thrust as an aid for the expulsion of the fetus, characterized in that a device (7) is provided, associated with said sensors (15) and (3), to control the activation of said means (2) for the inflation of the pneumatic belt (1). 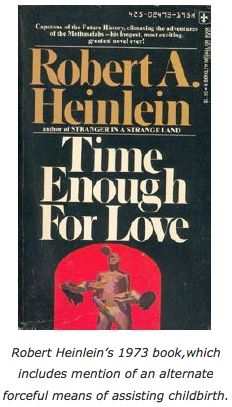 BONUS: We received this note in 2005. It refers to a discussion of the Blonsky birthing device:

When I attended your talk at I-CON, you showed a diagram of a centrifugal birthing chair, and I mentioned that Robert Heinlein had used a futuristic version of it in one of his novels. I finally got a chance to dig through my unorganized pile of books and found the reference, as you asked.

In his Time Enough for Love, page 201 of the 1973 Berkeley Medallion paperback edition, Heinlein has his protagonist create and use an acceleration assisted birthing chair. Aside from using space drive to cause actual acceleration instead of the centripetal acceleration used in your patent form, it’s pretty comparable. 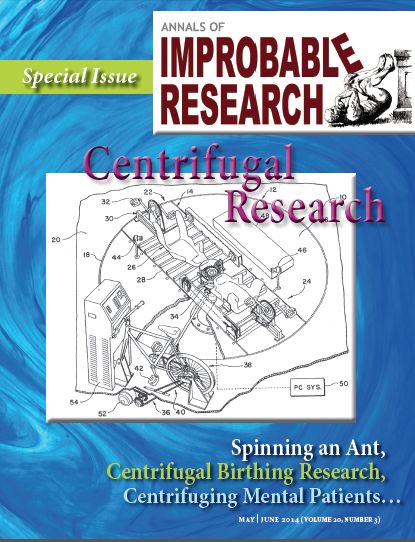 This article is republished with permission from the May-June 2014 issue of the Annals of Improbable Research.

You can download or purchase back issues of the magazine, or subscribe to receive future issues. Or get a subscription for someone as a gift! Visit their website for more research that makes people LAUGH and then THINK.