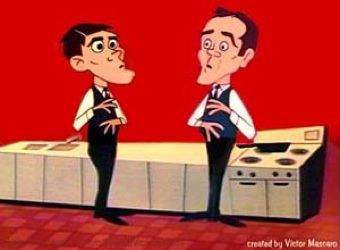 Bewitched is an icon in pop culture and in the history of '60s television. The show ran from 1964 to 1972 and had a hugely successful 8-year run. But the question remains in every person's head who has watched or been a fan of Bewitched: why the two different Darrins? 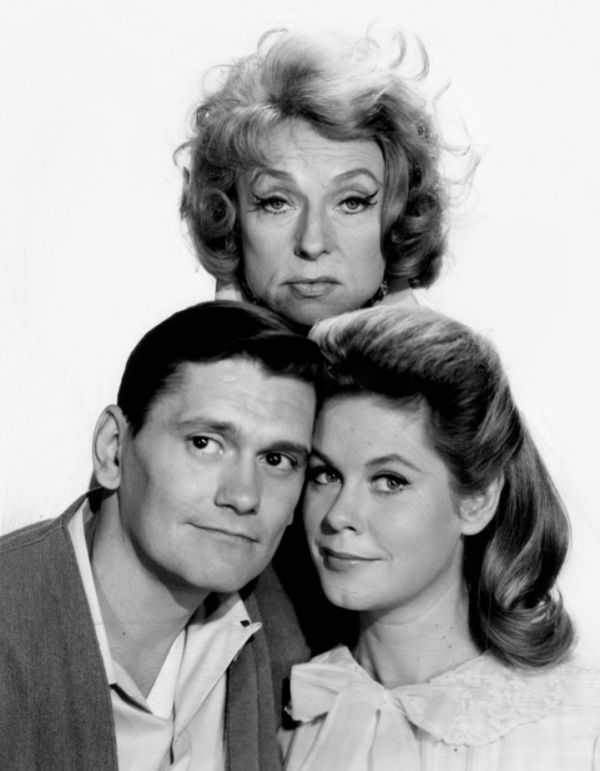 Okay, the show's premise was simple: a beautiful witch falls in love with a mortal guy, they live in the suburbs, he had a normal office job and …hilarity ensues. Well, Bewitched debuted in September of 1964 and was a ratings smash from the word go. The very attractive Elizabeth Montgomery was cast as the lead, Samantha the witch, and a skittish young actor named Dick York was cast as her mild-mannered but hapless husband Darrin.

At this time, Dick York was a working actor -his biggest credits were his appearance in the Spencer Tracy film Inherit the Wind (1960) and an episode of The Twilight Zone. Agnes Moorehead, a distinguished film and stage actress who had even appeared in Orson Welles' legendary Citizen Kane (1941) was also cast as the Darrin-hating witch-mother of Samatha named Endora.

The plots were simple and uncomplicated: Darrin and "Sam" meet and fall in love, get married, and try to live as normal a life as possible, facing the normal expected situations of any young married couple (especially a '60s sitcom married couple) -his job, her homemaking, jealousy, and the usual "battle of the sexes" stuff. Montgomery's calm, cool demeanor was the perfect contrast to York's mugging and mild histrionics. 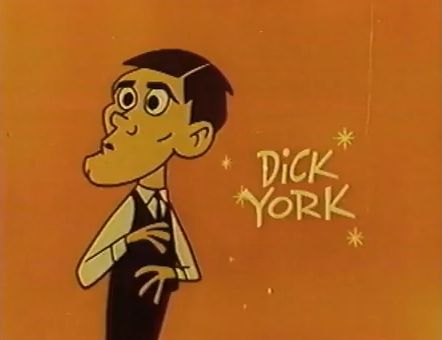 Things seemed to be going great for both York and the show itself. In 1968, he was even nominated for an Emmy award for his portrayal of the likable Darrin. But Dick York had a secret he didn't tell the show's producers when he was cast.  He had appeared in a movie in 1959 called They Came to Cordura, and during filming he had severely injured his back. This injury caused constant excruciating pain. His life had already become a daily ritual of drugs, pills, and painkillers.

It came to everyone's notice, and to help the suffering actor, it became routine to have scenes and plots contrived and written in which poor Darrin was sitting down, lying down, or reclining (usually sitting at his office desk at work, or in bed or on the couch at home) as much as possible. But because of the slapstick nature and physical comedy required on such a show, occasionally situations arose that would tax even a man in good physical condition.

On one such occasion, poor Dick York was hanging up 15 feet in the air, beside actor Maurice Evans, who played Darrin's warlock father-in-law on the show. It had been a bad day already for the show's co-star; he was taking pills to sleep at night and receiving shots of novocaine and cortisone in his back on bad days to keep working.

The technicians were shining a light in York's eyes during the setup for the shot. According to York, "Somehow all that flickering made me feel weird." He gamely tried to run his lines during the run-through, but he started to "zone out" and feel woozy and funny.

York asked a friend on the set to lower him from the 15-foot platform he was on. He reached the ground and his body felt weak and unstable. At this point, the shaky actor collapsed and was rushed to the hospital. 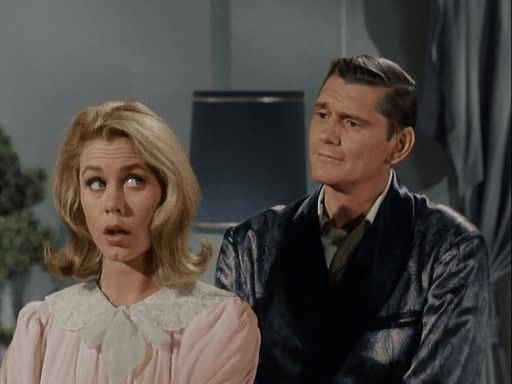 The show's producer, Bill Asher (who was Montgomery's husband in real life) visited York in the hospital as he was recuperating. He knew of York's anguish and asked him point blank is he wanted to quit the show. York said yes.

After leaving Bewitched, Dick York's career dried up and he faded into relative obscurity. Word of drug addiction spreads like wildfire in a town like Hollywood, and this was surely a contributing factor in the actor's scarcity of work, plus the obvious typecasting of York as Darrin on Bewitched. 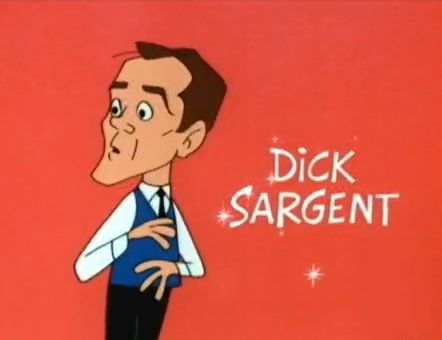 Another young man named Dick Sargant was immediately hired to replace Dick York as "Darrin number 2." The legions of Bewitched fans who tuned in were surprised at the switch and the ratings plummeted. Vaguely resembling Dick York, Dick Sargent played Darrin with a more defiant attitude toward his witchy in-laws.

In 1969, with Dick York as Darrin (his final season), the show was a ratings hit at #11, but when Sargent took over the role, ratings soon dropped and the show went to #24. Poor Dick Sargent never did catch on with the show's loyal viewers and Bewitched was soon cancelled.

Dick York remained on his back for a full year after leaving Bewitched and fell on hard times soon after. Bad investments had left him broke, and his teeth rotted out (a common problem for drug abusers), so he and his wife were reduced to cleaning houses for a living.

In a tragic twist of fate, the actor found out later in life that offers had actually been coming in for him, but because his listing with the union was somehow messed up, he was never notified. In 1982, Dick York finally got his life back together, got his teeth fixed, and went back to work. He did guest spots on Fantasy Island, Simon & Simon, and a TV movie called High School, USA.

York's comeback was short-lived, however, and he devoted the rest of his life to fighting his life-threatening illnesses and helping the homeless. Dick York, a TV icon, died in 1992 at the age of 63. 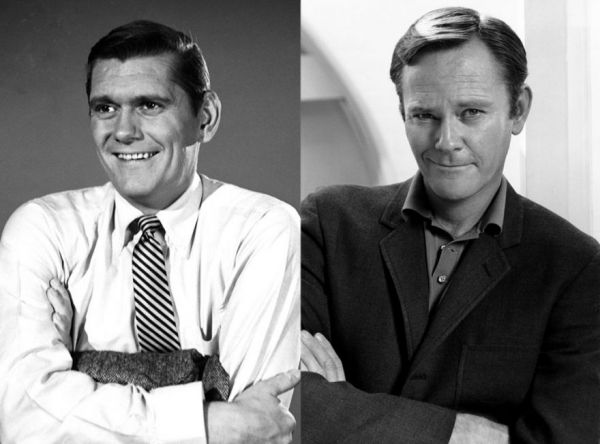 When Dick Sargent joined the show, it lasted another 3 years so it was not "soon" cancelled as it's described in the article.
Abusive comment hidden. (Show it anyway.)
Can you blame the second Darrin for the show's troubles? A lof of the original episodes were well-thought-out stories about acceptance and tolerance. By the time Darrin #2 came in, the stories were formulaic. Magic stuff happens, Darrin's boss/client/etc sees it, and Samantha saves the day with a catchy jingle to tie up the freaky loose ends. It's as painful as the "everybody knows but nobody knows" formula that is Dexter, or the "never get off the island" formula of Gilligan's Island (or Lost).
Abusive comment hidden. (Show it anyway.)
Thanks! Fixed.
Abusive comment hidden. (Show it anyway.)
Thanks for the article. I was too young to watch the show on first run, but syndication in the 70's branded its theme song into my brain. Small correction, York's ill-fated cowboy movie was They Came to Cordura -- see http://www.imdb.com/title/tt0053351/ .
Abusive comment hidden. (Show it anyway.)
It's interesting to see an instance of this where bad-blood wasn't involved. I honestly hadn't really thought about it, but always had assumed Dick York had had a falling out with producers. I imagine most people at the time thought that as well. If they had gotten the full story, they might have been a bit more forgiving of the swap. Kept in the dark though, they could only use their gut to determine if they could follow the show with such a drastic change of casting.