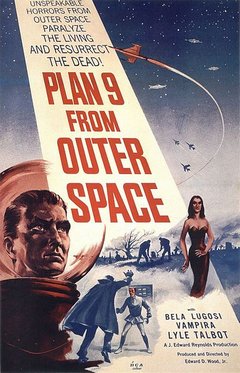 The following is an article from Uncle John’s Great Big Bathroom Reader.

Ask any film buff to name the worst directors of all-time, and you can be sure Ed Wood's name will come up. He's become a legend for films like Plan 9 From Outer Space -a movie so bad it needs to be seen just to be believed. This piece was written by someone who knew him -in fact, the reluctant star of Plan 9, Gregory Walcott.

Early in our marriage, Barbara and I lived in a cottage just across the street from the First Baptist Church of Beverly Hills. Ed Reynolds, a chubby little man who attended the church, had come out to Hollywood from Alabama to make Biblical films. He talked to me occasionally, knowing I was in the movie industry, about his "calling" to produce religious movies with life-embracing themes. I tried not to encourage him, knowing he had no background in film production. Naive individuals like Reynolds are easy bait for Hollywood hucksters.

About a year later, Reynolds came to me and said he was going to finance a film starring Bela Lugosi. He wanted me to play the young romantic lead. I said to him, "But Ed, Bela Lugosi is DEAD!"

Reynolds said, "Well, that's not a problem. There's a very ingenious director, Ed Wood, who has some excellent footage of Lugosi, and he has written a very clever screenplay around that film."

"But Ed, I thought you wanted to make religious pictures!"

"Yes! That's the ultimate plan. But Biblical pictures with big sets, large casts and costumes are very expensive. This fellow, Wood, has convinced me that by making a few exploitation films, I can build up my bankroll to where I can then make big budget Biblical films."

I had never heard of Ed Wood, so I asked to see the script. It was the most atrocious piece of writing I had ever seen. A child could have written better dialog. I said, "Ed, this is a terrible script, and I hate to see you get involved in this project and lose your money."

"No, no! I want you to meet the director," he insisted. "I'll arrange a luncheon."

Reynolds was dazzled by Hollywood and couldn't be dissuaded.

Before the meeting, I looked into Wood's background, and discovered he had done a few cheesy low-budget pictures. It was incongruous that sweet, sincere Reynolds, who wanted to produce inspirational Biblical motion pictures, would be connected with Wood, whose movies could only be booked in fleabag theaters on back streets.

At the luncheon, I found Wood to be a charmingly handsome man, who gushed about how perfect I would be working with a top-notch Hollywood crew and a good cast.


Wood resembled Errol Flynn, and was clearly a smooth promoter. In fact, he started attending Reynolds' church and showed an interest in becoming a convert to the faith. This pleased Reynolds, convincing him that Wood was sincere and a godsend. I was there the night Wood was baptized. He stood in the pool, resplendent in a white robe. His boyish face had the look of an angel. As he was immersed in the baptismal waters of the church, Ed Reynolds beamed in satisfaction and said stoutly, "Amen!" 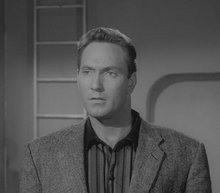 I reluctantly agreed to do the film, Plan 9 From Outer Space, as a favor to Ed Reynolds, working at scale wages on a four-day schedule.

The first day I reported to work on a tiny sound stage-behind a sleazy bar and a disreputable hotel. I knew right away that I had made a mistake. The sets looked like something a 6th grade class has hastily put together. The crew seemed fairly normal, but the cast members were a bizarre assemblage of Wood's cronies: hopeful actors, former wives, an astrologer, an over-the-hill wrestler, a few cross-dressers, and his chiropractor.

The set had an ambiance of an old-time carny side-show, not a professional movie sound stage. I went home that first day, and I remember distinctly saying to my wife, "Honey, this has got to be the worst film ever made."

Unfortunately my assessment was prophetic, and the movie turned out to be a debacle. Poor Ed Reynolds could get no distributor to release the picture, and he lost his investment. A couple of years later he died, a broken man at the early age of 52. 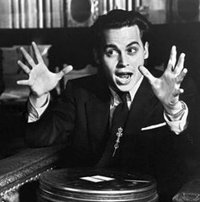 The film was eventually released to television and shown during late-night ghetto hours. Amazingly enough, it picked up an audience; it was so shockingly bad that it was actually funny.

A freaky Edward D. Wood phenomenon began. Even Tim Burton, director of the Batman mega hits was so fascinated by the quirky auteur that he made a movie of his life story in 1994. The film, Ed Wood, received favorable reviews but limited box office success. It did, however, add to Ed Wood's growing international fame.

I am still puzzled as to why people are attracted to Ed Wood's ghastly legacy and his ludicrously inept films. Perhaps it's like the fascination one finds looking at a macabre auto wreck. Perhaps Wood appeals to people who feel lost, or who rebel against society's stereotypes.

I think my son, Todd, may have hit upon the real reason: "It's that thing we fear, in ourselves, that we, too, are not really talented, and in time that truth will be revealed."

I do say, I have to admire Wood for his flint-faced determination to do the thing he loved the most, making movies, and his uncanny ability to complete the projects, no matter how tasteless and poorly made. Who knows, maybe effort should be recognized as well as art.

In his later years, Wood dashed off dirty magazine stories to survive and drank heavily. Evicted from his rat-hole apartment, he moved in with a friend in whose bed the 54-year-old Wood died quietly and unexpectedly in December 1978. His ashes were scattered in the ocean off the coast of Southern California.

As a followup to Greg Walcott's piece, we thought we'd include a few comments from critics about Plan 9 From Outer Space.

"Some say [Plan 9 From Outer Space] is the worst movie anyone ever made. Certainly it's the worst movie Ed Wood ever made. And nobody but Wood could have made it. The lunacy begins with a portentous introduction from our old friend Criswell, the clairvoyant. 'Greetings my friends,' Criswell reads from his cue card. 'We are all interested in the future because that's where you and I are going to spend the rest of our lives.' While we're still mulling over the meaning of that statement, Wood hits us with the heavy-duty special effects -UFOs flying over Hollywood Boulevard. Actually, they're only hubcaps, superimposed on a pseudo-sky."

-The Worst Movies of All Time, by Michael Sauter

ATTACK OF THE UNDEAD 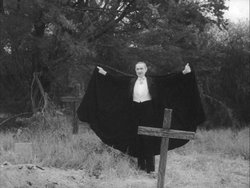 "God knows what the first eight "Plans" were, but Plan 9 is a doozy... Aliens Dudley Manlove and Joanna Lee (today a successful scriptwriter) were sent by The Ruler to raise the dead so that they'd attack the living. That's just about what Wood tried to do with his dead friend Bela Lugosi, billed as the star of the film although he died prior to production. Wood had a couple of minutes of footage of Lugosi from an aborted project, so he simply inserted the snippets into the film and repeated them over and over so that Lugosi had adequate screen time. Lugosi's character -The Ghoul Man- was played in the rest of the movie by a chiropractor, an extremely tall fellow who spends his screen time with a cape covering his face so we won't know he's an impostor. The ruse doesn't work, but I don't think Wood really cared."

-Guide for the Film Fanatic, by Danny Peary 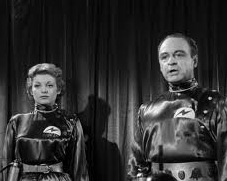 "Words such as amateurish, crude, tedious, and aaarrrggghhhh can't begin to describe this Edward D. Wood film with Bela Lugosi in graveyard scenes made shortly before his death....

The unplotted plot by Wood has San Fernando Valley residents troubled by UFOs of the worst encounter. Humanoid aliens Dudley Manlove and Joanna Lee land their cardboard ship with a ninth plan to conquer the world (the first eight failed, you see). They resurrect corpses, including Vampira, Tor Johnson and Lugosi's double. The results are unviewable except for masochists who enjoy a good laugh derived from watching folks make fools of themselves."

"The graveyard set provides the film with many of its eerie moments, thanks to a number of dead tree branches and cardboard tombstones; in one scene a policeman accidentally kicks over one of the featherweight grave markers.

Despite the resourcefulness of the director, there are slight technical shortcomings in the final version of Plan 9. Even Wood's staunchest defenders will admit that the Old Master seemed to have a tough time with lighting. In one scene, as Mona McKinnon runs in horror from Bela Lugosi's double, she goes directly from a graveyard at midnight to a nearby highway at high noon. This same confusion between night and day occurs several times in the course of the film."

-The Golden Turkey Awards, by Harry and Michael Medved

"Money was always a problem for Wood. Budgets were routinely nonexistent, forcing him to film on the cheap, scrimping...as best he could... How cheap was Plan 9? The flying saucers are hubcaps suspended by wires. In several scenes the movie jumps from daylight to nighttime and back. And outdoor lawn furniture doubles as bedroom furniture...In all of the literature about Plan 9 (and there's reams of the stuff) one question about the movie has never been answered. If Plan 9 was to revive the dead, what were the other eight plans?"

-Why the People of Earth are "Stupid," by Tom Mason

See also: Robot Monster: The Ultimate Golden Turkey and The Worst Movie of All Time? 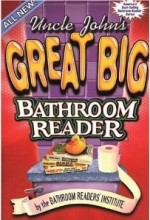 The article above is reprinted with permission from Uncle John's Great Big Bathroom Reader.

The book is a compendium of entertaining information chock-full of facts on a plethora of topics. Highly recommended!

Greg Walcott is one to talk. His performance was every bit as atrocious as the script - in at least one case, worse. Where the script called for :

"These things have been seen
for years. They're here, it's a fact."

He read it as "They here". Listen for yourself.
Abusive comment hidden. (Show it anyway.)
Login to comment.