One of my Myth students calculated the minimum number of times Odysseus cheated on Penelope: 6,573

In Homer's Illiad and Odyssey, Odysseus, King of Ithaca, spent 20 years away from home while on many adventures. His loving wife, Penelope, was suspected of infidelity but never gave in to her hundred suitors.

Let us set aside the revolting rumors about her alleged romp with Apollo that produced Pan. That is not canonical.

What is canonical, according to Homer, is that Odysseus was relentlessly pursuing other women to almost Wilt Chamberlain levels of promiscuity. 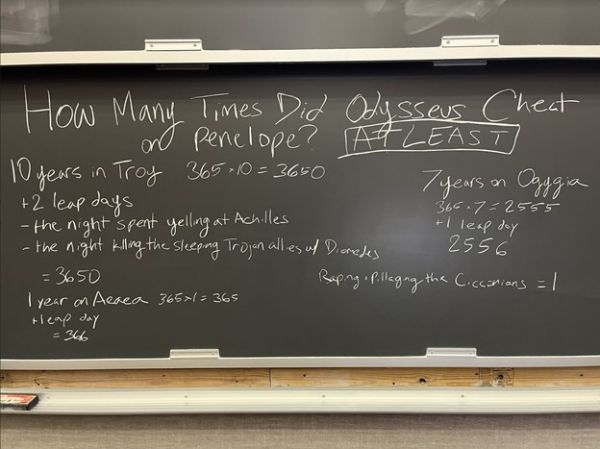 But precisely how many times did Odysseus cheat on Penelope during his two decades away from home? A student of classicist Dr. Jeremy Swist at Brandeis University crunched the numbers. His calculations concluded at 6,573.

This math shows that it is a literature student's math...I mean, no complex function to get closer to a factual number for once but the main problem is that it is, well, very rudimentary. It only accounts for the number of days as an occurance of "cheating" (and it is also wrong for factoring leap days that did not exist by that point - just saying) disregarding any checking to the source material to actually verify how many - if any - occurance of cheating happened during that period...
Abusive comment hidden. (Show it anyway.)
Start New Comment Thread...