Guns 'n' Roses released their first album, Appetite for Destruction, in July of 1987, making it 35 years old. You might think it couldn't have been that long ago, and your memory is somewhat correct. The album sat in stores for a year before it took off and became #1 and stayed on the charts for six more months. Radio wouldn't play it because most of the songs contained f-bombs, stores wrapped the offensive original cover art in brown paper, and MTV wouldn't play the video for "Welcome to the Jungle." Geffen records founder David Geffen had to negotiate with the channel to get a single play.

Geffen and the network came to a compromise: They’d play the video at 4 a.m. EST and 1 a.m. PST, when they thought no one would be watching. However, the opposite happened: MTV’s switchboard lit up. “Every kid in America is calling them requesting this video,” Al Coury, Geffen’s head of promotion at the time, told Zutaut. From that point on, MTV added the video to their regular rotation, which helped increase record sales.

Read the story behind the iconic album and some of the hit songs it spawned at Mental Floss. Yeah, there are videos.

If you were an adult you couldn't get away from it, either. My station sponsored a "battle of the bands" talent show in 1989 and of 15 bands, ten of them played "Sweet Child o' Mine."
Abusive comment hidden. (Show it anyway.) 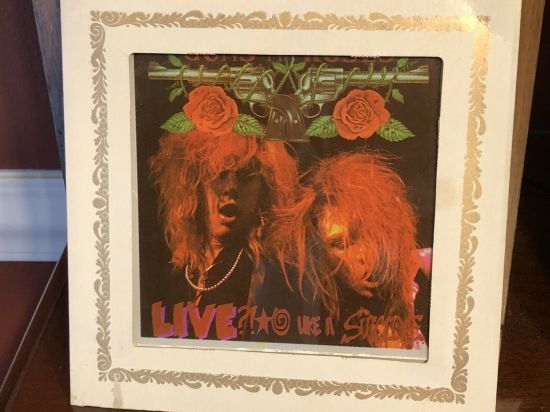 If you were a kid growing up in the 80s when this album came out, you didn't know anyone who wasn't listening to this album (or at least watching the music videos on MTV). It was extremely similar to a Michael Jackson album releasing. Anyone who was cool at the skating rink had Guns n Roses t-shirts on, and the DJ at the skating rink had GNR in rotation. And when you went to local carnival/festivals, GNR prizes were there (like this mirror picture frame).
Abusive comment hidden. (Show it anyway.)
Start New Comment Thread...