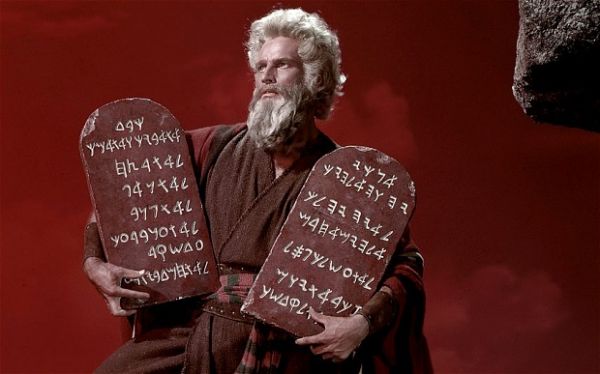 Why do Americans eat bacon or sausage and drink orange juice for breakfast? Why do we shave our armpits? Why did we ever buy a tie for Fathers Day? So many of the everyday rituals we take for granted aren't because of tradition, but because someone wanted to sell us something. While some of these schemes are pretty well known, at least to Neatorama readers, others may surprise you. You know how churches want to put up a plaque or a stone monument with the ten commandments at government buildings? You might have wondered why they chose that instead of, say, the Sermon on the Mount, or John 3:16. That started with Cecil B. DeMille.

People are pretty protective over the monuments to the Ten Commandments that appear on government property across the country considering they didn’t exist until Cecil B. DeMille needed to promote a movie. The Fraternal Order of Eagles had wanted to put them up for some time, but they couldn’t raise the funds until they teamed up with the director, who paid for hundreds of monuments modeled after the tablets in his 1956 movie. He even sent Charlton Heston out to the unveiling ceremonies.

Find out about other "traditions" that started out as marketing stunts in a list at Cracked.

Coca Cola Santa Claus sounds alright. My whole thing is, I only drink coke like once or twice a year at thanksgiving and christmas. And I find that to be quite enjoyable. Soda is one of those things where, the less you drink it, the more enjoyable it is when you do. Exponentially.
Abusive comment hidden. (Show it anyway.)
When I was 2 or 3 years old, we lived in a tiny apartment and had few, if any, Christmas decorations. My Dad picked up some groceries on Christmas Eve as the store was getting ready to close. They were taking down some decorations, so my Dad snagged several Coca-Cola Santa Claus posters and a cardboard standee. Those were our Christmas decorations for a few years, and really cemented my visions of Santa... with a Coke. Luckily, my parents didn't buy soda pop.
Abusive comment hidden. (Show it anyway.)
Always do the opposite of product marketing. Unless pizza is involved. Or Iced Coffee. Or Ice cream.
Abusive comment hidden. (Show it anyway.)
Login to comment.