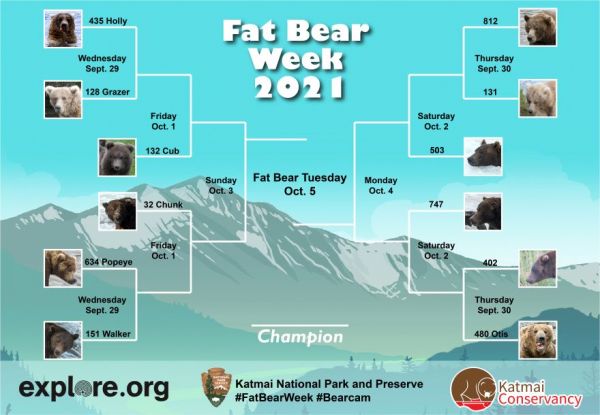 It's an event we look forward to every year. The voting has started in the 2021 Fat Bear Week competition! Every year since 2014, Katmai National Park in Alaska shows off their many brown bears in an online tournament. The bears have spent their summer putting on pounds to help them get through winter hibernation, so for them, fat is a good thing. It's a bit dangerous to put bears on a scale, so weight gain must be estimated by pictures. The fattest bears, plus one fat bear cub that won a play-in poll, are competing for nothing but internet fame, yet the tournament draws human attention to Alaska's wildlife and the challenges they face. Some bears have also gained lifelong fans by packing on the pounds. We're glad to see Otis back, and Holly, a previous winner who took last year off to raise a cub. The daily elimination polls can be found here. The daily matchups will continue through October 5, and the winner will be announced a few days later.

I see they finally removed me from the Brackets as I requested
Abusive comment hidden. (Show it anyway.)
Login to comment.