We know the outlines of the story of television. In the early 20th century, great minds across the globe, like Scotsman John Logie Baird, German Paul Nipkow, and American Philo T. Farnsworth were trying to combine motion pictures and radio broadcasts, with varying success. Which technology was best had to be decided before anyone would invest in a vast infrastructure of broadcasting networks, content, and receivers, and then selling to idea to the public. These competing systems were put on hold for World War II, and then Farnsworth's electronic television system emerged victorious. But let's back up to 1939, when a British boy's magazine printed an article about "television." The British were proponents of John Logie Baird's mechanical television system, and the history the medium was still short. When no one had a receiver, they turned to "television theaters."

Northern holiday crowds at Blackpool and Morecambe in July, 1934, were the first to test the pleasures of real television theatres in which reproductions of events happening up to 20 miles away were projected on the screen. A slight last-minute hitch prevented Morecambe's Television Theatre opening on the day planned, so for a short while the Blackpool venture, located inconspicuously near the Central Pier, stood unchallenged as the only place in Britain where the public could enter a darkened room and see a televised moving picture on the screen.

The inventor of the apparatus used at Morecambe was Mr. F. Cockcroft Taylor.

Actors and actresses who were willing to permit themselves to be televised in 1934, had, in the studio, to make-up like cannibals in full war paint. First they had to paint their faces dead white, then thick blue lines were put down the sides of their noses to bring that part of the face out properly. Their eyelids had to be painted mauve, their lips blue, and their eyebrows were made enormously big and heavy, like George Robey's. The rest of their faces were left dead white.

By 1939, things had improved somewhat. Read a contemporary account of early television in Britain at Malcolm's Musings: Strange but True. -via Strange Company 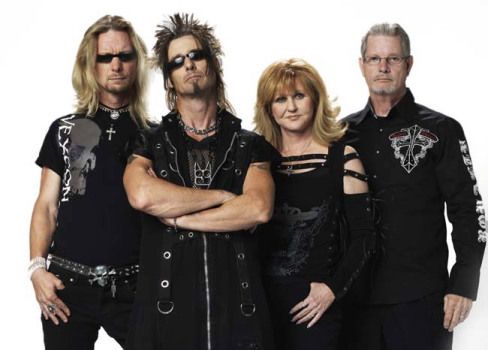 TV today is beyond silly. I haven't had an actual television in my home for probably 20 years. During Hurricane Ida, I'm at my moms house and I decide to watch TV. I found this show called Billy The Exterminator? or something? If you haven't seen it, it's really something. They all look like the photo here, and they go around capturing baby racoons and getting rid of bed bugs. But they all look like roadies for Motley Crue. Man, TV is weird.
Abusive comment hidden. (Show it anyway.)
Start New Comment Thread...