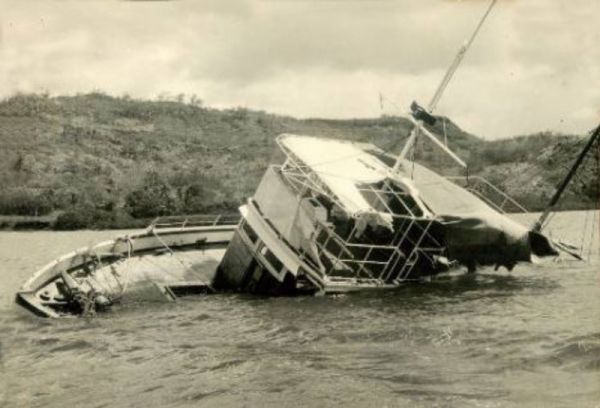 In October of 1955, the charter vessel MV Joyita set off from Apia in Samoa bound for Tokelau, an island off New Zealand. The boat never arrived. A search effort turned up nothing, but five weeks later, the Joyita was found 600 miles away, listing to the side as you see above. There was no sign of the 16-member crew, nor of the nine passengers aboard when the boat was last seen. The four tons of cargo -medical supplies, food, and timber- were gone.

As the recovery team boarded the boat, things only got more sinister. The radio was tuned to 2182 kilohertz, the international marine distress channel, indicating that they had required help. The port engine clutch and the auxiliary pump were both disassembled and unconnected, meaning the ship had only been running on one engine. The clocks were stopped at 10:25 pm, and the lights were on. The logbook, sextant, and other navigational equipment were gone, along with all three lifeboats. Finally, there were some eerie signs of possible violence. The ship’s bridge had been smashed by something and covered with a canvas awning, moreover, the deckhouse’s windows were broken. On deck, a doctor’s bag was found open containing a scalpel, stethoscope, and lengths of bloody bandages.

No trace of the crew or passengers was ever found. So what happened? There are plenty of theories, cobbled together from clues left on the ship, some more sinister than others. Read the story of the MV Joyita at Cracked.