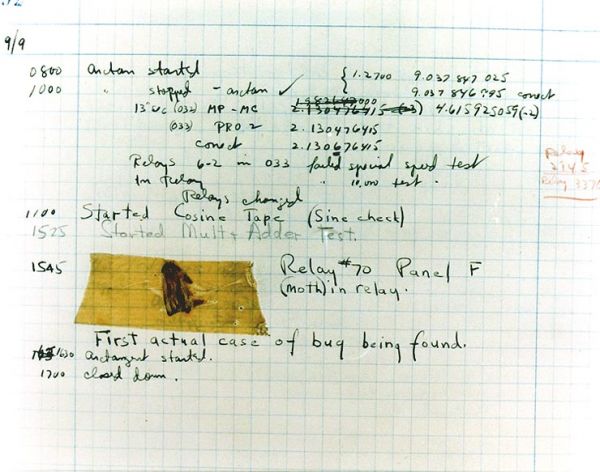 Why do we call a software glitch a "bug"? You've got to call it something, and you may as well ask where the word "glitch" came from. Still, language origin stories are often interesting, and the idea of an insect causing problems in our computers makes sense. Insects love small, protected places to hide, and they reap all kinds of destruction from our point of view. It's also a handy excuse for human error.

According to the most often-repeated origin story, in 1947 technicians working on the Harvard Mk II or Aiken Relay Calculator – an early computer built by the US Navy – encountered an electrical fault, and upon opening the mechanism discovered that a moth had had flown into the computer and shorted out one of its electrical relays. Thus the first computer bug was quite literally a bug, and the name stuck.

But while this incident does indeed seemed to have occured, it is almost certainly not the origin of the term, as the use of “bug” to mean an error or glitch predates the event by nearly a century.

The first recorded use of “bug” in this context comes from American inventor Thomas Edison, who in a March 3, 1878 letter to Western Union President William Orton wrote: “You were partly correct. I did find a “bug” in my apparatus, but it was not in the telephone proper. It was of the genus “callbellum”. The insect appears to find conditions for its existence in all call apparatus of telephones.”

The genus "callbellum" does not exist, and turned out to be Edison telling a joke. But don't take that as Edison coining "bug" for a technology glitch. Edison was in the habit of taking other people's ideas. Read the story of how we came to see "bugs" in the system at Today I Found Out.

The characterization "the first computer bug was quite literally a bug" isn't quite correct. "Bug" was used in the Mark I, before the famous bug mentioned here. See https://chsi.harvard.edu/harvard-ibm-mark-1-language. Also, Hopper's oral account at https://archive.org/details/podcast_from-archives_grace-hopper-howard-aiken-th_1000425230042 says it was a man who taped the moth into the computer’s logbook. ("the operator got a pair of tweezers ... and below it he wrote “First actual case of bug being found.”)
Abusive comment hidden. (Show it anyway.)
dang i didn't know thats where Bug came from, ha
Abusive comment hidden. (Show it anyway.)
Login to comment.