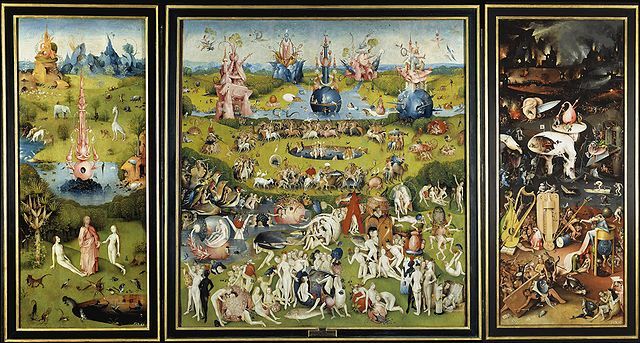 The Garden of Earthly Delights, painted by Hieronymus Bosch between 1490 and 1510, has been a cause of debate and different interpretations as to what Bosch wanted to portray in this artwork. From sexual freedom, to acid trips, to anti-church ideology, the triptych oil painting’s meaning leaves a lot to imagination. London curator James Payne believes that the artwork is just “pure and simply, hardcore Christianity:”

Depicting the Biblical creation of the world on its outer panels, the work opens up to reveal elaborately detailed visions of Adam and Eve in the Garden of Eden, then humanity indulging in all known earthly delights, then the consequent torments of Hell. It is that last panel, with its abundance of perverse activities and grotesque human, animal, and human-animal figures (recently made into figurines and even piñatas) that keeps the strongest hold on our imagination today.

Payne’s explanation goes into detail on all aspects of the work, highlighting and contextualizing details that even avowed appreciators may not have considered before. While identifying both the possible inspirations and the possible symbolic intentions of the figures and symbols with which Bosch filled the triptych, Payne emphasizes that, as far as the artist was concerned, “his images were a realistic portrayal of sin and its consequences, so in that sense, it wasn’t surrealism, it was realism.” This bears repeating, given how difficult we moderns find it “to look at this painting and not see it as surrealism or a product of the subconscious, not see it as a sexual utopia, a critique of religion, or even a psychedelic romp.” Just as The Garden of Earthly Delights tells us a great deal about the world Bosch lived in, so our views of it tell us a great deal about the world we live in.

When you stare into the abyss, the abyss stares back. If your stare into the garden of earthly delights long enough, the garden stares back... This picture always seemed to be surreal... but of cause, it has been painted long before surrealism and all this other stuff came into the world. I will use the coming weekend to take a different and closer look to this really great piece of art.
Abusive comment hidden. (Show it anyway.)
thats a wild painting
Abusive comment hidden. (Show it anyway.)
Start New Comment Thread...