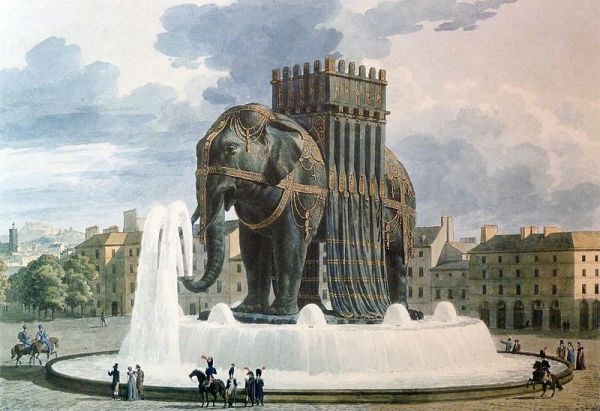 It was a decisive moment in French history when the notorious prison known as the Bastille was stormed in 1789. The Bastille was destroyed, but the site in central Paris remained important to the people of France. What kind of monument should be in that place? For 32 years, it was a huge elephant.

When the Bastille fell in July 1789 and subsequently demolished, there was some debate as to what should replace the former prison. It was decided that the area would become a square celebrating liberty, and a column would be erected there. A foundation stone was laid but the column never materialized. Instead, a fountain was built in 1793, depicting the Egyptian God Isis with water flowing from her breasts. But Napoleon had more grandiose plans. In 1810, the emperor decreed that a new fountain was to be erected, in the shape of an elephant, one that would be heroic and delightful to all who beheld it.

Napoleon's vision was that the elephant should be made of bronze, incorporating the cannons he had seized from enemies. But Napoleon would only be in power a few more years, and that spelled doom for the elephant monument, although it outlived him for some time. Read about Napoleon's elephant at Amusing Planet.