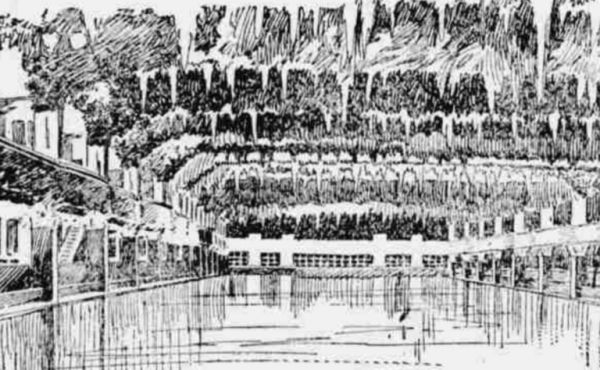 Back in the day when newspapers were just about the only form of daily entertainment, New York papers printed stories that may or may not be true to fill pages, and no one complained as long as they were entertaining. The 1895 hijinks of a goat and his cat friend were just more fodder for the morning edition. A goat, "who had been living on tomato cans, nails, and broken glass for months," smelled the papier-mâché icicles that were being installed above the new ice skating rink. The goat could not reach them, and set out to enlist the help of Dolph, a cat who was renowned for doing tricks on stage.

The goat ran down Lexington Avenue and stopped in front of Mr. Falk’s house, where he bleated a special signal to summon his feline friend. Dolph saw his goat friend through the window and exited the basement door to join him. “There was consultation and then off the two started, and a few moments later halted in front of the ice palace.”

The goat gave Dolph a few instructions, and the cat took off, scrambling up the felt-covered walls toward the ceiling. He then dodged into a hole that marked the uncompleted part of the sub-ceiling. According to The Sun reporter–who noted that details of the story were not all necessarily true–Dolph bit off a few icicles for his goat friend.

After satisfying his friend’s hunger, Dolph decided to satisfy his curiosity by prowling around between the two ceilings. Meanwhile, workmen continued building the icicle sub-ceiling, eventually sealing the hole through which Dolph had entered.

This unlikely explanation led to Dolph being trapped in the ceiling for eight days, which may be true enough. Less likely was the epilogue about the goat and cat no longer speaking after the incident. Read the story and how it turned out at The Hatching Cat.  -via Strange Company