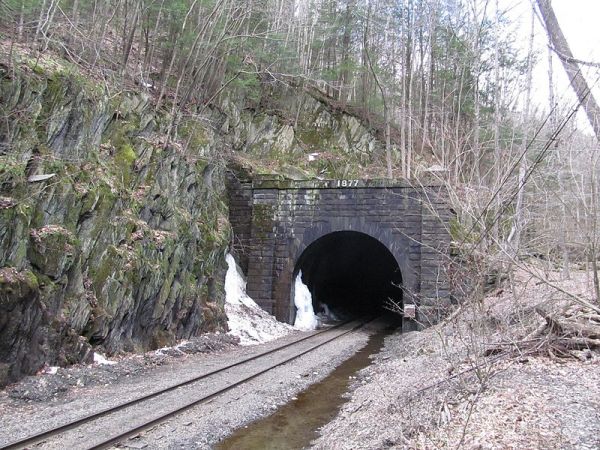 The Hoosac Tunnel in western Massachusetts is a 4.75-mile railroad tunnel running under the Hoosac Mountain Range, built to connect Boston with the Erie Canal. Digging this tunnel was not an easy project. It began in 1851 and was supposed to have been completed in three years and cost little more than a million dollars. Instead, it took 24 years and $20 million, and 192 men lost their lives building it.

As noted above, the tunnel’s completion took a horrendous death toll.  Men fell down the tunnel’s thousand-foot deep center shaft.  Men were burned alive.  Men were blown to bits by nitroglycerine explosions.  A not-untypical disaster involved three workers, Ned Brinkman, Billy Nash, and Ringo Kelley.  Kelley accidentally set off some explosives, burying the other two men alive.  Instead of running for help, Kelley fled the scene, leaving his coworkers to their fate.  One year later, Kelley’s dead body was found in the tunnel, at the same spot where Brinkman and Nash had died.  It was widely believed that the ghosts of his victims had gotten their revenge.  In 1868, three years after this triple tragedy, a mechanical engineer named Paul Travers wrote to his sister:

“Last night Mr. Dunn and I entered the great tunnel (unfinished) at 9 p.m.  We traveled about two miles into the shaft and then stopped to listen.  As we stood there in the cold silence, we both heard what truly sounded like a man groaning out in pain.  As you know, I have heard that sound many times during the war.  Yet when we turned the wicks up on our lamps, there were no other human beings in the shaft.  I haven’t been this frightened since Shiloh.  Mr. Dunn agreed that it wasn’t the wind we heard.  Perhaps Nash or Brinkman?  I wonder.”

Scary stories piled up around the tunnel, from the voice that kept laughing as a tree fell on workers, to a blue headless ghost, to a man who walked in and was never seen again, to the woman who scoffed at a tunnel superstition -right before she died. Read a sampling of why the Hoosac Tunnel is considered one of the most haunted tunnels in the world at Strange Company.