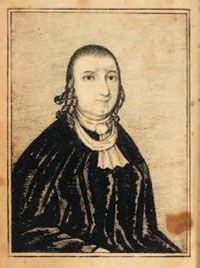 In 1776, 23-year-old Jemima Wilkinson contracted a deadly disease, most likely typhus. Upon recovery, Wilkinson declared that she had died, and was now a new person. This new person identified as neither male nor female, and took the name "The Public Universal Friend." Wilkinson was a Quaker, which is formally named the Society of Friends, so the name made some sense, however generic it was. The Friend began to preach and drew plenty of followers.

The Quakers were not happy with the breakaway sect, and The Friend's followers eventually formed a commune in the wilderness of New York. Read the story of The Public Universal Friend and their followers at Cracked.