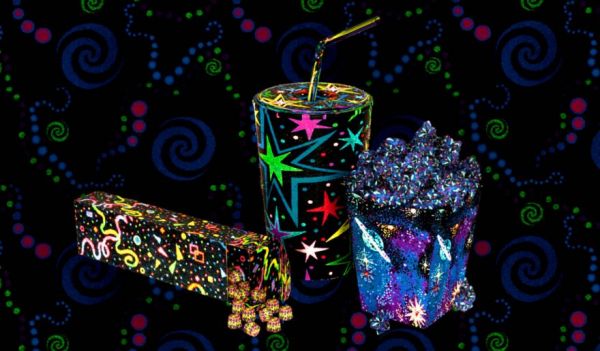 After a year of pandemic precautions, you may have trouble envisioning what a movie theater interior looks like. But think back to the movies you saw in the 1990s, and what an experience it was to go out to the local multiplex, maybe in a mall, maybe with an arcade attached. It was an era in which theaters tried to be total experiences, like a theme park. And you might particularly remember the cosmic carpets that seemed to be in every theater across the country.

But why the carpets? According to Dimensional Innovations, it was actually a practical maneuver. Once the global blockbuster era hit full swing (think Jurassic Park, Titanic, et al) people were going to the movies in droves, spilling their sugary drinks and melty Milk Duds on the floor in record numbers. “There used to be tile underneath the seats,” says Trotter. “It made it easy to clean, but people complained about how their feet would stick to the floor. These places were dirty.”

Enter the carpets—ones with hectic patterns in every shade of neon known to Pantone. “It’s got so many different colors in it, you can spill coffee or Coke or popcorn and it won’t show,” Trotter says. The Dimensional Innovations team would actually dump Coca-Cola on these new carpets, let it soak in, walk all over them, and check to see if it changed the colors. It didn’t. Even blacklight lights wouldn’t reveal the stains. “It was a pretty genius design,” says Trotter, still laughing, “just horrible.”

The carpets were only part of the movie theater aesthetic that was unique to the '90s. Read more about the look and where it went at A24.  -via Boing Boing

looks cool, and covered up all the idiots dropping their food and drink everywhere - genius
Abusive comment hidden. (Show it anyway.)
Login to comment.