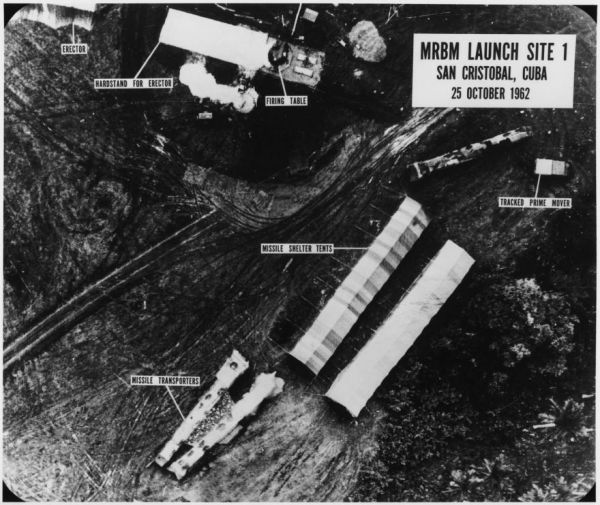 Juanita Moody dropped out of college in 1943 to serve in the US Signal Intelligence Service, analyzing coded messages during World War II. She stayed on after the war, rising in the ranks of the SIS despite being both a woman and a civilian, until she was in charge of intercepting data from most of the world. By the 1960s, that included Cuba. The SIS had by then become the NSA, charged with data collection which was then handed over the CIA for analysis. That became an issue when it came to the Soviet buildup of arms in Cuba, as the White House wanted to be kept up-to-date with any new information, and Moody's boss Louis Tordella was wary of skipping over the CIA.

Impressed by her expertise, alarmed by what she had to say, and perhaps concerned that no one was providing the White House with this level of detail about an aggressive military buildup in Cuba, [assistant secretary of defense Edward] Lansdale asked Moody to write up her findings. Along with a few colleagues, she spent the next three days and nights compiling “wheelbarrow loads of material” into what she called “a special little summary for the assistant secretary of defense.” When she was done, Moody urged Tordella to “publish” her report, meaning circulate it among the intelligence agencies, the White House, the State Department and the military. Cautious not to step outside NSA’s prescribed role, Tordella rebuffed her, but he did send it to Lansdale, who sent it to President Kennedy, who returned it with his initials—signaling he’d read it. “I told my troops, ‘Keep this updated,’” Moody said of her report. “‘If you get anything to add to it, do it immediately and tell me.’”

Over the next few months, Moody repeatedly, and unsuccessfully, pleaded with Tordella to release her updated report. By early 1962, she said she was “really getting scared.” The amount of military equipment piling up in Cuba didn’t square with the Soviets’ repeated assertions that it was all “defensive.” Details about Soviet technicians “moving around in Cuba” were especially worrisome, and by this point the NSA likely knew the Soviets had moved surface-to-air missiles (not to be confused with ballistic nuclear missiles) to Cuba as well.

Moody was determined to rush data to the president, and the CIA was not happy about it. Read the story of Juanita Moody's role in the Cuban Missile Crisis, and the rest of the NSA career, at Smithsonian magazine.

Fascinating post. There's a book waiting to be written here. It appears the "electrograms" used by Moody were the forerunner of NSA's Criticom Network
Abusive comment hidden. (Show it anyway.)
Login to comment.