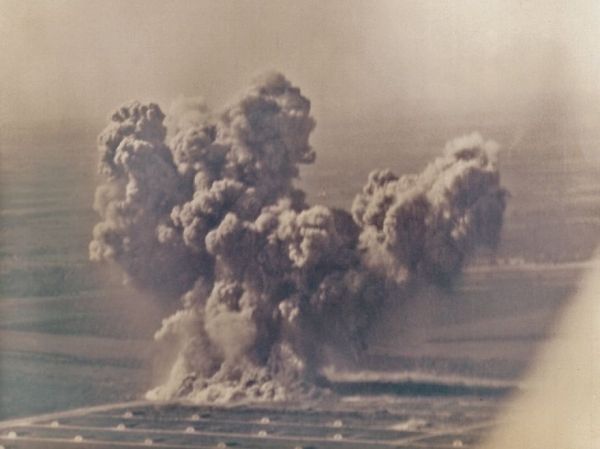 When retiring a nuclear warhead during the Cold War, the technicians at Lackland Air Force Base’s Medina Annex took care to remove the enriched uranium that gave it the unearthly power of a nuclear bomb. However, there remained quite a bit of TNT that was used to ignite the bomb, plus depleted uranium and natural uranium. The detonators also remained. On November 13, 1963, one of those warheads was interred underground in the nuclear weapons bunker at the Annex. Then something happened to trip a detonator.

“There’s no direct answer to what caused it that we know of,” insisted Floyd Lutz, who is eighty and owns a water treatment business in San Antonio. “When the igloo was fixin’ to ignite, we were inside setting down those units.” As soon as that loud crack! sounded, he and Ehlinger scampered through the open doorway amid dust and smoke.

“The fire started, so we hauled ass,” Lutz explained. They sprinted past Huser, yelling as they went.

“[They] didn’t have to tell me to run,” said Huser. “They went one way; I went the other down Perimeter Road. I guess it had rained the day before, and I bogged down in a ditch and fell, got back up and turned around and looked, and there was smoke coming off of the igloo’s vent. I was going to go to the next set of igloos to set off an alarm. I got about halfway, and the whole thing blew up.”

The blast itself was bad enough, as retold by those who were there, but those in the surrounding area thought World War III had erupted. And would there be nuclear fallout? Read the story of the 1963 detonation at Texas Monthly. -via Damn Interesting

didnt know bout that
Abusive comment hidden. (Show it anyway.)
"Shocked, Mary picked up a bottle of liquor on the way home so that she and Hilary could celebrate what she hoped had been his narrow escape." My favorite sentence of the whole article. I'm sure they needed it. This happened about a few years before I was born. I can't ever remember hearing about this incident.
Abusive comment hidden. (Show it anyway.)
Login to comment.