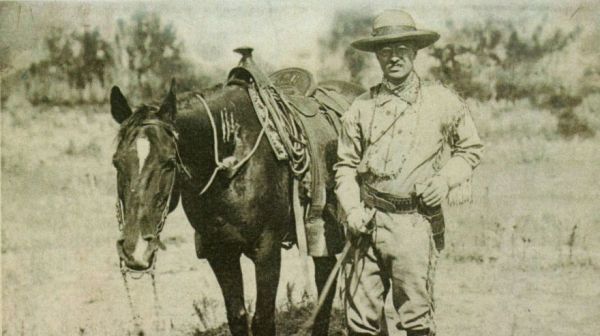 In 1886, Teddy Roosevelt, still in his twenties, boated down the Little Missouri River and stopped to hunt cougars. How like him. When he returned from his side trip (without a cougar), someone had stolen his boat. While this story so far seems like one of those movies where everything goes wrong, you have to remember this is Theodore Roosevelt, and so he took matters into his own hands.

Roosevelt and the two cowboys with him built themselves a new boat, and they piled into it and headed after the scoundrels. They sailed for three days. The makeshift vessel didn't offer a ton of shelter, and temperatures dropped to around zero. But they did have blankets, as well as enough bacon and coffee to sustain themselves, and really, that's all a man needs.

Build another boat, just like that. Roosevelt and his companions caught up with the boat thieves, and that's where the tale gets exciting. The future president actually took photographs! Read the rest of Roosevelt's adventure, and other stories like the time Abraham Lincoln was distracted from the Civil War by three motherless kittens, and how Peter the Great started his reign sharing the throne with his brother, in 5 Ridiculous Side Stories Starring Famous Historical Figures at Cracked.