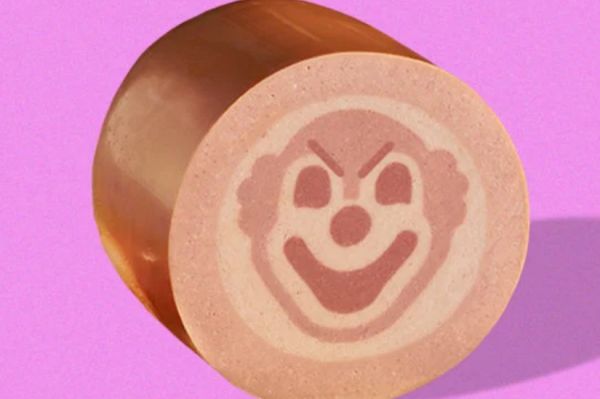 Some folks think that viral images of bologna sporting a clown face is a Photoshopped joke. No, it’s very real, and if you grew up in the British Isles, you might have fond memories of eating Billy Roll.

“As I remember, the eyes popped out, leaving perfect circles, and the mouth could come out with a bit more dexterity,” says freelance writer Donna Bloss, who grew up in Cork, Ireland. “It’s like perforated paper — easily tearable.”

“Once the eyes and mouth were removed and graciously eaten, came the spectacle: Billy Roll is now my face,” Bloss continues. And after putting the meat clown’s gaping eye and mouth holes over her own, she’d eat whatever remained of the buttery deli meat “with utmost pleasure.” “It was my favorite school lunch. If my mom came home and there were Billy Rolls in the shopping, I was very excited,” she tells me. “I remember opening my sandwich at lunch, bread having become stuck to the meat with the butter, and wanting to pick at the face.”

Mel magazine looks into where the meat clown came from and how it has enticed children since 1986. -via Metafilter