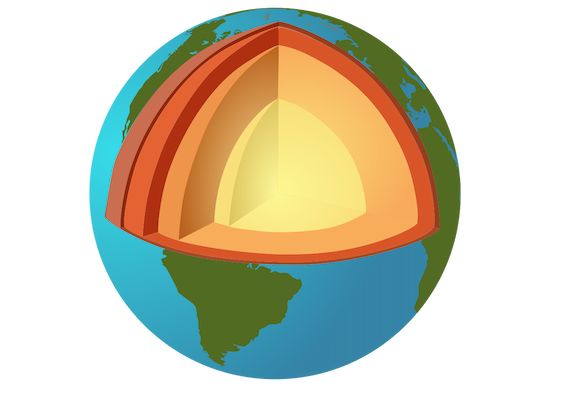 In elementary school, we learned that the earth is made up of layers: the crust, the mantle, and the core. If you asked the teacher how we know all that, she'd get frustrated and tell you we know because it's in the textbook. At least that was my experience. But what we learned back then is just a small fraction of what scientists know about the earth beneath us.

There are four main layers to the Earth: crust, mantle, outer core and inner core, along with transition zones between these layers. The world we know lies on tectonic plates making up the Earth’s crust, which varies in thickness from three miles to over 40. Beneath the crust lies the mantle, the layer of rock making up 84 percent of the Earth’s volume. The rocks in the upper mantle are white-hot, but if you could cool them to room temperature, they’d be a speckly olive green thanks to the mineral olivine — you might know it as the August birthstone peridot. “I think the mid-upper mantle would be gorgeous, because it would be olivine green, like 60 percent, and it would also have garnets, these beautiful red cubic minerals,” says Wendy Mao, a mineral physicist at Stanford University.

Deeper in the mantle, heat and pressure reconfigure the atoms making up olivine into two new minerals, bridgmanite and ferropericlase, which are brownish-orange and yellow at room temperature. Beneath the rocky mantle, there’s an outer core of churning liquid iron (and a little nickel) surrounding an inner core of solid iron (again with some nickel) that’s about 70 percent the size of the moon. The center of the Earth is almost as hot as the surface of the Sun, about 9,800 degrees Fahrenheit, with pressure that makes the compressive forces at the ocean floor look like child’s play.

But we haven’t been to any of these places inside the Earth. We haven’t seen them. We haven’t sent cameras or probes to bring back samples of iron glowing like coal embers. So, how do we know what’s there?

The data we have comes from several types of research, but more importantly, how those different types of research work together. Read more about studying the world below that we can't directly observe at Discover magazine.  -via Damn Interesting