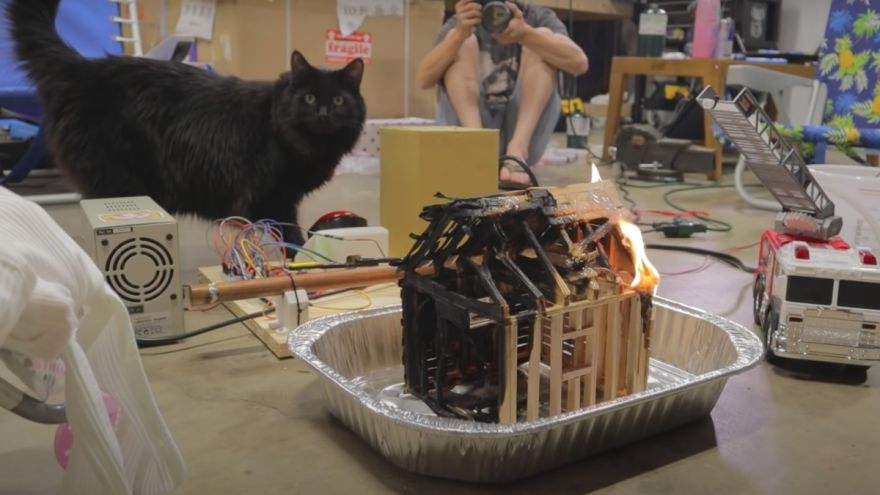 Would you trust your life to a cat? I mean, cats are expendable, and can probably get to you faster than any human. I’d trust a cat with my life. It seems that there’s a possibility of cats becoming trained firefighters! YouTuber and mechanical engineer William Osman has turned his furry companion into a firefighter. The cat may not jump to a burning building, but it can push a button to save people, as Nerdist details:

Osman decided to train the cat to put out fires as part of a laser-baby build inspired by The Boys. But while the baby build is entertaining, what’s really fascinating here is the cat training. Because, yes, cat training is just as unreliable—and semi-futile—as one would expect.

Despite the difficulties of training Jimmy Neutron the cat, Osman eventually trained him to press a button And all it took is a contraption with numerous moving pieces powered by servo motors; including a treat dispenser, a clickable button, and, to use Osman’s term, a “flame system.”

Toward the end of the video (around minute 13), Osman placed the cat near a tiny wooden house. Osman then lit the house on fire and waited for his cat to press the button—and thusly douse the flaming house with a spit of water from a tiny fire truck. And while it took the feline a while to screw its courage to the scratching post, it eventually put out the fire.

My cat would probably have started the fire.
Abusive comment hidden. (Show it anyway.)
Login to comment.