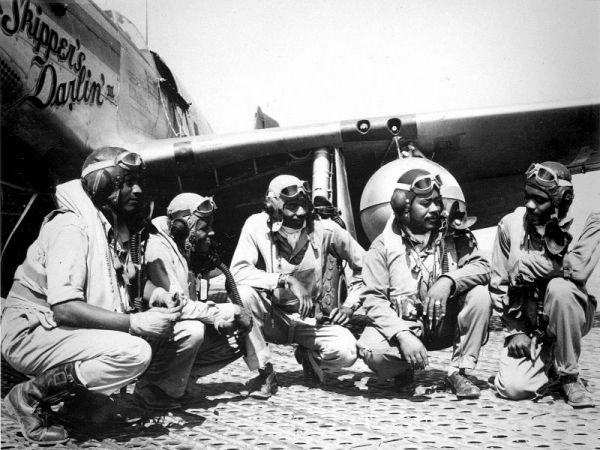 The 332nd Fighter Group of the U.S. Fifteenth Air Force in World War II are better known now as the Tuskegee Airmen. As bombers flew over Nazi Germany, they wanted the best escorts to protect them, and that meant the Tuskegee Airmen. The group flew 1,500 combat mission and 200 escort mission during the war, with more than 15,000 individual sorties, garnering 850 awards. Their motivation was to win the war, but it was also to prove their worth because so much was riding on their success for the folks back home.

In the late 1930s, the German army was spreading through Europe. Although the U.S. hadn’t yet declared war, thousands of Americans were signing up to fight overseas as pilots. But at the time, racist stereotypes were widespread in the U.S. military. The Armed Forces were segregated, with black servicemen often restricted to working menial labor jobs. Nowhere was this inequality more apparent than in the Army Air Corps, which didn’t just segregate black servicemen from their white counterparts, but outright excluded them.

To justify, military leaders pointed to a racist Army War College report released after the First World War. The report claimed black people were an inferior “sub-species” of human who lacked the intelligence and courage to serve in combat, especially in challenging roles like pilots.

For decades, civil rights leaders had been fighting against such prejudice, lobbying for equal treatment in the military. The pressure mounted when the U.S. started preparing for war. In 1938, anticipating the need for more pilots, the Army Air Corps began establishing flight schools at colleges all across the country, excluding black schools. However, advocates’ efforts were about to pay off. In 1940, while campaigning for his third presidential term, Franklin Delano Roosevelt promised to start the first training program for black military pilots.

The 332nd Fighter Group was an experiment with long-lasting consequences. Read how the Tuskegee Airmen approached the tough training and rough treatment at Popular Mechanics. -via Damn Interesting