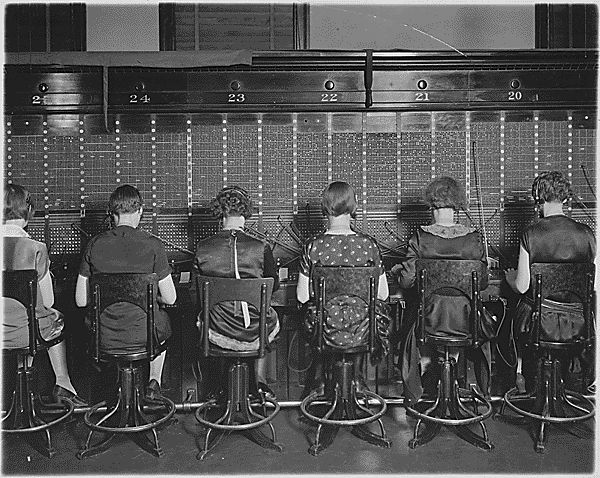 Alexander Graham Bell received a patent for the telephone in 1876, and the first automated call-switching system was introduced only 16 years later in 1892. While the phone itself was adopted rapidly, automatic switching was so slow to catch on that human telephone operators handled most calls for decades afterward. Bell Telephone wanted to keep their technology easy for the user- just pick up the phone and tell the lady what you wanted. And operators were almost always women, who were found to be more polite, more proficient, and cheaper to hire than men.

An operator did more than simply connect a customer to his or her desired number, however. In the early decades of the industry, telephone companies regarded their business less as a utility and more as a personal service. The telephone operator was central to this idea, acting as an early version of an intelligent assistant with voice recognition capabilities. She got to know her 50 to 100 assigned customers by name and knew their needs. If a party didn't answer, she would try to find him or her around town. If that didn't succeed, she took a message and called the party again later to pass the message along. She made wake-up calls and gave the time, weather, and sports scores. During crimes in progress or medical emergencies, a subscriber needed only to pick up the handset and the operator would summon the police or doctors.

Unlike other modern technologies, automatic telephone switching happened first in small towns and rural areas, then spread slowly to cities. Meanwhile, millions of women made a meager living keeping us connected. Read how that happened at Econ Focus. -via Damn Interesting

Is this the party to whom I am speaking?
Abusive comment hidden. (Show it anyway.)
Login to comment.