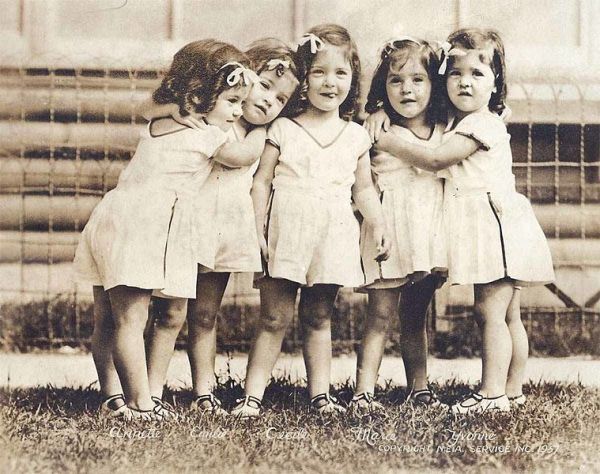 The Dionne Quintuplets were the first set of quints to all survive infancy, and the only set of identical quintuplets ever recorded. Born in 1934, before sonograms and neonatal care units, the five babies were a surprise to their mother, Elzire Dionne, who suspected she was carrying twins. They arrived two months premature at the farmhouse in rural Ontario where their parents and five older siblings lived.

Local doctor Allan Roy Dafoe, who was present for the births, did an amazing job keeping the five premature babies alive under difficult circumstances and with no access to medical equipment. He sterilized the farmhouse, kept the babies warm in a wicker basket using hot water bottles or the open oven, and recruited nurses to massage them with olive oil. Before supplies of breast milk could be organized, Dafoe ordered the babies to be fed cow’s milk, sterilized water and corn syrup, mixed with one or two drops of rum for a stimulant.

As news about the miraculous birth spread across North America, reporters and photographers poured into the small town, followed by spectators in thousands. They gathered outside the farmhouse and peeped through the windows for a glimpse of what was already becoming a freakshow. Some ridiculed the parents for creating a litter of humans. Others provided monetary assistance. One couple offered to buy the bed where the girls were born for a thousand dollars. A hospital sent two incubators.

Oliva and Elzire Dionne were desperately poor and now had ten children. They felt they had no choice but to relinquish the girls to the Red Cross for their own welfare and to keep them from being exploited. The Canadian government soon stepped in and took legal custody. They lived in a custom-built nursery that also worked as a display case, where tourists could observe the girls in their private playground. The quintuplets were not only unique but adorable as well, and were used to promote tourism and sell products. Read the story of the Dionne Quintuplets at Amusing Planet.  -via Strange Company