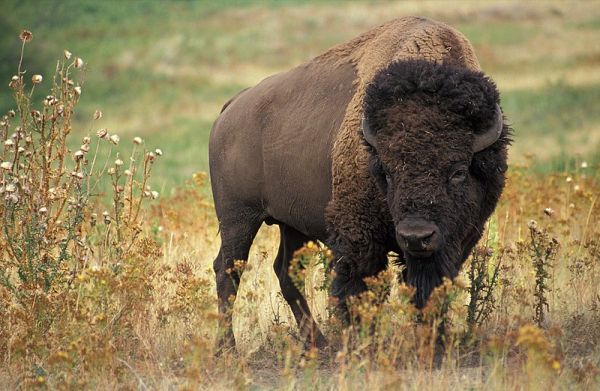 Kyler Bourgeous has hiked, biked, and run through every trail in Antelope Island State Park in Utah over his life, but 2019 was the most eventful year in his outdoor activities. In June, he ran the Frary Peak Trail and encountered a group of bison.

I was almost to the three-mile marker on the trail, where it crests this ridge—that’s when I ran into them. As soon as I saw them, I said, “Oops” out loud. Then I started walking away slowly, trying to get some distance between us. But I only made it a few steps when the bison decided to charge. I ran when I saw it coming.

It closed the gap quickly, because their top speed [up to 35 miles per hour] is so high. Right before it got me, I turned sideways into it. So I have this flashback now, where I see the bison right before it hits me, which has been a problem because the incident has caused some PTSD.

I turned into it with my right side, which ended up working as well as it could have because I didn’t suffer any permanent injuries. It hit me with both of its horns. I got one in my hip, which took out a pretty big chunk of flesh, and the other one in my arm, which took out a smaller lump. It also fractured a rib, putting a small hole in my lung, which started collapsing.

The impact sent me flying through the air. I rotated and hit the ground. The bison trampled me after that. I remember this whirlwind of hooves and getting smashed under it, which ripped my ear and scalp and bruised my back.

One might think that such an experience would discourage Bourgeous from frequenting the park, but no. Once he got out of the hospital, he was back to hiking the trails. He began dating Kayleigh Davis, who accompanied him on an outing to the park on September. This time, it was Davis who was gored. What the odds? Bourgeous and Davis tell their stories at Outside Online. -via Damn Interesting

I remember seeing some fools at Yellowstone standing next to a buffalo - posing for photos. They were lucky it did not get spooked.
Abusive comment hidden. (Show it anyway.)
Login to comment.