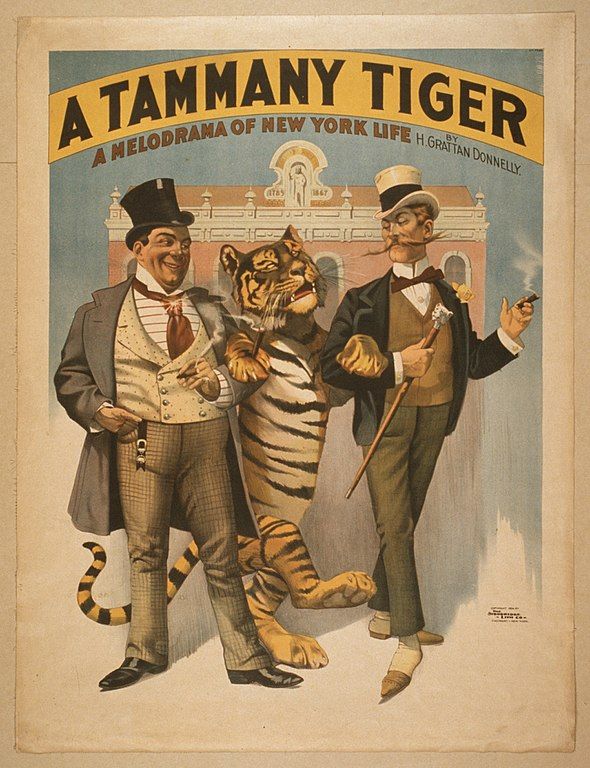 Tammany Hall was the famously corrupt political machine attached to the Democratic Party that ran New York City in the late 19th and early 20th centuries. In the election of 1898, they backed William Astor Chanler as their candidate for congress in New York's 14th district. His opponent was the incumbent Republican representative Lemuel Ely Quigg. Both campaigns had a lucky cat mascot. For Quigg, it was a black cat they named Lem who walked in and set up house at the campaign headquarters. Tammany Hall used a tiger as their symbol, and there were many cats called Tammany cats in New York. Many of them were even named Tammany, but the one that stood out was named Tiger.

Tiger was described as a beautiful and intelligent cat with “a cast-iron constitution” who had been attached to the Health Board’s chemical laboratory in the Criminal Courts Building for several years. According to The Sun, the poor cat had been “used and misused by the Health Board’s chemists in making their poison tests.” Tiger reportedly ate a lot of poisoned food that had sickened people and he had “permitted himself to be drugged on a thousand different occasions for the cause of humanity.”

According to The New York Times, Tiger was the one who “had the honor of determining the difference between morphine and atropine” during the Carlyle Harris trial, which I have written about. The two chemicals were placed upon his eyeballs to show how the different drugs affected the dilation and contraction of the pupils. Tiger didn’t seem to mind the morphine, but he did a frantic waltz movement after the atropine was applied. (History is often a hard pill to swallow.)

The unfortunately employed Tiger was known for his ability to bounce back from these experiments, and was never known to be ill until the day he heard the results of the 1898 election, which encompassed more than just the congressional race. Read the story of Tiger the laboratory cat and that of his pampered parallel Lem at The Hatching Cat.  -via Strange Company

Why not test experimental drugs on humans? There are billions of humans - perform the tests on them
Abusive comment hidden. (Show it anyway.)
Login to comment.