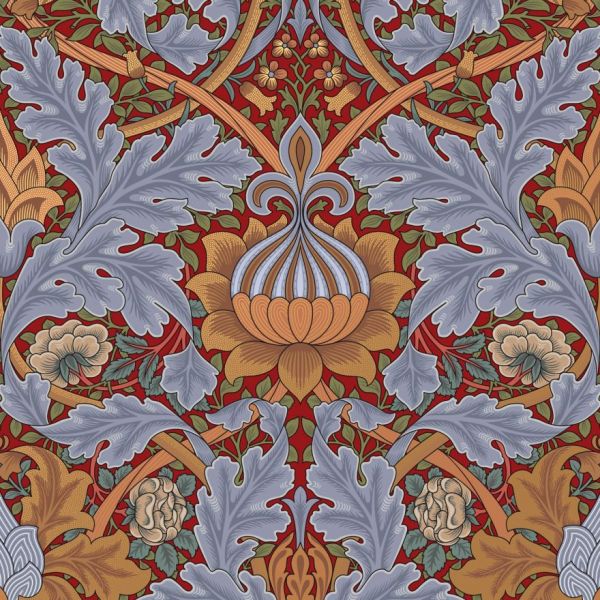 Wallpaper started out as luxurious art that covered the walls of high-class homes, just one step down from handmade tapestries. Then with the Industrial Revolution, mass-produced wallpaper brought the price down and everyone wanted to plaster their home with fancy designs. As the paper got cheaper and cheaper, design suffered until most available wallpaper was just plain ugly. The modern trend is for clean, plain, painted walls, often in light neutral colors. Wallpaper suppliers have dried up and gone out of business in droves over the past few decades. The salvation of wallpaper may be the return to high-quality hand-printed paper, like the designs supplied by Bruce Bradbury and Steve Bauer of Bradbury & Bradbury Art Wallpapers. They both developed a love for Victorian design and architecture early.

Bradbury’s first wallpapers were homages to William Morris, C. F. A. Voysey, Christopher Dresser, and his other Victorian-era design heroes. In the mid-1970s, there was a nascent market for such wallpapers as increasing numbers of homeowners in Victorian-rich cities like San Francisco were restoring these grand, old structures, which were threatened by both decay and scorched-earth urban renewal. Unwittingly, Bradbury was making the right product in the right place at the right time. “When I finally decided to become a Victorian wallpaper maker in 1976,” he says, “I realized that the walls and ceilings of the Haight and the Western Addition homes I had been seeing since 1967 were blank canvases, ready and waiting for us.” Which is not to say he was immediately successful. “It still hadn’t occurred to me to sell anything,” Bradbury recalls, “because I was so in love with what I was doing. I made it and gave it away.”

He eventually got over that, which saved the business. Bradbury and Bauer tell us about their distinctive wallpapers, and give us a history of wall coverings at Collectors Weekly.