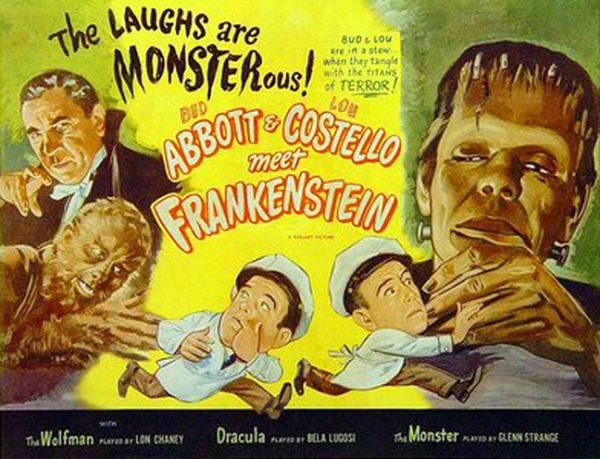 Lou Costello wasn't exactly thrilled when he read the movie's original screenplay. "No way I'll do that crap," he complained, "My little girl could write something better than this." A $50,000.00 advance in his salary, plus the inclusion of  Charles Barton, who Bud and Lou both loved, as the film's director, helped change Lou's mind. (Bud and Lou were to be paid a final salary of $105,000). 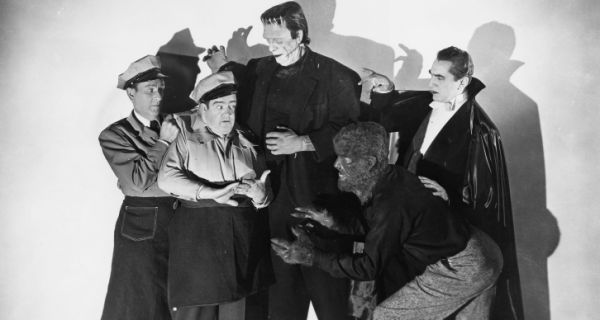 Actually, Bud and Lou not only meet Frankenstein in this film, but Dracula, the Wolf Man and the Invisible Man (albeit briefly). About the only classic Universal monster they don't meet in this movie is the Creature from the Black Lagoon. The creature wouldn't come along until 1954. The boys would never meet the slimy gill-man in a feature film, but they would encounter him in one of their television appearances on The Colgate Comedy Hour in 1954.

Oddly, Boris Karloff was never approached to play his signature role as Frankenstein. Instead, Glenn Strange took on the title role. Karloff, however, did do publicity for the film and posed in publicity photos (including a shot of him buying a ticket at the box office). Karloff was to work with Bud and Lou soon enough, as the next year, he would headline Abbott and Costello Meet the Killer, Boris Karloff. He'd return to also co-star in Abbott and Costello Meet Dr. Jekyll and Mr. Hyde in 1953. 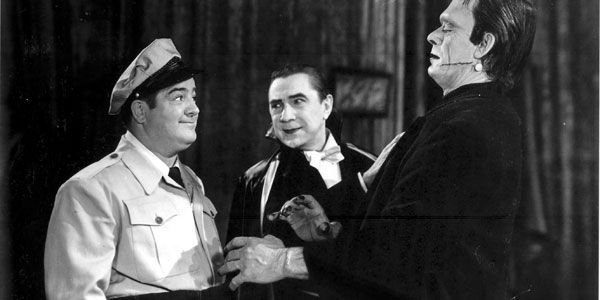 The studio (Universal-International) originally did not want Bela Lugosi to play Dracula. Ian Keith was considered for the role. Keith had also been up for the role of the vampire Count in the original Dracula in 1931, losing the lead to Lugosi. But, according to film historian Gregory W. Mank, Lugosi's manager met with the head of Universal and said (rather dramatically), "He is Dracula. You owe this role to Lugosi.

This was to be the second and final time Bela Lugosi was to play his most famous role as count Dracula in a feature film. Many movie fans mistakenly believe Bela played the count in many films, but this is untrue. The confusion derives from the fact that Lugosi did play vampires in several other movies, including Mark of the Vampire (1935) and Return of the Vampire (1943). He did play Dracula in a short, 1933's Hollywood Parade. It was also, sadly, to be Bela's last film made with a major studio. The rest of his career was to consist of various appearances in B-movies like Bela Lugosi Meets a Brooklyn Gorilla (1952) and the legendary turkey Plan 9 from Outer Space (1959).

Lon Chaney Jr. took on the Wolf Man role, and that of his alter ego Larry Talbot. One of the film's biggest laughs comes from an encounter between Costello and the tortured Talbot (Chaney).

Talbot: "Every night, when the moon comes out, I turn into a wolf."

Costello: "Yeah, you and 20 million other guys."

Lenore Aubert and Jane Randolph would play the requisite female love interests, with Aubert being the vampire femme fatale. Vincent Price had an uncredited bit at the film's conclusion, playing the voice of the Invisible Man. 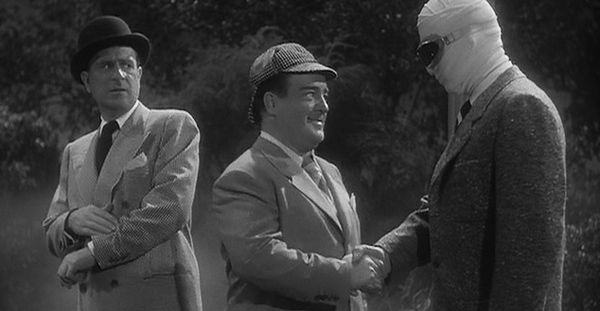 During the film's production, one of the hardest things for Glenn Strange to do was keep a straight face. The necessary deadpan of Frankenstein was hard for him to sustain because of Lou Costello's constant funny ad-libs and reactions on different takes. This becomes especially obvious in the scene where Lou is sitting on his lap, when we can easily see Strange trying desperately to keep from breaking up. 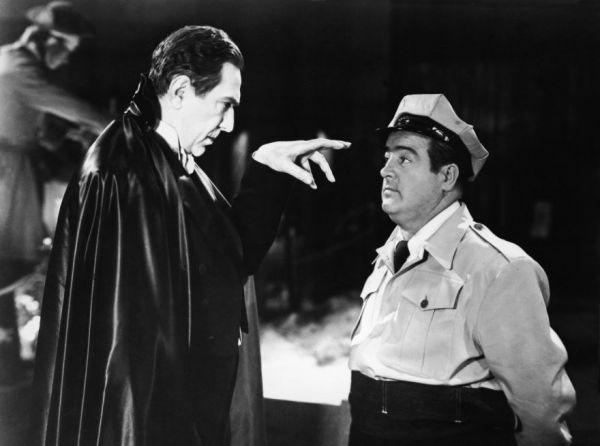 Bobby Barber, a pal of Lou Costello, was around in his usual role as "court jester." Bobby had a bit part in the film, but his main role was to keep Lou and the others amused with his on-the-set antics. Bela Lugosi was amused by Bobby's monkey business until it involved him.

In the scene where Dracula (Bela) descends the stairs dramatically with cape pulled over his face, Barber walked behind Lugosi, mimicking his slow vampire gait. The rest of the cast and crew broke up, but Bela was furious. "We should not be playing while we are working," he said, and stormed off the set.

Pie fights between takes occurred frequently during production. But Bud and Lou were careful not include the three monsters in the horseplay, making sure the actors and their costumes were safe and protected from any pie missiles. 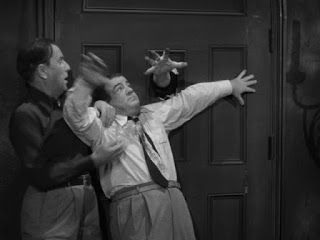 An unexpected "good" take occurred in the scene where Frankenstein (Strange) punches through the door Bud and Lou are hiding behind. The punch clipped Lou (who had deliberately moved from his mark on the set) and smashed him right in the jaw. But director Barton liked Lou's reaction, and the unplanned  punch was kept in the film's final cut.

In another scene, Strange, as Frankenstein, throws Lenore Aubert through a window. Strange lost his footing in this bit and fractured his ankle, tripping over a cable wire. With Strange temporarily incapacitated, Lon Chaney Jr. took off his Wolf Man make-up and instead got decked out as Frankenstein, to play one scene while Strange recovered from his injury. Thus, a classic bar bet came to pass (the answer being Lon Chaney Jr.): "Who is the only actor to play both Frankenstein and the Wolf Man in the same movie?"

Production wrapped in late March. The film's original planned production cost was $759,000, but it ran some $33,000 over budget.

Abbott and Costello Meet Frankenstein premiered on June 15, 1948. The film exceeded everyone's wildest expectations and proved to be a box office smash. It had been Universal-International's cheapest movie of 1948 and ended up being the studio's second-highest grossing film of the year. Made for less than $800,000, the film raked in $3.2 million at the box office, a gargantuan total for 1948. 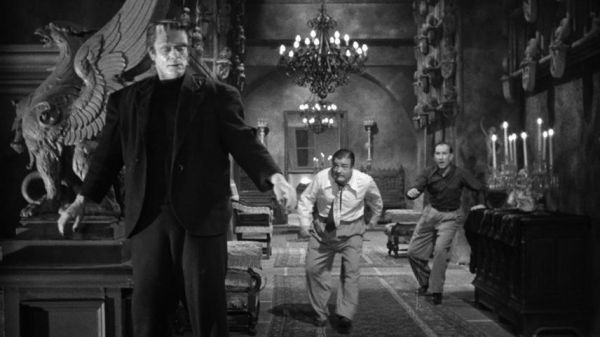 Abbott and Costello Meet Frankenstein was to have other, lasting effects. In 2000, it made the American film institute's list of 100 Funniest American Movies, coming in at number 56. In 2001, it was selected by the Library of Congress, who deemed it "culturally, historically or aesthetically significant" and selected it for inclusion in the National Film Registry. And in 2007, Reader's Digest named it one of the "100 Funnest Films of All-Time."

Abbott and Costello Meet Frankenstein was the first film Elvis Presley, a lifetime movie lover, ever saw. Quentin Tarantino credits the movie with helping him learn how to blend genres. A little boy by the name of Jerry Garcia was terrified by the movie when he first saw it as a boy, but he grew to love and be fascinated by it. Garcia said Abbott and Costello Meet Frankenstein helped influence him to become not only a musician, but a filmmaker and artist too.

Very very interesting article! I, like many other folks my generation, grew up on all these 'monster' movies and their comedy tie-ins. Every kid pretended to be Frankenstein, Dracula or the Wolfman at some point... with their friends, around their brothers or sisters, on the playground at school or dressed at Halloween.

It's funny that Eddie mentioned Bela Lugosi appeared later in the movie "Bela Lugosi Meets a Brooklyn Gorilla" (1952). That film starred two actors (Duke Mitchell and Sammy Petrillo) who looked and sounded a lot like Dean Martin and Jerry Lewis. At the time they were capitalizing on the fame of Martin and Lewis (Jerry was reported as wanting to sue them). The strange connection is that Martin and Lewis were friends with Abbott and Costello. It was Lou Costello who paid for Dean Martin's nose job when they were starting off in the business. Funny how paths cross.

.
Abusive comment hidden. (Show it anyway.)
By far the best Abbott and Costello movie of all time. It was refreshing as a kid to actually laugh at the same monsters that scared the crap out of me. I own the DVD and also have it on my VuDu account online. Best scene to me was early in the movie in the wax museum with Lugosi opening his coffin. CLASSIC!!