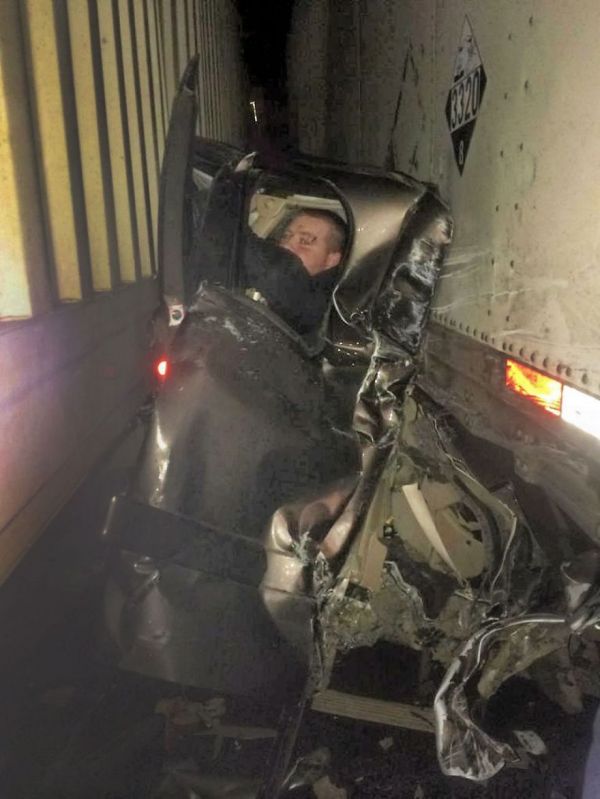 And the driver is fine. Despite his Chevy Silverado being crushed to the size of a go-cart, Kaleb Whitby only received a few cuts and bruises in the I-84 accident near Baker City, Oregon.

More than 100 people were involved in the Saturday morning pileup on Interstate 84, about 33 miles east of Baker City. At least three separate collisions involving more than 20 vehicles, most of them semi-trucks, injured a dozen people.

Black ice conditions led to the multiple accidents. In Whitby’s collision, a tractor-trailer jackknifed across the highway. Whitby slid into the truck. Another tractor-trailer saw the first truck and slid sideways into it, crushing Whitby’s pickup. After ascertaining that Whitby was alive and not seriously injured, the second truck driver, Sergi Karplyuk, asked if he could take a picture. Emergency services freed Whitby a half-hour later. He and Karplyuk joined other bystanders to help other injured people. Whitby was checked out at a hospital later and came home with two band-aids on his finger. You can read the details, and see more pictures, at Oregon Live. -via reddit

Favorite quote from the article:

"Thank God that I'm still alive," Whitby said. "Now I've got to go figure out why."