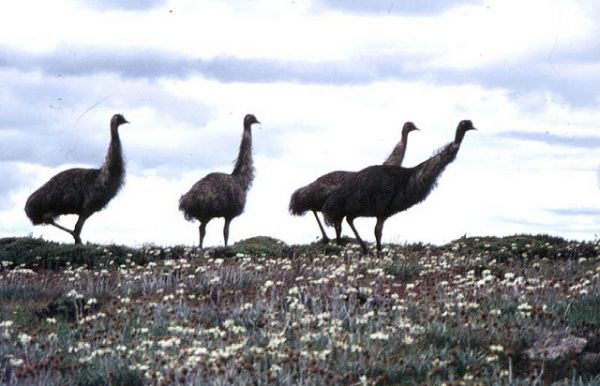 In Australia, emus are a protected species, but they are not endangered. For a while they lost that protected status, when they threatened the grain farms of World War I veterans in Western Australia. The big birds can destroy a crop in no time, and 20,000 of them were quite a threat. In November of 1932, the military was called up to take action against the emus. Author Murray Johnson tells us how that mission went.

“On 8 November, it was reported that Major Meredith’s party had used 2,500 rounds of ammunition – twenty-five per cent of the allotted total – to destroy 200 emus,” says Johnson. “When one New South Wales state Labor politician enquired whether ‘a medal was to be struck for those taking part in this war’, his federal counterpart in Western Australia, responded that they should rightly go to the emus who ‘have won every round so far’.”

Yes, the army was no match for the flocks of flightless birds. But they pressed on, with another campaign later that month. Read about the emu’s tactical strategy and the outcome of the Great Emu War at Scientific American. -via Not Exactly Rocket Science