The following is an article from Uncle John's Unstoppable Bathroom Reader. 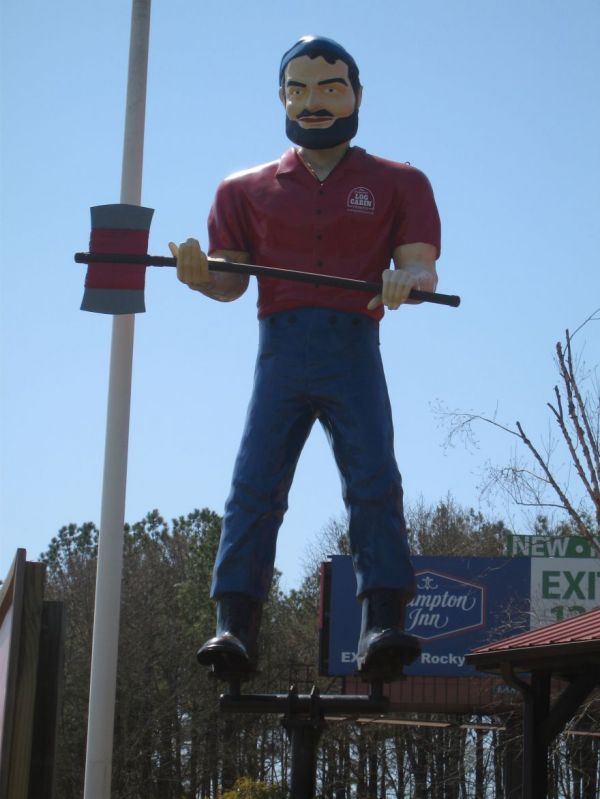 Back in the early 1960s, little Uncle John saw a giant statue of Paul Bunyan at Freedomland USA, an amusement park outside New York City. Freedomland closed in 1964, but the Paul Bunyan statue is still around -standing behind a gas station in nearby Elsmford, New York. And it turns out, there are a lot more Paul Bunyans around the country …if you know where to find them.

If you’ve taken a lot of car trips, you’ve seen them— 18- to 25-foot figures of dark-haired, square-jawed men in a short sleeved shirt and work pants. Their arms are extended at the elbow, with the right hand facing up and the left hand facing down, often holding something, like a muffler or a roll of carpet.

What you might not know is that there are more than 150 of these gigantic fiberglass figures dotting America’s highways, advertising everything from tires to burger joints to amusement parks. Almost all of them were made by one man.

BIRTH OF THE BIG BOYS 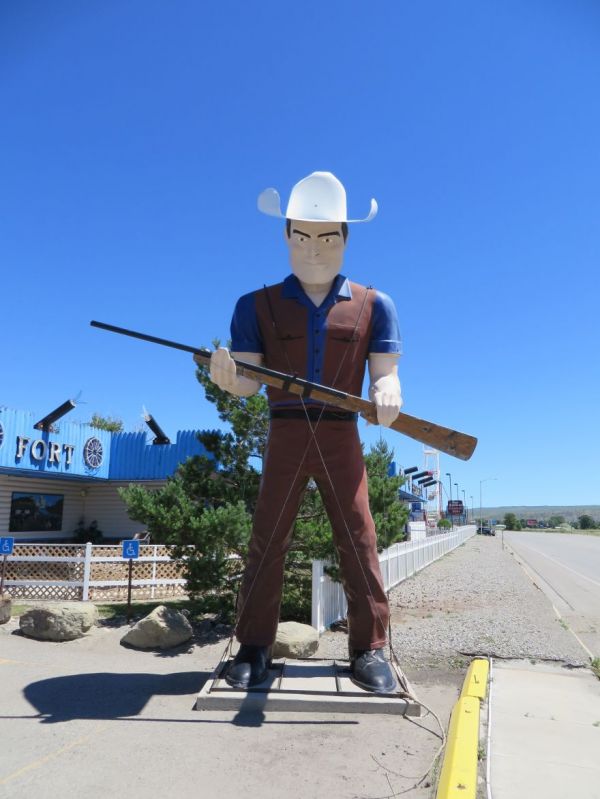 It all started in 1962, when the Paul Bunyan Cafe on Route 66 in Flagstaff, Arizona, wanted a statue of their namesake to stand beside the highway and attract hungry motorists. Prewitt Fiberglass in Venice, California, was happy to supply a figure of the giant lumberjack and created a molded Paul Bunyan character wearing a green cap, dark beard, a red shirt, and jeans, and holding an axe.

That was it as far as Prewitt Fiberglass was concerned -one customer, one Paul Bunyan. But then owner Bob Prewitt decided to sell his business to a fiberglass boat builder named Steve Dashew. Dashew renamed the company International Fiberglass and, wanting to make a success of the new venture, started looking for business opportunities. The leftover Paul Bunyan mold caught his eye. It was such an odd asset, he thought it might have value. Dashew began calling retail businesses around the country and asking them if they could use a giant advertising figure. A few said they could. When a story about one of Dashew’s customers appeared in a retail trade magazine, stating that sales had doubled after the Paul Bunyan went up, business in the giant fiberglass figures began to boom.

Dashew started to aggressively market the big statues across the country and sold them by the score. At first they were all Paul Bunyans, but Dashew soon discovered he could modify the basic mold slightly to create other figures. 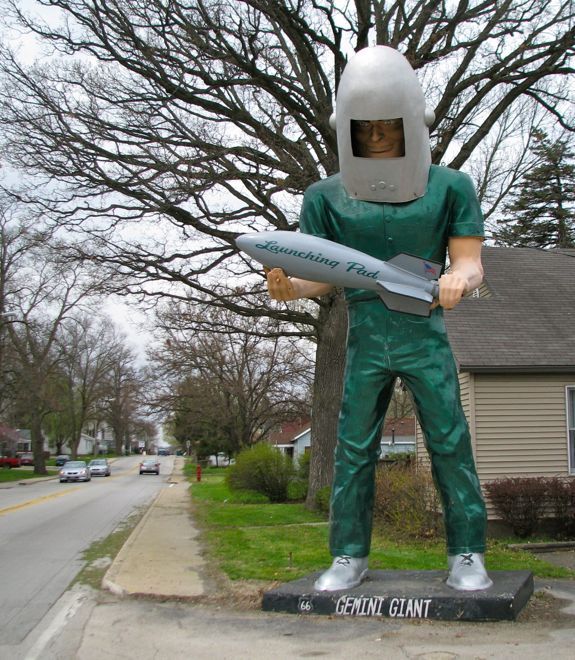 * He turned them into cowboys, Indians, and astronauts. All of the figures had the same arm configuration as the first Paul Bunyan, so they were almost always holding something, like a plate or some tires.

* International Fiberglass made other figures, too -such as giant chickens, dinosaurs, and tigers- selling each for $1,800 to $2,800.

* They made 300 “Big Friends” for Texaco, figures of smiling Texaco service attendants in green uniforms with green caps. 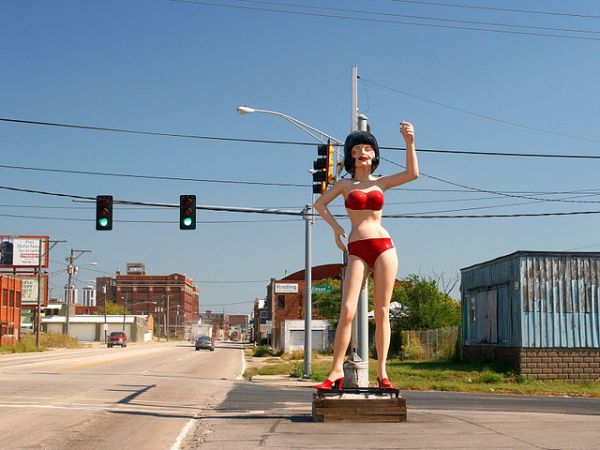 * To advertise Uniroyal Tires, they made a series of hulking women who looked a lot like Jackie Kennedy, holding a tire in one of her upraised hands. These women were issued with a dress, which could be removed to reveal a bikini.

But the figures made from the original Paul Bunyan mold proved to be the most popular, not to mention the most cost-effective for Dashew, who used the same mold over and over again. By the mid 1960s, the figures had made their way into hundreds of towns across the United States and were great attention-getters for retail stores and restaurants of all kinds.

But by the 1970s, the big figures that seemed so impressive years earlier were getting dingy, weather-beaten, and silly looking to the next generation of consumers. As the sales of the statues slowed, Dashew concentrated his energies on other business ventures. In 1976 he sold the business and the Paul Bunyan mold was destroyed. 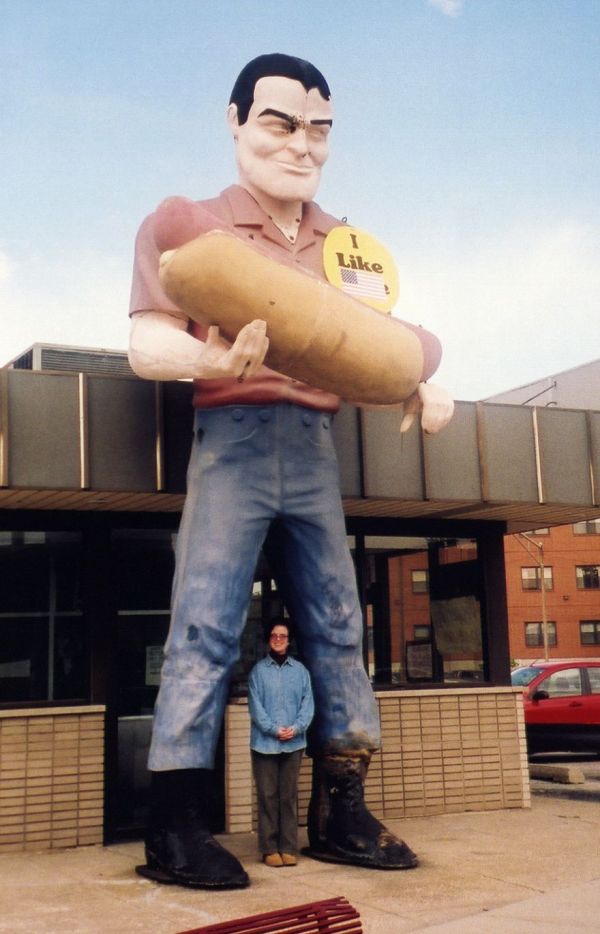 Today, most of the fiberglass colossi are also gone, having been destroyed, removed, or beaten down by the elements. But they haven’t all disappeared. In fact, almost every state of the Union has at least one. With businesses changing hands, the figures have been modified over the years.

* One Bunyan in Malibu, California, used to hold an immense hamburger. When a Mexican food joint bought out the burger place, he was given a sombrero and a serape, and his hamburger was replaced with a taco.

* A Bunyan at Lynch’s Super Station in Havre de Grace, Maryland, was dressed in desert fatigues in 1991 to show support for the Gulf War.

* Another Uniroyal Gal, in Rocky Mount, North Carolina, has been dressed in a pair of Daisy Duke shorts, given a beach ball to hold, fitted with a queen-size stainless steel belly button ring, and placed in front of the Men’s Night Out “private club.”

BIG MEN IN THE MEDIA

If you can’t get to see one of the giant statues in person, you can look for them in movies and on TV:

* A Paul Bunyan was featured in the 1969 movie Easy Rider. 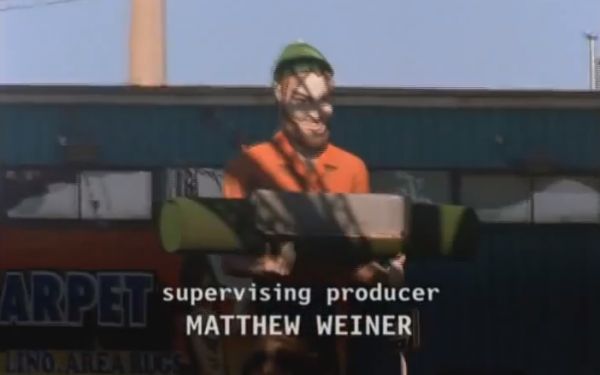 * A modified Bunyan is pictured in the opening credits of the TV show The Sopranos. The figure, which holds a giant roll of carpet to advertise Wilson’s Carpet in Jersey City, New Jersey, is now a stop on the New Jersey Sopranos bus tour.

* Bunyans have also made appearances in the TV show The A-Team, in the 2000 John Travolta flick Battlefield Earth, and in commercials for Saturn cars and Kleenex Tissues. 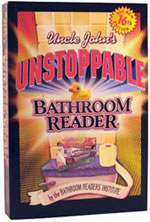 The article above was reprinted with permission from Uncle John's Unstoppable Bathroom Reader.

L.P. Anderson Tire Factory in Billings, MT. Has one holding a tire.