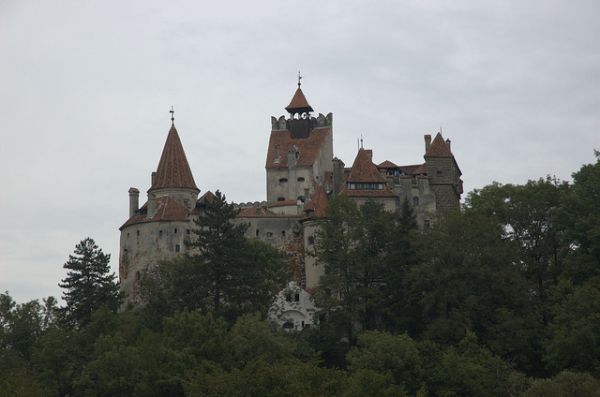 Now's your chance to buy a stake in Dracula's castle! Bran Castle in Romania, which has existed in various forms since the Thirteenth Century, is for sale. Prince Vlad the Impaler (1431-c.1476), the source of the Dracula legend, was imprisoned there for two months.

Much later, Bran Castle was the property of the Romanian royal family. In 1948, the royal family was stripped of its property and driven out of the country. After the collapse of the Ceausescu regime, Romania returned the castle to members of the royal family. Those three property holders are now elderly and would like to turn Bran Castle over to someone else. Mark Meyer, a representative of the sellers, described the possible future of the castle:

“Archduke Dominic and his family care very much for the castle, and it’s in far better shape now than it was when run by the government,” says Meyer. “The aim, though, is to take the whole thing a stage further, re-route the road and make Bran a destination, the kind of place people will stay for two or three days.”

There’s enough land to build a small hotel, he adds. “And we’re also installing a glass elevator that will lead to a tunnel in the mountain, with a light show featuring Dracula and the whole history of the place.

“That’s why we’d like whoever buys the castle to continue running it as a tourist destination. This isn’t just a national monument, it’s the largest and most significant attraction in Romania.”

-via Ace of Spades HQ

Hey, I think I saw one of those medieval potties in Game of Thrones tonight!
Abusive comment hidden. (Show it anyway.)
That's what all those little windows are for!