The following is an article from the book Uncle John's Bathroom Reader Salutes the Armed Forces.

They weren't really lost, but a series of command failures and tactical errors kept them trapped for days while the whole world wondered what would happen to them.

THE CAMPAIGN TO END ALL WARS

The final campaign of World War I was set for H-hour, 5:30AM on October 4, 1918. General John J. "Black Jack" Pershing, commanding the U.S. Expeditionary Force in Europe, had ordered the left wing of the U.S. 1st Army to push forward into the Argonne Forest on September 29. German artillery hidden in the forest had been clobbering American and French forces, and Pershing wanted the guns silenced before the massive Allied advance. Major General Robert Alexander's 77th Infantry Division drew the assignment; his orders were to push forward "without regard to losses." 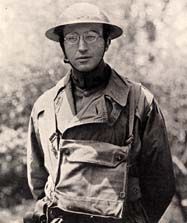 The Argonne was different from other battlefields. A few trails meandered through the woods, but the enormous size of the forest and the density of the trees made it difficult to organize cooperative action among units, some of which quickly became separated. Brigadier General Evan Johnson, commanding the 154th Brigade, made it clear to the battalions under his command that "Any ground gained must be held... If I find anybody ordering a withdrawal from ground once held, I will see he leaves the service," meaning dishonorably. Major Charles W. Whittlesey's 1st Battalion of the 308th Infantry Regiment was part of Johnson's brigade and received the same message.

Whittlesey's composite battalion consisted of Companies A, B, C, E, G, and H from the 308th Infantry, Companies C and D from the 306th Machine Gun Battalion, and Company K from the 307th Infantry, which accidentally joined them later. All the companies were depleted from earlier losses when they entered the Argonne Forest. Whittlesey had been told not to worry about safeguarding his flanks because an American battalion with the French infantry would be on his left and two American battalions would be on his right. On October 2, he and his roughly 670 men plunged into the foggy, rain-drenched Argonne Forest, lost contact with the units on his flanks, but kept pressing forward.

By accident, Whittlesey's battalion found a gap in the German line, but lost about 90 men before resistance subsided. With nightfall approaching, Whittlesey moved the battalion in to a ravine that ran along the side of a steep and rocky slope about 300 yards long and 60 yards wide with good defensive ground and protection from mortar fire. Whittlesey then waited through the night for the other units to make contact. 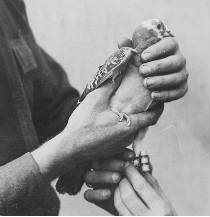 The other units never arrived, and on the morning of October 3, German mortars opened fire. Whittlesey sent 50 men back through the forest to find General Alexander and wait for reinforcements. An hour later, 18 men returned and said they had been ambushed about a mile away. They also reported a more serious problem. The Germans had strung wire defenses between their battalion and the 77th Division -they were trapped. Whittlesey's only communication system was carrier pigeons; he handed a message to Private Omar Richards, the pigeon keeper, who sent the first of six birds off to division headquarters to report the battalion's position and to request reinforcements and supplies. They wouldn't know for hours if the message had reached headquarters. 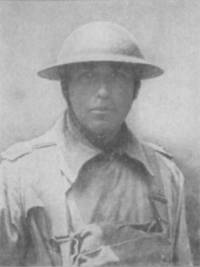 Meanwhile, the men were hungry and thirsty. To reach water, they had to crawl 50 yards to a stream running along the base of the ravine -but the stream was covered by a German machine gun. Too many men had been hit trying to reach it, so Whittlesey posted guards with orders to shoot anyone attempting to fill their canteens.

During a mortar barrage, both Whittlesey and Captain George G. McMurtry had been hit by shrapnel. McMurtry's knee began to fester, but both officers continued to hobble among the men, stopping at each foxhole to assure the men that help was on the way. The men knew their major would never surrender. Newspaper correspondents hanging around headquarters learned about the trapped unit and started writing daily accounts about the "Lost Battalion."

On the morning of October 4, a mortar bombardment and firefight did more damage. The major sent a second pigeon, again asking for help and reporting 222 casualties, with 82 men dead. His machine gun crews were decimated -only five were left with little ammunition, and the medics were running out of bandages. General Alexander detached two companies, but they were stopped by the enemy and turned back after losing more than half their men.

"FOR HEAVEN'S SAKE, STOP IT" 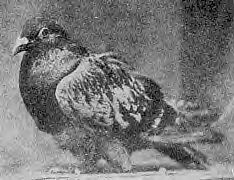 October 5 opened with another German mortar attack on the remaining machine gun positions. Whittlesey sent another pigeon requesting artillery support -but with the wrong coordinates. American artillery opened at 1:15PM, and for four hours shells rained down on the Lost Battalion instead of the Germans. There were only two pigeons left, but when Private Richards opened the cage, one escaped. The other, Cher Ami, carried this brief message from the major: "Our own artillery is dropping a barrage directly on us. For heaven's sake, stop it!" The pigeon flew to a nearby tree and settled on a branch. When throwing stones failed to dislodge the bird, Richards dodged howling artillery shells, climbed the tree, and shook the branch until the pigeon flew off and disappeared. No one expected much to come of it, but Cher Ami reached division headquarters at 4:00PM, with one leg and one eye missing.

THINGS COULDN'T GET WORSE, COULD THEY?

Finally, on October 6, artillery fire began to fall on the Germans, taking pressure off Whittlesey's battered men. Germans still lurked around the perimeter but were too busy to attack. New enemies intruded on morale- hunger, thirst, cold, battle fatigue, and the stench of putrefying corpses. With all the pigeons gone, Private Richards ate the birdseed.

Later in a the day, a reconnaissance plane spotted the battalion and reported its position. An hour later, planes from the 50th Aero Squadron dropped supplies, dehydrated soups, and ammunition, all which landed on the Germans. Whittlesey's men heard the enemy rejoicing over the bungled airdrop. Nine desperate men from the battalion were captured trying to rescue the parcels. 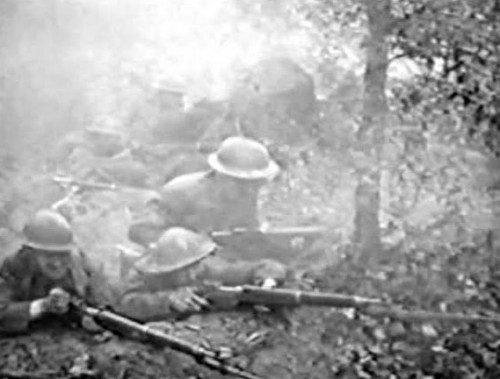 On the morning of October 7, Private Lowell B. Hollingsworth lay in his foxhole with a slight wound, weak with hunger, and feeling hopeless. When told that Whittlesey wanted eight volunteers to infiltrate through the German lines to contact nearby friendly forces who were searching for the battalion, Hollingsworth knew it could be his last chance to find food. Seven more volunteers stepped forward, including Private Carl Rainwater, a full-blooded Indian from Montana, who the volunteers chose as their guide and leader. The eight men worked silently through the forest, stopping frequently to let the wounded rest. After less than a mile, Rainwater halted and raised his hand for the others to stop. A machine gun opened fire, and Hollingsworth fell unconscious. When he came to, there was a German gun pointed at his head. Four of his buddies were dead and the other three wounded.

Hollingsworth was taken prisoner and fed, then the Germans returned him to his battalion with a note encouraging Major Whittlesey to surrender. Whittlesey read the note but didn't reply. When the men learned of the contents of the message, they shouted rude things in German back across the lines.

Early in the evening, elements from the 77th Division broke through the German lines and located the Lost Battalion. Of Whittlesey's original 600 men, only 191 were able to walk. Five men from the battalion received the Medal of Honor, including Whittlesey and McMurtry, and 26 men were awarded the Distinguished Service Medal.

The carrier pigeon, Cher Ami, was awarded the French Croix de Guerre for heroic services delivering 12 important messages to his headquarters in Verdun. His stuffed body is on display in the National Museum of American History at the Smithsonian Institution in Washington, D.C.