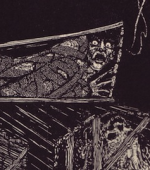 Atlas Obscura continues with their 31 Days of Halloween, featuring a new and gruesome post every day about the world's ghosts, goblins, legends, and death rituals. This post deals with the widespread fear of being buried alive, whether by mistake or by evil intent. That fear has a long history.

Being buried alive is a fear that has been with humanity for a long, long time. As early as the Greeks one can find stories of people being prematurely pronounced dead and accidentally burned alive on their funeral pyres. At various moments throughout history, this fear, this Taphephobia, has actively gripped the Western mind. The terror wasn't without it's basis in reality. One circumstance in which live burials are thought to have often taken place were during outbreaks of disease such as the black plague. Due to the rapid spread of the disease victims were buried almost immediately after death, and sometimes beforehand. These circumstances would repeat themselves again with the cholera outbreaks throughout Europe. Throughout the enlightenment, doctors were learning more about the human body and death. As they learned to revive people who were previously considered dead (such as drowning victims via the recently invented mouth to mouth resuscitation) doctors began to question if all the people they were burying had truly been dead. With increasing reports of premature burial, by the late 1700s the fear of being buried alive had fully taken hold of the Western mind.

And then folks dreamed up many ways to avoid this horrific fate, which you can read about. Link (Image credit: Illustrator Harry Clarke)

If I am repeating some info I apologize. I did not read the list.

This item was one I remember because my grandmother was terrified of being buried alive: Saved by the bell. That's where they tied a string to the body that was placed in the coffin. At the other end of the string was a bell. If 'the body' woke up and found it had been buried alive the bell would start ringing and hopefully give people enough time to dig the person up before they suffocated.

My grandmother insisted that someone make 'damn sure' she was dead before she was buried by putting a mirror up to her face to see if it fogged up.
Abusive comment hidden. (Show it anyway.)
Login to comment.