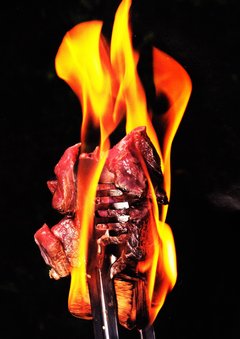 Want to know how a bunch of brawny apes evolved into brainy humans? It all comes down to a pair of tongs and a flame.

People and animals eat basically the same food; the only difference is that we cook our meals. But does the ability to flame-broil a burger and burn a meal really make us that special? According to Harvard anthropology professor Richard Wrangham, it does.

Armed with mounting evidence, Wrangham believes that fire-kissed foods are what separated man from beast, allowing our ancestors to grow bigger brains and evolve into the intelligent creatures we are today.

The story starts roughly 2 million years ago in the age of the habiline -the so-called "missing link" between humans and apes. Habilines walked upright, made primitive stone tools, and had brains the size of oranges (roughly half the size of our brains today). Like chimpanzees, they subsisted mainly on fruits and veggies, with the occasional bit of raw meat on the side. They had strong teeth to chew all that plant matter, and big guts to process all that fibrous material. For them, digestion took an extremely long time. In fact, it's believed that their bodies were constantly engaged in processing food. (Even today, chimpanzees spend more than six hours a day just chewing.)

So, how did Homo habilis evolve into Homo erectus? The dominant theory since the 1950s has been that meat-eating was responsible for the shift because it required habilines to gradually develop human intelligence. There's something to the idea: To hunt game, our apelike ancestors had to reply on more than just physical prowess; they had to be clever and cooperate. The better they got at hunting, the smarter they became.

But the "meat made humans" hypothesis rankled biologist Richard Wrangham. In his 2009 book Catching Fire, Wrangham argues that meat-eating alone cannot account for the tremendous physical changes that occurred in the evolution of humans. Instead, he believes that man's discovery of fire -and more importantly, cooking- did the heavy lifting. For decades, many scientists dismissed cooking as a pleasant byproduct of civilization, a symbol of man's dominion over nature. But Wrangham builds the case that cooking was crucial to human evolution because it made digestion so much more efficient, increasing the amount of energy our bodies derived from what we ate. As a result, humans became better able to think, hunt, sing, dance, paint on walls, and invent new tools. Ultimately, the top chefs were more likely to survive, reproduce, and pass along cooking techniques to their offspring, along with the physical evolutionary changes that come with them -namely, bigger brains.

The idea that cooked food offers more energy than uncooked food doesn't immediately make sense. After all, recent studies show that cooking can leach food of its calories and nutrients. To understand the answers, we need to look inside -literally.

Back in the early 19th century, digestion was a mysterious process. But all that changed in 1822, when a 28-year-old Canadian soldier named Alexis St. Martin was accidentally shot in the belly, leaving portions of his lungs and stomach exposed. Thanks to the quick-thinking work of U.S. Army surgeon William Beaumont, the blast didn't kill St. Martin. However, it did leave him with a fist-sized hole in his stomach that never closed. Immediately, Dr. Beaumont spotted an opportunity; it was a chance to observe human digestion as it happened. 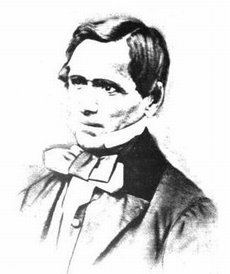 Beaumont began introducing foods directly into St. Martin' stomach and watched what happened. He observed the young man digest cooked lean beef; raw, salted beef; raw cabbage, soup, and cooked potatoes. The doctor quickly realized that the more tender and cooked the food, the more swiftly and easily it passed through the bowels. One experiment was especially telling. At noon one day, Beaumont introduced both boiled beef and raw beef into St. Martin's stomach. By 2 PM, the boiled beef was gone, but the raw beef exhibited only slight maceration.

St. Martin's stomach showed that consuming cooked foods makes digestion easier and more efficient. Because it's already warmed and chopped into pieces, it saves the body work. According to Wrangham, that's why human colons are so much shorter than those of other primates. Digestion is more efficient, which makes longer digestive tracts unnecessary. It's also why humans have small, blunt teeth and weak jaws compared to apes, who spend their days chewing through tough, raw food.

THE TRUTH ABOUT RAW FOODS

The flip side of eating cooked foods is that humans are no longer adept at eating raw meals. Simply put, our tummies are just not made for that anymore. But the notion runs contrary to the growing raw food movement in America. Proponents claim that strict raw food diets can lower cholesterol and blood pressure and promote weight loss -all of which is true. But the unbalanced diet comes with problems. A recent German study found that, of the women they followed on totally raw diet, 50 percent of them ceased to menstruate entirely. Additionally, men on raw food diets reported significantly decreased sex drives. So, while catwalk-model proportions might be all the rage, for our ancient ancestors, such reduced reproductive capabilities would have been disastrous.

In the end, we don't just need hot meals to satisfy our hunger; we need them to fuel our libidos. In a sense, prepared foods are old-fashioned aphrodisiacs. For Homo sapiens, cooking is as natural as the birds and the bees.

A Window Into the Stomach -and the Soul

So, whatever happened to Alexis St. Martin, the man whose stomach helped the world understand digestion? In 1833, more than a decade after he started working with Dr. William Beaumont, St. Martin cut ties with the medical community. The man with the transparent stomach got fed up with being a scientific freak show. When he died in 1880, at the age of 86, St. Martin's family kept his body for four days to make sure it rotted, and then buried it in an unusually deep grave, hoping to deter any medical interest in his remains. 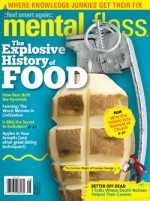 The article above, a portion of the special section Shocking Moments in the History of Food written by Linda Rodriguez McRobbie, is reprinted with permission from the July-August 2011 issue of mental_floss magazine. Get a subscription to mental_floss and never miss an issue!

This is my idea about raw foods, and this article actually supports my hypothesis: That because our bodies aren't used to eating raw, we digest less of it (and our bodies have to work harder to digest what there is) and as a consequence lose weight.
Abusive comment hidden. (Show it anyway.)
Wow, Will L, That was very exuberant. Not that I disagree , mind you.
Abusive comment hidden. (Show it anyway.)
SEE!

→ Vegetarians and raw foodies ARE more primitive and less-highly-evolved than carnivores.